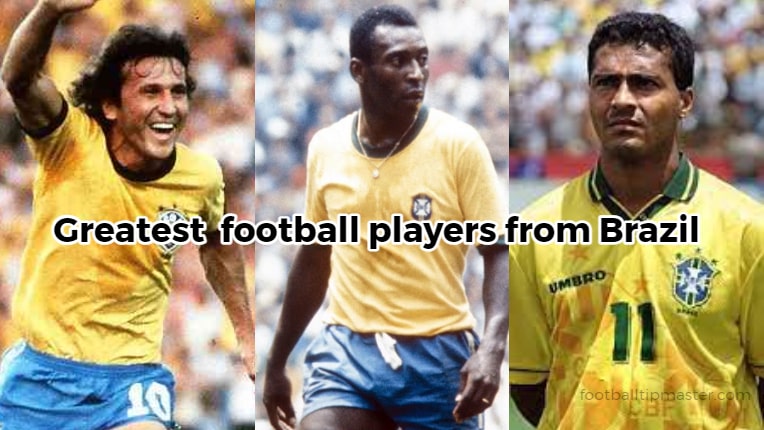 Brazil’s contribution to football is not just its flair, of course. The Brazilian team has not only been blessed with the most brilliant players, but it also won more World Cups than anyone else. The Brazilian team won 5 world championships and Pele was elected Athlete of the century by the International Olympic Committee. Created in 1914, Brasileirao, is still one of the five most popular leagues in the world even today. Its contribution to soccer is enormous. Brazil has exported and continues to export an endless number of talented players. But some of them are still remembered for their greatness. These players have not only left their mark but also changed the game. So let us take a look at the top 5 greatest football players from Brazil.

Who are the 5 best Brazilian footballers?

1. Pele- The greatest footballer of all time

Pele is the most successful and popular player in football history. During his playing days, he was the best-paid athlete in the world. Known as “The Black Pearl” and “The King of Football”, he is the best soccer player of all time. He scored 1281 goals in 1363 games. Because of that, the Guinness World Records listed him for the most career goals scored in football.

The first football he got was a sock stuffed with newspaper and tied with a string. At age 11, he joined his first soccer club and promptly scored five goals in his first match. In 1956 at the age of 15, he joined Santos Futebol Clube and became an instant success. He became an overnight sensation as a member of the Brazilian national squad at the 1958 World Cup in Sweden. 17-year-old Pele scored six goals in four matches as Brazil took the cup. In 1959 Pele became an international star while leading Santos to victory. He is the all-time leading goalscorer for Brazil, with 77 goals in 92 games. At the club level, he is also the record goalscorer for Santos and led them to the 1962 and 1963 Copa Libertadores.

Ronaldo Luís Nazário de Lima, also known as Ronaldo, is a retired footballer from Brazil who played as a striker. He became FIFA World Player of the Year three times and won two Ballons d’Or. Also, he was known for his dribbling speed, feints, and finishing. Ronaldo holds the record for most goals scored in World Cup history with 15. At the club level, he is the record goalscorer for Real Madrid.

Ronaldo got worldwide attention for his goal against Compostela on 7 November 1996 and also his two goals against Lazio in the 1999 UEFA Cup Winners’ Cup Final. He became FIFA World Player of the Year in 1996, 1997, and 2002, becoming one of only three men to win three or more FIFA World Player of the Year awards. He was the first player to win it three times. Since retiring from football, Ronaldo has continued his work as a United Nations Development Programme Goodwill Ambassador. It focuses on raising awareness of combating hunger in third-world countries.

Ronaldo de Assis Moreira (born 21 March 1980), commonly known as Ronaldinho, is a professional footballer and ambassador for Barcelona. He played as an attacking midfielder but sometimes deployed as a forward or a winger. Often considered one of the best players of his generation and regarded by many as one of the greatest of all time, Ronaldinho won two FIFA World Cups. He also won a Ballon d’Or and a FIFA World Player of the Year award, among other honors.

He acquired his nickname Ronaldinho because he was often the youngest and the smallest player in youth club matches. His main playing attributes were his creativity, vision, passing, crossing ability, dribbling skills, feints, and accurate free kicks. Ronaldinho began his career with Gremio. Later he spent the bulk of his career with European clubs: Paris Saint-Germain, Barcelona, and Milan. Ronaldinho also returned to Brazil to play for Flamengo and Atlético Mineiro before moving to Mexico to play for Querétaro. He retired from football in 2018.

Manuel Francisco dos Santos, known by the nickname Garrincha (Portuguese: little bird), played as a right-winger. He is the best dribbler in football history. Also, he had an extraordinary influence over the game. Garrincha is often considered one of the greatest dribblers, alongside Alfredo Di Stéfano, George Best, Lionel Messi, and Diego Maradona. Garrincha is one of the greatest footballers of all time. FIFA 100 list of the world’s greatest living players included his name in 2004.

Pele has described him as “the most beloved sportsman” in Brazil’s history and listed him as one of the 125 greatest living footballers at a FIFA awards ceremony. According to Pelé, he was “the greatest player ever” beside himself. Time magazine’s list of 100 athletes who defined the 20th century also included his name on the list.

Zico was born on 3 March 1953, in Rio de Janeiro, Brazil. He started his club career in 1971 when he was 18 years old. Zico played for Flamengo for 12 years until 1983 and scored 485 goals in 539 appearances, which makes him the all-time top scorer for the club, and a fans’ favorite. The year after, Zico moved to Udinese in Italy where he played two seasons before moving to Sumitomo Metals in Japan where he spent three seasons before retiring in 1991 at the age of 38.

He was known for accurate passing, free kicks, and dribbling ability. When playing for Flamengo, Zico was a key player during the most glorious period of the club’s history, culminating with victory in the 1981 Intercontinental Cup Final against Liverpool F.C. It is one of the greatest teams of all time. This title marked the pinnacle of Zico’s career as a player. However, it did not bring him any silverware during his subsequent spell abroad in Italy.

Also, check out: the best freekick takers in Premier League.

We hope you enjoyed our article on the best Brazilian soccer players. Please drop your opinions in the comment section. Wikipedia is the source of information for this article. This topic is subject to change, however, our website (www.footballtipmaster.com) makes no guarantee for the accuracy of the information.