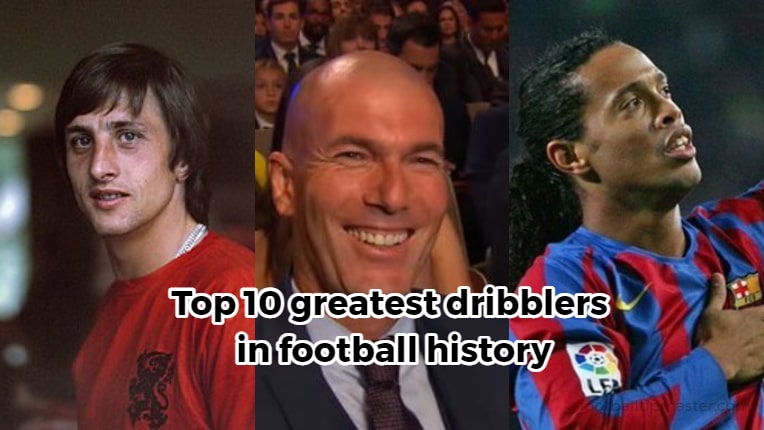 The view of a sportsperson making his or her way past three or four defenders is enough to make you a big fan of this wonderful sport. Therefore, only a few people in the soccer game have perfected the skill of dribbling. This article will provide you with good insights into the top 10 best dribblers in football history.

Sir Stanley Matthews was one of football’s first wonderful dribblers. He was awarded the title of,  “The Wizard of the Dribble”, and “The Magician”. During his time, his ball talents were unrivaled. Stanley could beat any defender with his feints, velocity, and dribbling.

He won 9 British home championship titles. Stanley is the first winner of the awards, European Footballer of the Year, and the Football Writers’ Association Footballer of the Year. He has 52 caps and scored 11 goals in 23 years of global play. An amazing professional life that culminated in the first Ballon d’Or in the year, 1956. He played in his whole professional life with the clubs: Blackpool FC and Stoke City.

Ronaldo de Assis Moreira, also called Ronaldinho popularly, is a legendary dribbler. He is a skillful and talented football player, who makes the job very hard for the defenders. Ronaldinho could adjust in any circumstance owing to his quickness and a long series of dribbling. He won two La Liga titles and a Champions League at Barcelona.

“Ronnie” has also had a successful global professional life in Brazil. Over 14 years, he was chosen 97 times and managed to score 33 times. He was one of the vital factors for Brazil’s world cup victory in 2002.  After finishing 3rd in the Ballon d’Or in 2004, he eventually gained it in 2005. He was with the clubs: PSG, Barcelona, and AC Milan.

Indeed, he is regarded as the greatest player of the 20th century. Pele was victorious in the World Cup three times, along with the Seleção. He was mostly with the club, Santos FC. Pele won two international awards, six Brazilian championships, and two Copa Libertadores.

Diego Armando Maradona and Lionel Messi are the greatest football players in the country of Argentina. Every football fan knows Maradona. He is also one of the best-attacking midfielders.

After getting the Argentine championship award, he won his first title with Boca Juniors. He won the UEFA Cup and the Italian Cup in 1989. Both Messi and Maradona have won the Golden Ball award at the FIFA World Cup and also in the FIFA U-20 World Cup. Maradona won in 1979 and 1986, while Messi followed suit in 2005 and 2014.

Lionel Messi is one of the highest goal scorers, and also one of the top 10 best dribblers in football history. He can also astonish the most talented defenders with his dribbles and feints. His agility, speed, and talent – all combined make him one of the richest football players in the world. He has won the Ballon d’Or prize 6 times in his professional football career. He is the greatest scorer in the club, FC Barcelona – by giving 618 goals in 705 tournaments.

Unlike many other football heroes, who are recognized for their goals, this dribbler is recognized for his marvelous dribbling. His opponents would be outmaneuvered time and again by his sudden acceleration and various body feints. Therefore, his contemporaries nicknamed him “The King of Dribble.”

Ronaldo Nazario is also known as El Fenomeno, as people called him fondly, was popular for his amazing goal-scoring talent. He won the FIFA world player of the year award 3 times, and the Ballon d’Or award 2 times. Ronaldo got the  Ballon d’Or prize in 1997 when he was only 21 years of age. So, Nazario was the youngest football player to have got the award.

Cruyff had an inexplicable capacity to identify flaws in the opponent’s defensive strategy. When he saw a gap, he would unexpectedly speed up and find his way into the penalty zone. Johan was such a good dribbler that his signature move, the “Cruyff turn,” was labeled upon him. He won the European footballer of the year award in 1971, 1973, and 1974. Cruyff had an NGO to motivate youngsters to take part in sports. Also, the Johan Cruyff institute gives education in sports management.

George Best is a Northern Irish soccer player. He is a real champion among Manchester United fans, having spent the bulk of his professional life with that club. Best was the club’s most successful and popular player season, allowing the Red Devils to win two games and, most notably, the Champions League in 1968. So, he was inducted into the English football hall of fame in 2002.

Zinedine Zidane is one of the top 10 best dribblers in football. He was popular for his leg passes and his favorite move. Zidane won two Italian championships with the Bianconeri. He won the Ballon d’Or award in 1998.

We hope you enjoyed our article on the Top 10 best dribblers in football. Please drop your thoughts in the comment box. The information for this article is acquired from sportmob.com. Since this topic is subject to change, our website (www.footballtipmaster.com) provides no guarantee for the accuracy of the information.