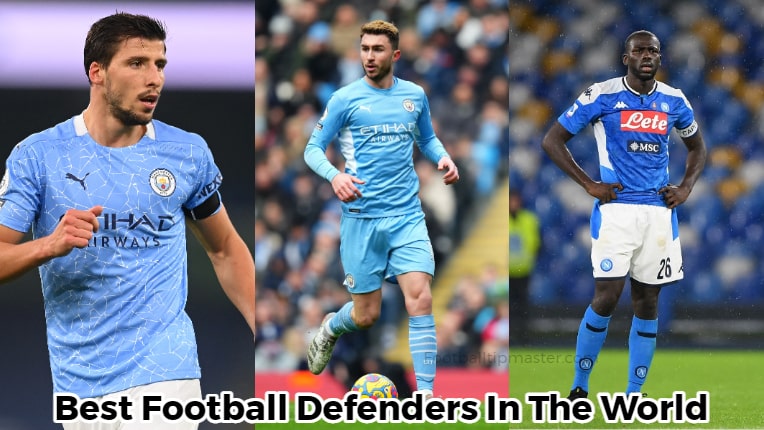 Here are our picks for the top five best football defenders in the world right now. Any defender’s primary role in any football team is to make the first break in the opponent’s attack. They primarily prevent the opposing striker from entering their goal (D) box and scoring. A defender can play in a variety of positions, including center-back, wing-back, and side-back. However, the center-back position is the most important in any team’s defensive formation. They not only stop the opponent’s attack, but they also pass the ball to the midfielders. And now for our exclusive list of the world’s current best football defenders.

Who Are The Best Football Defenders In The World Right Now?

Ruben Dias is regarded as one of the world’s best defenders, and he is known for his strength, leadership, passing, and aerial ability. Dias was a product of Benfica’s youth academy. He joined Benfica B in 2015, was promoted to the first team in 2017, and was named Primeira Liga’s Young Player of the Year in 2018. After a storming first year at Manchester City, he swept the Football Writers’ Association and Premier League Player of the Season awards in 2020/21. He was rewarded by being named to City’s captaincy before the start of the season, and he has continued to be a striker’s worst nightmare in the Sky Blues’ first 11 Premier League games.

Aymeric Laporte is the youngest professional footballer who plays for Premier League club Manchester City as well as the Spain national team. He previously played for Athletic Bilbao and Basconia. While he was left out of Manchester City’s lineup in 2020, a change in international allegiance from France to Spain via his great-grandparents saw him selected for Euro 21. Regular football was exactly what the doctor ordered, and he’s made an immediate impact in the Premier League, replacing John Stones alongside Ruben Dias.

He began his soccer career as a member of the youth team at SR Saint-Die. Senegal International soccer player best known for his time as a centre-back for both Serie A club Napoli and the Senegal national team. He had made 35 appearances for Senegal’s national team as of late 2019. Luciano Spalletti’s Napoli has started the season unbeaten and top of Serie A after 11 games. Kalidou Koulibaly, the organizer of a defensive unit that has only conceded three goals so far, has only enhanced his reputation, which has seen him linked with Everton, Liverpool, Manchester United, and Chelsea in the last year. The Senegalese player is described as an “exceptional leader” by Spalletti.

Marquinhos is a Brazilian footballer who currently plays as a defender for the Ligue 1 club PSG (Paris Saint-Germain), where he also serves as captain. He is well-known for his quickness, technical abilities, foresight, and intelligence. While the addition of Achraf Hakimi, Sergio Ramos, Georginio Wijnaldum, Donnarumma, and Messi to a squad that already included Kylian Mbappe, Verratti, Neymar, and Di Maria may have given Mauricio Pocchetino the most talented group of players in Europe, his captain Marquinhos has been the defensive standout this season. The calming presence of the Brazilian at the back has helped PSG extend its lead over second-placed Lens. He is joint third in Ligue 1 in blocks and seventh in clearances.

Antonio Rudiger is a German footballer who plays for Premier League club Chelsea as well as the German national team. Rudiger began his career with VfB Stuttgart’s reserves in the 3. La Liga and the first team in the Bundesliga. The 28-year-old was a pivotal figure in last season’s Champions League triumph, and he played a key role in reaching the final. Rudiger spoke to The Athletic about his feelings after winning the Club World Cup.

Thomas Tuchel may have been fired from his previous two jobs at Borussia Dortmund and Paris Saint-Germain, but he’s proving to be a perfect fit at Chelsea and has worked wonders with many of the current squad. Antonio Rudiger has been the pick of a Blues defence that has conceded just four goals in 11 games to lead them to the Premier League title (and just one in four Champions League clashes), and the German centre-back could easily have been joined on this list by the rejuvenated Thiago Silva or up and coming Trevoh Chalobah, who have also impressed.

FAQs About Best Football Defenders In The World Football

Q. What is the role of a defender in football?

A defender in association football, also known as soccer, primarily blocks the opposing team’s attack. They primarily operate below the centerline to effectively negate any attacking formation buildup by the opponents.

Q. Who is the best football defender in the world right now?

Both Manchester City’s Ruben Dias and Aymeric Laporte are regarded as the best football defenders in 2022. They both demonstrated their talent on the field and aided their respective teams in reaching the pinnacle of success.

Q. Who is the greatest football defenders of all time?

In a new fan poll, AC Milan and Italy legend Paolo Maldini have been named the greatest defender in football history. Maldini spent over 25 years as a player for the Serie A giants, winning seven Serie A titles and five Champions Leagues.

Q. Who is the most expensive defender in world football?

Virgil van Dijk of Liverpool is the most expensive football defender in the world right now ($104 million/£75 million from Southampton).

We hope you enjoyed our article on the best football defenders in the world right now. Please drop your thoughts in the comment box. The information for this article is acquired from Wikipedia. Since this topic is subject to change, our website provides no guarantee for the accuracy of the information.