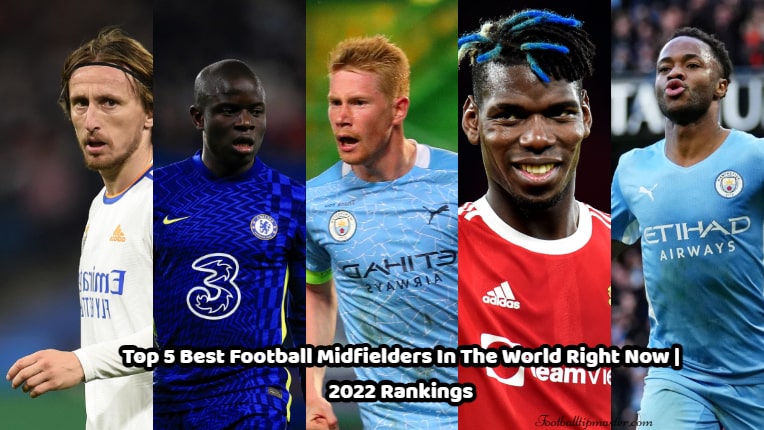 Best Football Midfielders: In the center field, midfielders are the central backbone of any team’s formation. They can effectively construct an attack on the opposing side. In football, a Centre Attacking Midfielder role is very important. A centre midfielder who primarily plays offensively and is typically positioned in an advanced midfield position, usually between central midfield and the team’s forwards. CAM players frequently assist their forwards in scoring goals.

Since the beginning of international football, midfielders have been one of the central playmaking positions. From Zidane to Ronaldinho, some of the best footballers in history have played in this position. Here are the top football midfielders in 2022.

2018 Ballon d’Or winner Luka Modric definitely deserves the top spot among the best football midfielders. He is currently playing for Real Madrid in LaLiga. What’s more, he is also the central midfielder for the Croatian national football team. After starting his football career at Dinamo Zagreb, he joined Tottenham Hotspur in 2008. After that, he joined Real Madrid in 2012. Luka Modric recently assisted the Croatian side take second place in the 2018 FIFA World Cup. He also won both the Best FIFA Men’s Player Award and the World Soccer Player of the Year in 2018. He also won the UEFA Men’s Player of the Year award for the 2017-18 season. Modric also won both the IFFHS World’s Best Playmaker and the AIPS Athletes of the Year in 2018.

N’Golo Kanté is without a doubt one of the best football midfielders in the world right now. He currently plays for Chelsea in the Premier League and France’s national team. Kante began his senior football career with Boulogne in 2012. He joined Caen after a single season before joining Leicester City in 2015. In 2016, he finally accepted a transfer to Chelsea. N’Golo Kanté played a key role in France’s World Cup victory in 2018. In addition, he assisted them in finishing second in the 2016 UEFA European Championship. In 2018, he was named a Chevalier de la Légion d’honneur. He also recently won the ESPN Midfielder of the Year award in 2019. Kante first gained international attention after winning the French Player of the Year award in 2017.

Kevin De Bruyne, one of the most attractive footballers, currently plays for Manchester City in the Premier League. In addition, he is a member of the Belgian national football team. He began his senior footballing career with the club’s senior side in 2008 as a product of the Genk youth academy. In 2012, he joined Chelsea. He then joined VfL Wolfsburg before joining City in 2015.

Paul Pogba, one of the best football midfielders of all time, is currently playing for Manchester United, one of the Premier League winners. He also plays for the France national team. Pogba began his senior football career in 2011 with Manchester United’s first team after graduating from the Manchester United youth academy. He then spent four years with Juventus before rejoining the Red Devils in 2016.

Without a doubt, Raheem Sterling is one of the best football midfielders in modern years. He currently plays for Manchester City in the Premier League. In addition, he is a member of the England national football team. He began his football career at Liverpool’s youth academy. And not long after that, he was promoted to the first team. In 2015, he joined Liverpool and quickly established himself as an important member of the squad.

So, without further ado, here is our exclusive list of the world’s top 5 best football midfielders in 2022. We hope you found our article interesting. Please share your thoughts in the comments section below. This page’s content is subject to change at any time. Our website makes no guarantees about the information’s accuracy.