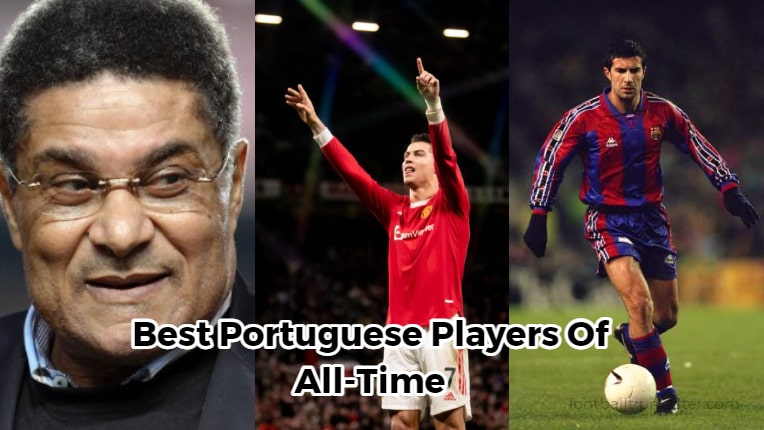 Portugal is one of Europe’s most powerful football-playing countries. Their national soccer league is not as competitive or remunerative as that of their neighbors in Spain. But, indeed, Portugal is home to top clubs such as  Sporting Lisbon, Benfica, and FC Porto. Both Porto and Benfica have clinched trophies in the European Cup and Champions League. This article will provide you with good knowledge about the best Portuguese players of all time.

Interesting facts about the best Portuguese Players of all-time

Cristiano Ronaldo dos Santos Aveiro, fondly known by all football fans as Cristiano Ronaldo or Ronaldo is the best of all the Portuguese football players. He is also regarded as one of the greatest football players in the whole world. Ronaldo was born on 5th February 1985. He plays as a forward. Ronaldo is also the captain of the Portugal soccer squad. Ronaldo plays for the Premier League club, known as Manchester United.

Earlier, Cristiano started his football career with Sporting CP when he was only seventeen years in 2002. He was victorious in the FA Cup in the first tournament. Ronaldo also won 3 Premier League championships continuously – in 2006-07, 2007-08, and 2008-09. Also, he championed in the first FIFA World Cup played with his club in 2008 December. Ronaldo also got his first Ballon d’Or in 2008. He was also the most expensive football sportsperson when he changed his club from Manchester United to Real Madrid in 2009 July. In the year 2011, he got his first trophy with Real Madrid .i.e the Copa Del Rey. Then, he was victorious in his first La Liga tournament. Then, he triumphed in the  Supercopa de España.

Ronaldo’s contributions to his club, and goals scored by him

He was the first football sportsperson to win the UEFA Champions League 5 times. Ronaldo had scored his first goal at UEFA Euro in the year 2004. The first football game in which he took part was the FIFA World Cup in 2006. He became Portugal’s full captain in 2008. Indeed, he made a significant contribution to his nation, Portugal in winning their first important global trophy in Euro 2016. Then he helped his Portuguese national team win the UEFA Nation’s League.

Ronaldo played his first professional football tournament in opposition to Inter Milan on 14th August of the year 2002. Afterward, he came to the club Manchester United from Sporting CP on 12th August of 2003 on getting £12.24 million. The free-kick style was his first secured goal with the club, Manchester United. Ronaldo scored this goal on 1st November 2003 in a 3-0 victory against Portsmouth.

Rui Costa was a renowned midfielder for 2 Italian clubs, Fiorentina and AC Milan, and became one of the most graceful midfielders of his millennium. Earlier, he began his professional life with Benfica before joining Fiorentina in 1994.

Also, he entered AC Milan in 2001 and stayed with them for five periods. With Milan, he won one Serie A and one UEFA Champions League award. In 2008, he returned to Benfica. He retired with 9 goals in 75 appearances. Indeed, Rui was a football player in Portugal’s golden generation. Moreover, he played as a midfielder in Euro 2004 and World Cup 2006. In 94 global manifestations for Portugal, he managed to score 26 goals.

3. Luis Figo (One Of The Best Portuguese Players Of All-Time)

Luis Figo is one of the best Portuguese players of all time. He is one of the best sportspeople from the Golden Generation of Portugal. He gave his best performance for both the Spanish football clubs Barcelona and Real Madrid. Figo started his professional life with Sporting before joining Barcelona in 1995.

Figo was primarily a right-winger and had fast dribbling capabilities. In 248 games for Barcelona, Figo scored 45 goals and was awarded 2 La Liga titles. Also, he received the Ballon d’Or in 2000. Thus, in the period of his five tournaments with Real Madrid, he won two La Liga titles and one UEFA Champions League title.

Ricardo Alberto Silveira de Carvalho was born on 18th  May 1978. He is one of the best Portuguese football players of all time. Ricardo played as a center-back. Earlier, Carvalho’s world soccer career started on 11th October 2003, with a friendly game against Albania.

Moreover, he depicted Portugal in 3 UEFA European Championships and 2 FIFA World Cups. Furthermore, he was a member of the squad that was awarded the trophy in the finals of the 2016 UEFA Euro. Also, in August 2010, he migrated to Real Madrid for £ 6.7 million after 6 years with Chelsea. He had won 2 national titles under Mourinho before the first free transfer to Monaco in 2013.

5. Eusebio (One Of The Best Portuguese Players Of All-Time)

Eusebio made Portugal one of the most powerful and successful football-playing countries in the 1960s. He played for Benfica, and he made a significant contribution to their European Cup victory in 1962. In addition to that, Eusebio managed to win eleven Portuguese 1st division championships with Benfica. Furthermore, he had scored 473 goals in 440 matches with them. In 1965, he was also awarded the Ballon d’Or. He was also named one of the top ten soccer players of all time by the IFFHS in their world players of the century list.

You can also read this article to know the Top Ten Most Iconic Football Stadiums Around The World | All-Time.

We hope you enjoyed our article on the Best Portuguese Players Of All-Time | Updates. Please drop your thoughts in the comment box. The information for this article is acquired from thetoptens.com. Since this topic is subject to change, our website (www.footballtipmaster.com) provides no guarantee for the accuracy of the information.