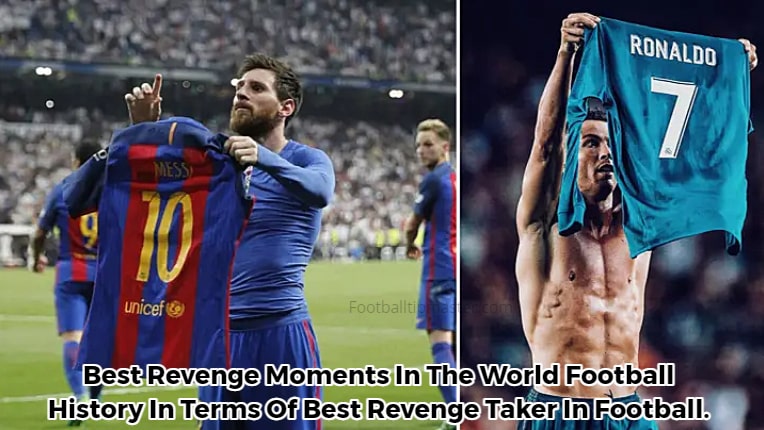 So, here is a list of some of the best football revenge moments in history. Football, like every other sport, has its atmosphere. Just like in any other game, you tend to outperform your opponents in every aspect of the game. However, in some cases, things become a little tense.

We’ve all heard the adage, “Revenge is a dish that tastes best when served cold.” It is also said that vengeance for someone is best when vengeance brings happiness to someone. Revenge is a part of every game, and football is no exception. There are times when the revenge celebrations take precedence over the game itself. Revenge after scoring a goal or winning a match is common and unlikely to fade anytime soon. Let’s take a look at the top 10 best revenge in football history.

Lionel Messi, a prolific goal scorer and an amazing person in football history, is an innovative, special, and precise player who began his football career as a simple boy in 1995. And he joined Barcelona at the age of 16 years. He was a member of the club and earned the club’s name and fame. Previously, he was not allowed to prove himself, but in better times, he was given the opportunity five times as a substitute and he proved himself to be a good and deserving member of his team. He demonstrated that he was an outstanding and remarkable football player.

Lionel Messi left no stone unturned in his quest to score goals for his team whenever the opportunity arose, and he is the player whose name has appeared on the score sheet every time he played a match against a strong opponent. He is the player who plays not only for himself, but also for his fans, crowd, colleagues, and team. Along with this, when he first came off the bench, he played extremely well and proved himself, so his status as a footballer is justified. Lionel Messi struggled a lot to achieve his goal of scoring many goals on a larger field in front of a crazed world.

Messi’s opportunities increased over time, and he continued to score more and more goals for his team. He had reached the point where he was well-known to every football game watcher and every person who enjoys football games. Many critics compare Messi and Ronaldo these days, but each player has his value and role. Both players are doing well for their clubs both of the most daring, courageous, and decisive players in football history.

Who is the best revenge taker in football?

It’s a rivalry that doesn’t need an introduction. Anyone who follows football knows what stage these two legends share. This vengeance dates back to 2017 when Lionel Messi took off his shirt and showed it off to the fans after scoring the game-winning goal in the El-Classico. Cristiano Ronaldo didn’t forget, and in August 2017, he repeated the act in front of the fans, much to their chagrin. Cristiano Ronaldo won both the match and the cup, making the retaliation even sweeter.

This revenge occurred in the 2019-20 Champions League round of 16 when Borussia Dortmund’s Erling Haaland scored twice in the first leg to give the team a 2-1 victory over PSG. In his “calm” celebration, he celebrated both of his goals and even stated that Paris was his city. During the second leg, PSG overturned this result, and the entire team, especially Neymar JR, celebrated in the same way, declaring that Paris is their city, not his.

3. Diego Simeone vs Cristiano Ronaldo In The 2018-19 Champions League.

Roman Weidenfeller taunted Mario Balotelli during a match, indicating that he would miss the penalty and saying various things to distract him. It was pointless because he calmly dispatched the Penalty and pretended to stop talking as if it didn’t matter to him.

In 2011, Luis Suarez did not shake hands with Patrice Evra before a match between Liverpool and Manchester United. The incident came after Suarez was reported to have made racist comments about Patrice Evra. Patrice Evra jumped in front of Suarez and celebrated as if he had no limits.