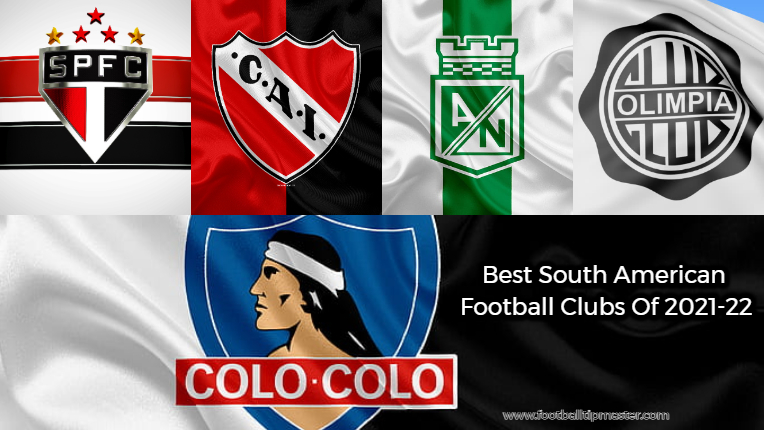 We need to know why South America is so obsessed with football. In the latter half of the 19th century, there was a massive influx of European immigrants into South America, particularly Argentina, Uruguay, and Brazil. There were British immigrants among them, and they brought football with them. Football is one of the most popular sports in South America, as well as a professional sport held in high regard by the continent’s people. The following are the top 10 most popular & the best South American football clubs.

Sao Paulo from Brazil is ranked first among the top 10 most popular & the best South American football clubs. When it comes to Latin football, Sao Paolo is the absolute powerhouse. It is also one of the five Brazilian clubs that have never been relegated. It has 21 league titles, six Brasileirao titles, three Copa Libertadores titles, and one Copa Sudamericana title. Sao Paulo also won one Supercopa Libertadores, one FIFA World Club Cup, two intercontinental cups, one COPA CONMEBOL, two Recopa Sudamericanas, and one COPA Masters CONMEBOL. Aside from such a collection of silverware, it is also Brazil’s second most financially valuable team.

Independiente football club from Argentina is ranked second among the top ten most popular and best South American football clubs. It is one of Argentina’s most historic clubs, having won 16 Primera titles and 9 National Cups. They also won seven Copa Libertadores (record number of times and only club to win it four times in a row). Independiente won three Copa Interamericanas, two Supercopas Sudamericanas, two Intercontinental Cups, and one Sudamerican Recopa. Its silverware alone makes it Argentina’s most important club. However, it has recently declined to the point of relegation but has since recovered under Hugo Moyano. And it’s starting to look as menacing as it did in its early days.

Atletico Nacional of Colombia is ranked third among the top ten most popular $ the best South American football clubs. Their recent surge in performance has resulted in them winning seven league titles in the last decade. It also elevated the club to the ranks of Latin football’s major powers. The club is best known as the birthplace of legendary goalkeeper Rene Higuita, who was known for his sweeping style and dribbling despite being a goalkeeper.

Olimpia of Paraguay is ranked 4th among the top 10 most popular & the best South American football clubs. Olimpia, like the other teams on the list, has an illustrious history. It has 43 league titles and 3 Libertadores to its name. The Olimpia football club reached its height of success in 1979 when it won the League, Libertadores, Copa Interamerica, and Intercontinental Cup. Its most famous export is Roque Santa Cruz, the current captain of the national team and Paraguay’s all-time leading goal scorer.

Colo-Colo from Chile is ranked fifth among the top ten most popular and best South American football clubs. Thirty-two league titles, 11 cups, and one Libertadores victory are all testaments to Colo-illustrious Colo’s history, and the club is regarded as one of Chile’s best. Colo-Colo is a club to be reckoned with that plays Chile’s style of fast and attacking football. It has been instrumental in cultivating a lot of local talent for the national side.

Penarol from Uruguay is ranked 6th among the top 10 most popular and best South American football clubs. Penarol football club has been a dominant force in Uruguayan football, winning 50 league titles and 5 Copa Libertadores. Despite their great history, Penarol has not won a continental title since 1987 (finishing runner-up to Santos in 2011), so they are currently in a slump. The most famous player associated with Penarol is undoubtedly Alcides Ghiggia, who scored the game-winning goal against Brazil in the 1950 World Cup to eliminate them.

Boca Juniors of Argentina is ranked seventh among the top ten most popular and best South American football clubs. Boca Juniors’ impressive title tally may pale in comparison to River’s 33 league titles, but it is at the continental level where they have shone with four Libertadores. They have been named the best South American club of the twenty-first century by the International Federation of Football History and Statistics. Burdisso, Tevez, Palacio, and even the great Diego Maradona have all come from here over the years.

Club Atlético River Plate of Argentina is Latin America’s most successful club in terms of titles won, having won 36 league titles and four Copa Libertadores, but they have struggled in recent years. River Plate is now a fallen giant, having produced many good European players such as Ortega, Saviola, Crespo, and others, but it was di Stefano who began his career here and went on to become a household name around the world.

Corinthians of Brazil is ranked ninth among the top ten most popular and best South American football clubs. Corinthians is now the largest club in Brazil as well. And they certainly have the silverware to prove it in their cabinet. This club has won seven Brasileirao titles, three Libertadores titles, and the FIFA World Club Cup (by defeating Chelsea). Many famous players have worn this club’s colors, including Carlos Tevez, Cristiano Ronaldo, Javier Mascherano, and Socrates.

Santos from Brazil is ranked number ten in the top ten most popular and best South American football clubs. Santos is one of Brazil’s most successful and historic clubs, having won the domestic title eight times, the Copa Libertadores three times, and the Copa de Brasil once. Not only that, but it has given birth to some of the greatest football players of all time, including Pele, Robinho, and Neymar. Even though Neymar Jr has left for Barcelona to join PSG. The team still has enough young talent to compete with the best in Brazil.

Q. How many countries are there in South America?

Q. How many national teams are in South America?

The Copa América is governed by the Confederación Sudamericana de Futbol (commonly known as CONMEBOL), and the tournament field consists of the 10 CONMEBOL national teams Argentina, Bolivia, Brazil, Chile, Colombia, Ecuador, Paraguay, Peru, Uruguay, and Venezuela, as well as two additional national teams that are invited to participate.

Q. What is the best football club in South America?

Flamengo of Rio de Janeiro, Brazil, had approximately 44 million fans in 2021-22, making it the most popular soccer club in South America.

Q. What is the name of football in South America?

The sport, known as ‘fútbol’ in Spanish and ‘futebol’ in Portuguese, arrived in Latin America in the late 1800s and has since become deeply ingrained in the region’s identity and culture. Brazil, Argentina, Uruguay, and Colombia are currently the most valuable teams in the region.

Q. Is there a South American Soccer League?

It has the fewest members of any FIFA confederation, with only ten member football associations. CONMEBOL national teams have won nine FIFA World Cups (five by Brazil, two by Uruguay, and two by Argentina), and CONMEBOL clubs have won 22 Intercontinental Cups and four by Argentina.

Q. How many football clubs are there in South America?

The Argentine Football Association organizes the Primera División, the highest level of the Argentine football league. It was founded in 1893 and currently has 30 teams, but it is expected to reduce to 24 teams by the 2019–20 season.