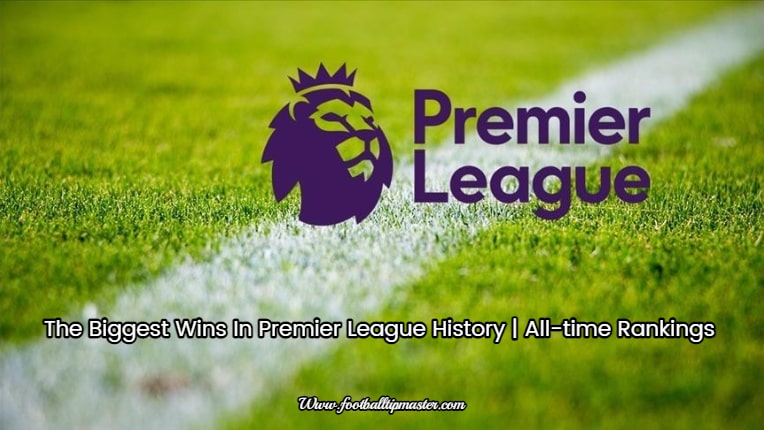 Pep Guardiola’s Manchester City will be remembered as one of the best attacking teams in Premier League history, Manchester City has reached the century goal mark twice during its term. They’re not slowing down, and during the 2021-22 season, the Citizens were involved in one of the most lopsided and one of the highest-scoring matches in Premier League history, both of which occurred in the same month. On December 14, Man City defeated an undermanned Leeds United 7-0, falling two goals short of tying the record for most goals scored by a team and widest margin of victory. Less than two weeks later, Man City led Leicester City 4-0 after just 25 minutes, and the match ended in an entertaining 6-3 final, the third most goals in an EPL match.

As Pep Guardiola’s men continue to produce elite goal-scoring output, here is an updated and exhaustive list of the biggest wins in Premier League history and the most goals ever scored in a Premier League match since the Premier league’s relaunch in 1992-1993 season.

Most Goals In A Premier League Match | All-time Rankings

Sir Alex Ferguson was forced to start out-of-form Mark Hughes alongside new signing Andy Cole, who had only five goals in 22 league appearances in 1994-95 before the game. Andy Cole had only two goals in six league appearances for Man United after joining from Newcastle for a then-British transfer record fee of £6 million. Cole had scored twice in 12 Premier League games before this match, including his time at Newcastle, and the pressure was on him to find the goals in Cantona’s absence. Andy Cole became the first player in Premier League history to score five goals in a single game, while Mark Hughes added a brace. Paul Ince also scored controversially, capitalizing on a quick free to catch a down, Craig Forrest.

Spare a thought for goalkeeper Craig Forrest, who let in 9 goals in this game and then let in 7 more in West Ham’s 7-1 defeat to United at Old Trafford in April 2000. Peter Schmeichel, who was in goal for Manchester United on the day of the 9-0 thrashing, only conceded once all season at Old Trafford in his 17 Premier League appearances there, and it came in his final game there in 1994-95, with Southampton’s Simon Charlton breaking a fresh record with just 85 minutes remaining in Man United’s home season.

On the 19th of September, 1999, it appeared that something had to give at St James’ Park. Newcastle and Sheffield Wednesday had both had a disastrous start to the season, with each winning one point and Wednesday trailing the Magpies by one point on goal difference alone. Newcastle started the 1999/2000 season with four straight defeats, prompting manager Ruud Gullit to resign. Relegation was a genuine concern by mid-September, so Sir Bobby Robson was brought in. The 66-year-old narrowly lost his first game as manager at Stamford Bridge, but the Godfather of the Gallowgate scored a famous victory on his St. James’Park debut against Sheffield Wednesday.

Alan Shearer’s five goals, two of which were penalties, along with efforts from Aaron Hughes, Kieran Dyer, and Gary Speed, helped the Geordies turn around their season and finish 11th. As a result, they finished the season with the third-most goals (63). Sheffield Wednesday was relegated as a result of the match, and they finished their ninth consecutive top-flight season with a draw at Highbury on the season’s penultimate day.

We had to wait a decade for the next biggest wins in Premier League history with 8 or more goals, but Wigan Athletic spoiled us with 2 in six months. On a Sunday afternoon in November 2009, the first of these was a second-half surrender at White Hart Lane. Tottenham Hotspur F.C. led 1-0 after 50 minutes, with Wigan Athletic probably thought that with a little luck, they could come away from north London with a point. Jermain Defoe put an end to that with a 51st-minute strike, followed by four more goals in the next 36 minutes to propel Spurs to a 9-1 victory.

Tottenham F.C. remains the only Premier League team to have scored more than six goals in the first half, and Jermain Defoe is the only player in the Premier League history to have scored 5 goals in a single half. Wigan goalkeeper Chris Kirkland saved both of Defoe’s first-half shots on goal, but had no such luck in the second half, with the diminutive striker scoring on all five attempts. Despite losing two games by an eight-goal margin, Wigan F.C. finished the season six points clear of the drop zone and is now in their 8 consecutive Premier League season.

As if one eight-goal deficit in London wasn’t enough for Wigan fans in a single season, Roberto Martinez’s side delivered another shocking defensive performance just six months later, this time in an 8-0 loss to Chelsea. Chelsea F.C. may know that a win on the final day of the 2009/10 Premier League season would secure the club’s first league title since 2006. On the final day of the season, Manchester United thrashed Stoke 4-0, but Chelsea’s 8-0 Wigan at Stamford Bridge couldn’t match it. Both Nicolas Anelka and Didier Drogba scored twice, as did Ashley Cole, Salomon Kalou, and Frank Lampard.

In addition to winning the trophy, Carlo Ancelotti’s men became the first team in English history to score seven or more goals four times in a league season. With a club record of 103 goals in the season, they also became the first Premier League team to score 100 or more goals in a season. Wigan F.C. finished the season with the league’s worst goal difference (minus-42). They were defeated by an eight-goal margin in London for the second time in 2009/10.

Chelsea couldn’t stop at one eight-nil win, so they had to do it again only two and a half years later. Aston Villa were the victims this time, with the Blues providing their fans with an early Christmas present to take home from Stamford Bridge. After a surprising 3-1 win at Anfield, Paul Lambert’s Aston Villa hoped to extend their six-game unbeaten streak at Stamford Bridge. Instead, the Villans suffered their most heinous Premier League defeat in history.

Fernando Torres had a fantastic month in December under his fellow Spaniard, scoring six goals in five competitive games. In this game, he was to start the route with a third-minute goal, followed by goals from David Luiz, Branislav Ivanovic, Frank Lampard, Oscar, Eden Hazard, and Ramires. With seven different Chelsea players scoring, the Blues set a new Premier League record for the most players on a single team scoring in a single match a record that could have been extended had Lucas Piazon converted a late penalty with his only shot in his only Premier League appearance.

This was (and still is) Aston Villa’s all-time club record defeat in a competitive match. They’ve only ever conceded eight goals once before, in an 8-1 loss to Blackburn Rovers in the 1888-89 FA Cup. Chelsea equaled their best-ever league victory with two 8-0 wins 959 days later they haven’t managed to replicate this since or in the 105 years before the first eight-goal win over Wigan Athletic in 2010.

Southampton thrashed Sunderland at St Mary’s Stadium on October 18, 2014. Sunderland’s Santiago Vergini’s spectacular volleyed own goal in the 12th minute set the tone for a comical defensive afternoon for the Black Cats, who would concede seven more times with three own goals in total. Sunderland equaled their Premier League record of three own goals in a single match, set in February 2003 against Charlton Athletic, with goals from Lidcutt and Patrick van Aanholt. Sunderland is the only club to have scored three own goals in a Premier League game twice. Every club requires an ethos. Sunderland’s fourth defeat by an eight-goal margin or more in English top-flight history, following thrashings at the hands of Sheffield Wednesday in 1911, West Ham in 1968, and Watford in 1982. Birmingham City, with five such defeats, is the only club to have lost more in this manner.

Southampton was third in the Premier League table after eight matchdays following this match, and despite showing how strong they were in attack on this Saturday afternoon, it was the mean defence with a league-low five goals conceded that served as the springboard. Saints scored 15% of their total goals in the 2014-15 Premier League season in this single game, but their mean defence held firm only 33 goals conceded all season, with only champions Chelsea F.C. conceding fewer (32), as Southampton F.C. finished a very respectable seventh.

Man City appears only once on this list, which may surprise some. In fact, for a long time, they were only able to get close to the list by losing to Middlesbrough 8-1 in May 2008. Regardless, that was back then, and this is now. Watford traveled to Manchester City in their sixth game of the 2019-20 season to face the reigning Premier League champions, but with their second manager of the season already in charge.

Manchester City led 5-0 after just 18 minutes, the fastest a Premier League team had ever led by 5 goals in a match. In comparison to an average of one goal conceded every three and a half minutes, Watford’s final 72 minutes were a success, conceding ‘only’ three more times. Man City recorded their biggest win in top-flight league history, while Watford suffered their heaviest ever defeat in English league football and only the third time they’ve conceded eight goals in a Football League game, following 8-1 defeats against Aberdare Athletic in January 1926 and Crystal Palace in September 1959.

Before October 2019, Leicester City had never won a Premier League match, with five defeats in those seven games. They’d played more games on that day of the week without winning than any other team in the competition’s history. They were about to put an exclamation point on that run. In Premier League history, only twice has a team had two hat-trick scorers in the same game. Robert Pires and Jermaine Pennant both scored trebles for Arsenal in a 6-1 win over Southampton in May 2003, and the Southampton F.C. suffered the same fate in a 9-0 loss to Leicester City in 2019. Leicester City led 5-0 at halftime, similar to Manchester City’s 8-0 win over Watford a month earlier. This was the 91st game of the 2019-20 Premier League season, and a team-leading 5-0 at halftime had already happened twice in the campaign.

Manchester United’s second appearance on this list, despite sandwiching the two thrashings mentioned here with a 7-0 win over Barnsley in 1997 and an 8-1 thrashing of Nottingham Forest in 1999. As if one 9-0 thrashing at the hands of Leicester City wasn’t enough for Southampton and Ralph Hasenhüttl, they were subjected to a repeat nightmare just 15 months later. Old Trafford saw its second 9-0 scoreline in Premier League history, but this time United was heavily aided by a red card to Alexandre Jankewitz just one minute and 22 seconds into the game. Southampton entered the game in 11th place and became the highest-placed team in the competition to suffering such a thrashing. Remember their midfielder James Ward-Prowse, who was the only player to play the entire two 9-0 losses just 15 months off from one another.

Q. What is the biggest win in premier league history?

On Thursday, Norway defeated Honduras 12-0 in the Under-20 FIFA World Cup, with Erling Braut Haaland scoring nine times. According to FIFA, the 12-goal victory is the largest in competition history.