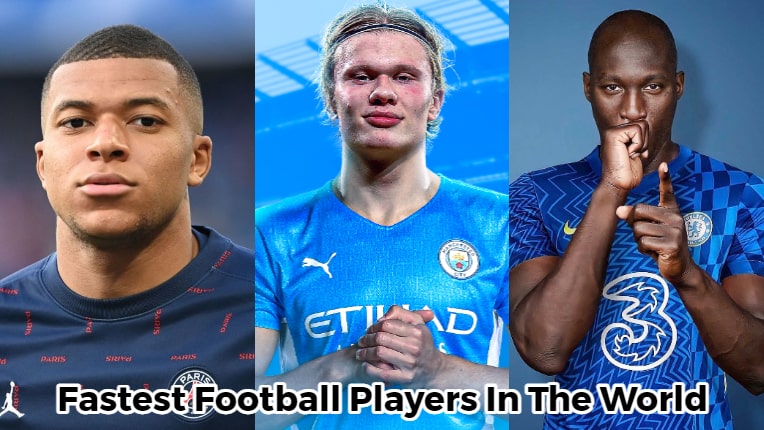 Football is a physically demanding sport in which players must run the fastest to win games for their clubs and nations. We’ve compiled a list of some of the world’s fastest players. Teams no longer build-up to a goal slowly because they always have that one player who can outrun the opposing defenders. This not only keeps them in shape but also helps them improve certain aspects of their game that will benefit them when it counts the most. Soccer is played fast nowadays, resulting in teams employing high-pressure tactics and relying on counterattacks to score. This is where fast players excel, as their speed, acceleration, and ability to move from one end of the pitch create more opportunities for their teams.

Why do soccer players run fast?

In soccer, defensive players must run faster to prevent offensive players from making plays past them. The simplest way for teams to score is to pass the ball through to wingers and strikers attempting to get past the backline. Defenders must be fast enough to catch up with them.

Footballers should concentrate on maximum speed and speed endurance these days. The game is made up of repeated 100% efforts, rather than the constant slow running seen in the past. Because the interchange bench has sped up the game, speed is by far the most crucial aspect of a team’s mobility. Here is a list of the world’s top 10 fastest football (soccer) players right now.

Top 10 Fastest Football Players In The World, According To Who Runs Fastest In Football

Kylian Mbappe of Paris Saint-Germain is the world’s fastest football player right now. In the 2019-20 Ligue 1 season, the French talisman reached a top speed of 38 kmph against his former team AS Monaco.

1. Kylian Mbappe Is The No 1 Fastest Football Player In The Soccer World Right Now– 38 kmph

French young superstar Kylian Mbapper is widely regarded as one of the fastest football players in the world right now, and he rightfully sits at the top of the list of the fastest football players in the world. Appreciation to his incredible speed and football brain, the wide forward is quickly becoming one of the best in the business. His goal for PSG against AS Monaco in a 2019-20 Ligue 1 match was a perfect example of this blend. Mbappe combined with Moussa Diaby to take the ball forward in PSG’s half while they were defending. What happened next was incredible, as the striker sped past Monaco players at 38 km/h to reach the opponents’ D-box before finishing the move with a goal with his left foot. Mbappe had a hat-trick in that game.

is mbappe faster than usain bolt?

KYLIAN MBAPPE set a speed of 38kmph against Monaco, which is faster than Usain Bolt’s 100m world record.

He’s incredible. Adama Traore of Spain is another outstanding athlete who has progressed to become one of the world’s fastest football players. He has speed, power, and strength, and he even oils his arms so you can’t grab him.” The Spain international only appeared in 10 Premier League games for Wolves in 2021-22, but he was able to show off his speed, reaching a top speed of 38 kmph. His insane bulk and speed, which he uses to easily outmuscle opponents, set him apart from the rest. Traore’s impact was felt heavily during Wolves’ UEFA Europa League match against Sevilla, where he ran past Sevilla defenders and into the penalty box before being brought down. Unfortunately for him, Wolves forward Raul Jimenez was unable to convert from the spot, and the team was eliminated from the quarterfinals.

Also, Read- The most skilled footballers in the world right now

Alphonso Davies is Bundesliga’s fastest player ever. Bayern Munich’s versatile winger has been clocked sprinting at 36.51 kmph (22.7 mph), earning him the nickname “The Road Runner” from teammate Thomas Muller. Alfonso Davies of Bayern Munich is another fastest player in the world right now, ranking on the list of the top ten fastest football players. Davies, regarded as the Bundesliga’s fastest player, demonstrated his speed while tracking back during Bayern Munich’s match against Arminia on a snowy evening. Davies, an inverted full-back who relies heavily on his speed to cover the left-wing, ran back at a speed of 36.51 kmph to clear the ball.

Diogo Dalot finished first with a speed of 36.43km/h, followed by Lukaku at 36.25km/h. Tahith Chong, Rashford, and James rounded out the top five. Luke Shaw was the slowest player on the list, clocking in at 31.03km/h, slower than Nemanja Matic, Juan Mata, and Scott McTominay.

Romelu Lukaku, who played for Manchester United under Jose Mourinho in 2019, leaked the speed test results of all Manchester United players. The bulky Belgian led with a top speed of 36.25 kmph, followed by Daniel James at 35.35 kmph and Luke Shaw at 31.03 kmph. Lukaku inside the box has always been used as a target man, winning headers from set-pieces and long balls. However, the centre-forward has shown flashes of his speed on occasion, most notably during the 2019 FIFA World Cup. Since his departure, Manchester United has frequently relied on quick wide players like Mason Greenwood, Marcus Rashford, Jadon Sancho, and others to get the job done.

Also, read- The central midfielder, the centre-back, and the goalkeeper are the most important positions in soccer

Incredibly, the 6ft 4inch star can run so fast while maintaining his composure in front of the goal. Haaland’s top speed was 36 kmph during Borussia Dortmund’s 3-2 Bundesliga victory over VfB Stuttgart. one of the fastest strikers in the game’s history The Borussia Dortmund goal machine is incredibly fast for a player his size, and he is seldom given the ball away while charging towards goal.

Who is the fastest between Mbappe and Haaland?

Looking deeper into the numbers, Mbappe outpaces Haaland in terms of pace (97-89), making him the fastest player in the game ahead of Adama Traore (96). The Norwegian striker wins the shooting competition (91-88) and also wins the defending competition (45-36).

Erling Haaland has arrived in the United Kingdom to complete his £51.2 million transfer to Premier League champions Manchester City. This month (May 2022), City announced an agreement with the Norwegian forward to join them from Borussia Dortmund.

We hope you enjoyed our article on the list of the most important positions in soccer. Please drop your opinions in the comment box. The information for this article is acquired from Wikipedia. Since this topic is subject to change, our website provides no guarantee for the accuracy of the information.