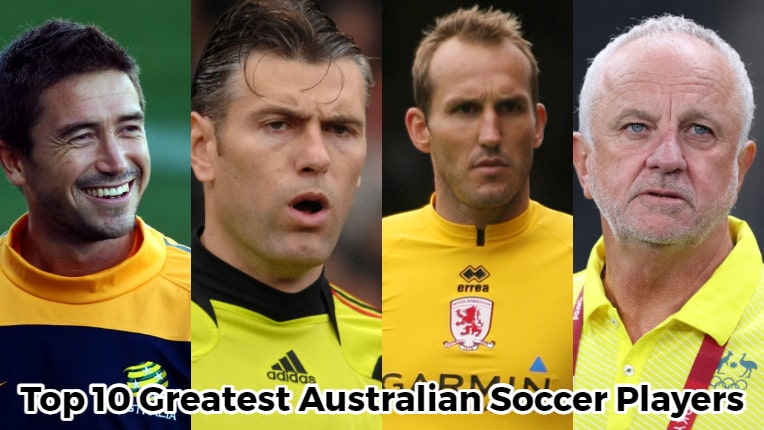 While it can be difficult to see Harry Kewell’s career beyond the slew of injuries and setbacks, the Melbourne Heart man has been a fantastic talent and arguably the best player Australia has ever produced. Here’s a list of the 10 greatest Australian soccer players.

Harry Kewell was born on September 22, 1978. He is a former player and coach in Australian association football. He most recently served as the head coach of Barnet. Kewell has played for Leeds United, Liverpool, Galatasaray, Melbourne Victory, Al-Gharafa, and Melbourne Heart, among others. He was named PFA Young Player of the Year in 2000 while at Leeds. While playing for the Australian national team, he received 58 caps and scored 17 goals.

Despite his injury-plagued career as a left-winger who can also play as an attacking midfielder or second striker, he is widely regarded as “Australia’s finest football export.” In 2012, Kewell was voted Australia’s greatest footballer by fans, players, and the media. Kewell’s goal against Croatia advanced Australia to the knockout stages of the 2006 FIFA World Cup, the team’s second World Cup appearance.

He is a member of the Australian Professional Footballers’ Association’s Executive Committee. Kewell also has a British passport as a result of his father’s ancestry. Robbie Mustoe, a former Middlesbrough midfielder turned pundit, praised Kewell as one of the best players he had ever faced, but questioned his consistency and attitude after his initial injuries. Michael Ballack, a former German international, has also emphasized Kewell’s ability and inconsistency.

Zeljko Kalac born on 16 December 1972. He is a former Australian soccer goalkeeper who currently manages NK Urania Baka Voda of Croatia’s third division. Kalac, nicknamed “Spider” because of his tall, gangly stature, is the tallest player to have represented Australia’s national football team, standing at 2.02 m. When not wearing the traditional number one, Kalac’s preferred playing number is 18 and he has generally worn this number when representing Australia. However, when he joined A.C. Milan in 2005, the number 18 was taken by Marek Jankulovski, who had also joined at the time, so he chose the number 16. Number 18 was already taken when he transferred to Kavala, so he settled for number 60.

Mark Schwarzer was born on October 6, 1972. He is a former professional association football goalkeeper from Australia. From 1993 to 2013, he represented Australia at the international level. Later he got selected for both the 2006 and 2010 FIFA World Cups. He is one of the greatest goalkeepers in Premier League history. Schwarzer made his professional debut in 1990 for Marconi Stallions after progressing through the youth ranks of Colo Cougars, Penrith, Blacktown Association, and Marconi Stallions.

Mark Schwarzer was the first and only non-British player to appear in more than 500 Premier League games. That makes him the most appearing non-British in Premier League history. Also, he is the oldest player to play in the UEFA Champions League knockout stages. He joined Leicester City on a free transfer in January 2015 and left at the end of their Premier League-winning season in 2015–16.

Schwarzer made his full international debut in a World Cup qualifying match against Canada in 1993 as a substitute after Robert Zabica was sent off in the 17th minute. He had previously played for Australia at the under-17 and under-20 levels. He won 109 caps for his country throughout his international career. In January 2011, he surpassed Alex Tobin’s appearance record to become Australia’s most capped player.

Graham James Arnold is a former player and manager in Australian association football. Arnold joined the Australian national football team as an assistant coach in 2000. After head coach Frank Farina was sacked in 2005, Arnold worked with Guus Hiddink for the 2006 FIFA World Cup campaign, in which they made the second round of the finals.

Following Hiddink’s departure, he was named interim coach of the Socceroos. Arnold went on to qualify Australia’s U23 men’s national football team (the ‘Olyroos’) for the 2008 Olympics in Beijing. Arnold went on to help Pim Verbeek qualify for the 2010 World Cup in South Africa. Between 2010 and 2013, Arnold was the manager of the Central Coast Mariners in the A-League, where he led the club to a Premiership and a Championship. He has been inducted into the Football Federation Australia Football Hall of Fame.

Aurelio Vidmar is a former player and football coach. He is a greatest Australian soccer players who was the team captain and former coach of the Australia U23 national team. He is now the manager of Bangkok United, a Thai League 1 club. The Vidmar End at Hindmarsh Stadium is named in honor of his decorated national team career and his service to Adelaide United. Tony Vidmar, his brother, is also a former footballer.

Timothy Cahill is a former Australian greatest footballer who mostly played as an attacking midfielder but also as a striker on occasion. Cahill, a box-to-box midfielder, rose to prominence for “his aggressive and powerful approach and his ability to head the ball in the penalty area.” Cahill is regarded as one of the greatest Australian footballers of all time, having scored 50 goals in 108 caps between 2004 and 2018. He is currently a BBC Sport and Sky Sports pundit. Cahill moved to England to play professionally in 1997. He was signed by Millwall on a free transfer from Sydney United.

He was a key member of Millwall’s Football League Second Division title-winning squad in the 2000–01 season, as well as their run to the 2004 FA Cup Final. Cahill was transferred to Everton at the start of the 2004–05 season. In his debut season, he was named both Everton Player of the Season and Everton Players’ Player of the Season, and the following year, he was named as one of 50 nominees for the Ballon d’Or, becoming the first Everton player to be nominated in 18 years.

He was also a member of Everton’s FA Cup-winning squad in 2008–09. Cahill has played for the New York Red Bulls, Shanghai Shenhua, Hangzhou Greentown, and Melbourne City since leaving Everton in 2012. He finished his career at Jamshedpur after a brief stint at former club Millwall. Cahill was the first Australian to score in a FIFA World Cup, appearing in three World Cups (2006, 2010, and 2014), and has the most World Cup goals of any Australian, with five. He became the first Australian player to score in an AFC Asian Cup in 2007. He is well-known for his consistent goal celebration of shadow boxing around the corner flag.

He is a retired Croatian footballer and the current manager of Croatia’s national under-19 team. Simunic began his career with the Melbourne Knights before moving to Germany, where he spent 14 seasons in the Bundesliga with Hamburger SV, Hertha BSC, and TSG 1899 Hoffenheim before finishing his career with Dinamo Zagreb. He represented Croatia from 2001 to 2013, appearing in five major tournaments – the 2002 and 2006 World Cups, as well as 2004, 2008, and 2012 European Championships – and is the fifth most capped player in Croatian history.

Mark Viduka is the eighth greatest Australian soccer players. He is a retired Australian soccer player who played as a centre-forward. He captained Australia to the Round of 16 at the 2006 FIFA World Cup, their best performance to that point. His four UEFA Champions League goals are the most by an Australian player. There’s a sense that Viduka didn’t make the most of his opportunities. He left international service at the age of 31 and retired completely at the age of 33 due to a slew of injuries. At his best, he was a beautifully instinctive player with infinite time on the ball, Australia’s most complete player.

He was born to Greek parents in Melbourne, Australia. Avraam Papadopoulos is Australia’s ninth most famous soccer player. He is a Greek professional footballer who plays as a centre-back for Olympiacos in the Super League. He began his career as either a striker or an attacking midfielder. Between 2003 and 2006, Aris experienced some of the darkest days of their history in Greek football, tangled with a defensive philosophy of football, financial problems at the club, and gradual “demotions” into more defensive positions by his coaches. He progressed from defensive midfielder to right back, then to central defender, where he currently plays.

For many years, he stood linked to Athenian giants by the media/usually the sports newspapers. He had never changed clubs by then. As stories circulated during the season (2006/07), he existed being closely monitored by scouts from larger clubs such as Benfica and Chelsea, as well as Zenit of Russia. He was considered one of Aris’ top stars in his final season in Thessaloniki. Later he moved to Piraeus, alongside Sergio Koke, Ronald Nacho Garcia, and experienced ex-super star and big Marcio Amoroso.

Matthew Bingley is the greatest soccer player in Australia. He is a utility player who can play in midfield or defence and has played over 300 matches at the highest level of Australian domestic football in nearly 20 years. Bingley also played 14 times for Australia’s national team, scoring five goals. Bingley began his football career with Granville. He was drafted by state league side Melita Eagles as a junior. At the age of 15, he played one match for the Eagles in the New South Wales Division 1 competition. Later he was signed to National Soccer League club St. George for 1987. Despite not playing for the Saints in 1987, Bingley made his AFL debut in round 16 of 1988, in a 1–1 draw with the Melbourne Knights.