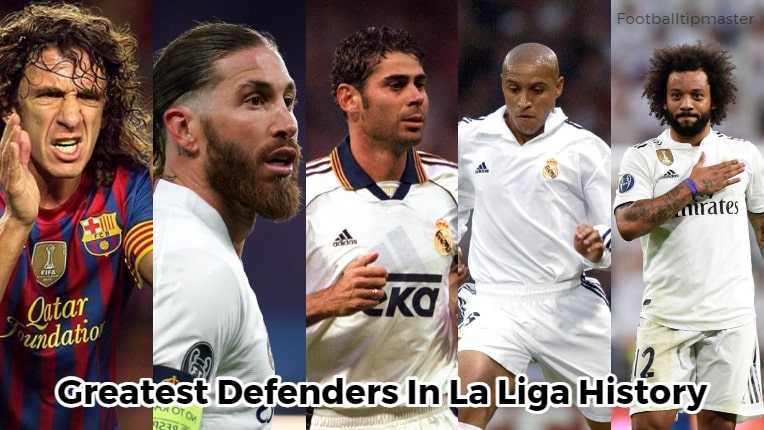 La Liga is one of the greatest professional football leagues in the world, and we will present a list of the best La Liga defenders of all time in this article. In addition, La Liga has produced some of the game’s best defenders. Defenders are the game’s unsung heroes, despite playing the least glamorous position on the field. The contributions of the rearguard can easily slip under the radar in a world that is becoming increasingly obsessed with numbers. Many great defenders with exceptional defending technique and skills have appeared in La Liga. The majority of these defenders have previously played for Barcelona, Real Madrid, and Atletico Madrid. This article will tell you about the best La Liga defenders of all time.

However, one thing that all of history’s dominant teams have in common is a strong defensive unit. To be able to express themselves fully, midfielders and forwards require a dependable set of defenders at the back. If the team is leaking goals in the back, it can not only make their jobs more difficult, but it can also undermine their confidence.

La Liga is known for having some of the world’s most technically gifted players. The expansive nature of the Spanish game called La Liga has compelled its defenders to broaden their game. As a result, brute strength and perseverance began to be supplemented by ball control and good passing range. This makes it difficult to select the all-time best/greatest defenders in La Liga, and unfortunately, we cannot name all the legendary players out there in this short article. However, in the following section, we will provide a brief overview of the personal and professional characteristics of the best La Liga defenders of all time in our opinion.

La Liga Defenders With Most Goals | Which Defender Has Scored The Most Goals In La Liga?

Ronald Koeman is a Dutch professional national football team manager and former player who was most recently the manager of La Liga club FC Barcelona. Ronaldo Koeman is the all-time leading goalscorer in club football with 239 goals.

Who is the best defender in La Liga? | Who Won The Most Best Defender Awards In La Liga?

List Of 5 Greatest Defenders In La Liga Ever | Latest Updates

Carles Puyol Saforcada, who was born on April 13, 1978 in La Pobla de Segur, Spain, is among the best defenders in La Liga. He was Barcelona’s captain from August 2004 until his retirement in 2014, and he appeared in 593 competitive matches for the FCB club. Puyol is considered one of the best defenders of his generation. Although he was primarily a central defender, he was a versatile player who had experience playing on both sides, primarily as a right-back, defensive midfielder, and even as a goalkeeper and striker.

He won 18 major club titles, including six La Liga titles and three Champions Leagues. Carles Puyol earned 100 caps for Spain and was a member of the squads that won Euro 2008 and the 2010 World Cup. Individually, he was named “Golden Foot” as a football legend in 2016 after being a member of the ESM Team of the Year (4), UEFA Team of the Year (6), FIFA World Cup Dream Team (1), and UEFA Euro All-time XI (published in 2016).

Sergio Ramos was born in Camas, Spain on March 30, 1986. He is a Spanish footballer who currently plays for Ligue 1 club Paris Saint-Germain (PSG) as well as the Spain national team. He is a strong tackler with excellent aerial ability. He’s also very good at reading the game and making interceptions. Aside from that, Ramos is an excellent passer of the ball. To put it simply, he is the whole package. He was a centre-back for Real Madrid for 16 years, and he captained the club for six of those years. He is widely regarded as one of history’s greatest defenders.

Defenders have a more complicated world than strikers and midfielders because their dominance is not determined by goals or assists. Many people consider Sergio Ramos to be the greatest defender of all time. According to France Football Magazine, 68% of people voted for Sergio Ramos to be the greatest of all time. Sergio Ramos is the most capped player in Spanish national team history, as well as the country’s eighth-highest all-time goalscorer. He also holds the record for the most international victories for Spain, with 131 victories in his career.

Sergio Ramos has won five La Liga titles, two Copa del Reys, four Supercopa de Espana, four UEFA Champions Leagues, three UEFA Super Cups, and four FIFA Club World Cups with Real Madrid, as well as the FIFA World Cup in 2010 and the UEFA European Championship in 2008 and 2012. Individually, Sergio Ramos has been named La Liga Best Defender (5) and UEFA Defender of the Season twice. He has won one FIFA Club World Cup Golden Ball award after being a member of the UEFA Team of the Year eight times, the FIFA World Cup Dream Team once, the ESM Team of the Year four times, the UEFA Euro Team of the Tournament once, and the FIFA Confederations Cup Dream Team once.

The third player on the list of the best La Liga defenders of all time is Fernando Hierro, born March 23, 1968, in Velez-Malaga, Spain, is a Spanish football team manager and former player who has played as a centre-back, sweeper, or defensive midfielder in his career. He began as a midfielder and progressed to become one of the best defenders in Real Madrid and Spanish football history. He was very dependable in the air, with great anticipation and positioning, and he stood out for the power with which he could strike the ball, which was crucial to his 127 goals. Fernando Hierro scored 127 goals in 601 games between 1989 and 2003, including 89 matches for the Spanish national team.

Roberto Carlos was born on 10 April 1973 in Garca, State of So Paulo, Brazil, and joined Real Madrid at the age of 23. Carlos won numerous major trophies during his eleven years with Real Madrid. For his powerful flexion and free kicks, he was nicknamed El Hombre Bala (“The Bullet Man”), and he has been described as “the most attacking left-back in the history of the game.”

Carlos (“The Bullet Man”) was known throughout his career for his powerful bending shots and free kicks, which reached speeds of over 105 miles per hour (169 km/h). Roberto Carlos’ goal defied physics and continues to astound scientists today. When the famous free-kick occurred, physicists all over the world were perplexed by the images. Who was the inventor of the banana free kick? The Brazilian, Roberto Carlos, has just nailed it. Roberto Carlos hit an “impossible” banana free kick in 1997 that is still talked about today. Roberto Carlos won four La Liga titles, three UEFA Champions League titles, and three Supercopa de Espana. Mr. Roberto Carlos Inducted into the Brazilian Football Museum Hall of Fame, Roberto Carlos has won the Bola de Prata award three times, the Ballon d’Or in 2002 (runner-up), and the Golden Foot award in 2008.

Marcelo Vieira was born on May 12, 1988, in Rio de Janeiro, Rio de Janeiro State, Brazil. He is best known for his attacking skills, fine technical technique, shooting abilities, speed, agility, and ball control. He is a versatile player who can play as a full-back, a left-winger, or even a midfielder. Marcelo is the captain of the Spanish club Real Madrid and a Brazilian footballer who plays as a left-back. His explosive speed, energy, and deft movement make him an excellent counter-attacker, and he effectively acts as an extra attacker during the counter-attack.

Marcelo The captain has four Champions Leagues, four Club World Cups, three European Super Cups, five Spanish LaLiga titles, two Copa del Reys, and five Spanish Super Cups to his name. Marcelo continues to make history with Real Madrid. He was a member of the Brazilian national team that won an Olympic bronze medal in 2008 and an Olympic silver medal in 2012. Marcelo made his debut for Brazil in 2006, and while winning 23 trophies is an incredible career haul by any measure, Marcelo is still a long way behind the most-ornate players in the history of some of Europe’s other top clubs.

Who is the greatest defender in La Liga 2021?

Eder Militao, a Brazilian international, teamed up with Nacho and did an admirable job at the heart of Real Madrid’s defence. Militao is a strong tackler and a quick defender. He can keep up with the league’s fastest attackers and is a force in aerial duels.

Who is the best defender in Real Madrid?

Sergio Ramos tops the list of the greatest Real Madrid defenders of all time.

Gerard Pique is currently Barcelona’s best defender, with a total of 124 pass interceptions. With this outstanding performance, he ranks 33rd among the top 5 European league defensive players and fourth in the La Liga overall ranking.

Who has scored the most goals in La Liga? | Who is La Liga’s highest goal scorer of all time?

We hope you enjoyed our article on who are the greatest defenders in La Liga. Please drop your thoughts in the comment box. The information for this article is acquired from Wikipedia. Since this topic is subject to change, our website (www.footballtipmaster.com) provides no guarantee for the accuracy of the information.