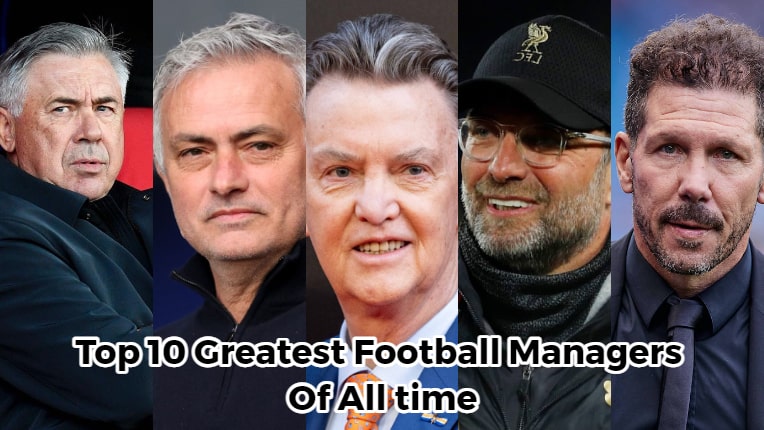 This article is about the top ten greatest football managers of all time. Football is the only sport in which managers are as popular as players. This has never happened in any other sport around the world. Managing a football club is not for the faint of heart. Managing a soccer team is a difficult task because it necessitates a wide range of talents and extensive knowledge of the game. However, while they must be tactically astute, they must also work individually with the players to motivate and discipline them. The question is, who are the greatest football managers of all time as of 2022?

To begin, these coaches ensure that they have earned the players’ complete trust and respect before competently leading them. The best football coaches of all time are listed below, ranked according to various statistics from their coaching careers.

Top 10 greatest football managers of all time as of 2022

Who are the greatest football managers in history? Check out the list below for more information, including specifics about the football teams they coach.

Before joining the Ukrainian Premier League club Dynamo Kyiv, Mircea Lucescu managed several teams. From 2004 to 2016, he was the manager of Shakhtar Donetsk, where he led the Ukrainian club to every domestic trophy and the 2009 UEFA Cup. He began his coaching career in 1979 and has worked with clubs such as Inter, Galatasaray, and Besiktas, as well as the Romanian and Turkish national teams. With 36 trophies, Lucescu is the world’s second-most decorated manager, trailing only Sir Alex Ferguson’s 49 and still five ahead of Pep Guardiola. He has won 12 league titles and 9 domestic cups in Romania, Ukraine, and Turkey since his debut. In 2020, he was named manager of Dynamo Kyiv. He is now regarded as one of the world’s greatest football managers of all time.

He was the longest-serving and most successful manager in Arsenal history, serving from 1996 to 2018. His contributions to English football, including changes to scouting, player training, and diet regimens, revitalized Arsenal and aided the sport’s globalization in the twenty-first century. Arsenal has qualified for Europe’s most prestigious competition every year since Arsene Wenger took over as manager. Arsenal has won the Premier League three times under his management, including two seasons in which they won both the FA Cup and the Premier League. He is best known for keeping Arsenal in the English Premier League’s top group, winning three league titles, seven FA Cups, and reaching the Champions League final in 2006. He also won the title league and the domestic cup with Monaco. It’s no surprise that he’s regarded as one of the greatest English football managers of all time.

Pep Guardiola was a defensive midfielder for Barcelona’s soccer club before being promoted to manager. Since his appointment, he has won three La Liga titles, three Super Cups, two domestic Cups, two Champions Leagues, two European Super Cups, and two World Cups. Guardiola was awarded the Catalan Parliament’s Gold Medal in 2011, after leading the club to another La Liga and Champions League double. He was also named FIFA World Coach of the Year the same year. He finished his four-year stint at Barcelona with 14 awards, a club record. Later that year, he took over as manager of Manchester City, and after a season without a trophy, he won the Premier League. With all of these accomplishments, Pep’s inclusion on the list of the world’s greatest football managers of all time should come as no surprise.

During the 2006 World Cup matches, Marcello Lippi led the Italian team to victory. He is best known for being the driving force behind Juventus‘ dominance of Italian football in the 1990s. He has won five league titles, one domestic cup, and the 1996 Champions League with Juventus since his debut. Even though Lippi is nearing retirement, he has recently managed the Chinese National Football Team. During his illustrious career, Marcello Lippi, the grandfather of modern Italian football, won a World Cup, a Champions League, and five Serie A titles. Few managers can lay claim to having conquered European club football while also overseeing world dominance with their country.

Conte began his career as a midfielder for local club Lecce and went on to become one of Juventus’ most decorated and influential players. He captained the team and helped them win the UEFA Champions League, as well as five Serie A titles. Antonio Conte is an excellent manager who led Inter to their first Scudetto in 11 years, effectively ending Juventus’ years of dominance. Conte is someone who expects his players to respect him. He understands how to manage his team on the field, how to train his team, and how to get the most out of his players.

Antonio Conte played for Juventus and represented the club more than 20 times before taking over as manager. He led Juventus to the Series A title without losing a single game in 2011/12. He was with Juventus for three years before taking over as manager of Italy for their Euro 2016 campaign. Antonio Conte joined Chelsea in 2016 and won the Premier League in his first season, setting a new record of 30 league victories. He also won the 2018 FA Cup before joining Inter Milan in 2019, where he won the 2021 Serie A title but left soon after. He recently took over as head coach of Tottenham Hotspur.

5. Diego Simeone- The greatest football manager of all time

Diego won two league titles in Argentina before taking over as manager of Atletico Madrid. Following his appointment at Atletico Madrid, he led the club to victory in the 2012 Europa League. During this time, his team defeated Chelsea in the European Super Cup before winning the 2013 Spanish domestic cup. While some individual players may prefer easier rides elsewhere, Simeone is an inspirational manager who has overseen Atletico’s most successful period and helped some lesser lights overachieve, competing with the best players in the world at Barcelona and Real Madrid over the past decade. Diego’s European success was limited by narrow defeats to Real Madrid in the Champions League finals in 2014 and 2016. In 2018, he won the European League and the UEFA Super Cup.

Simeone embarked on this new adventure, his family as excited as he was. The Argentine has broken numerous records on his way to winning eight trophies as a coach, including two LaLiga Santander championships, two Europa League titles, two UEFA Super Cups, one Copa del Rey, and one Spanish Super Cup.

4. Jurgen Klopp – One of the greatest managers in the world

Jurgen Norbert Klopp was born on the 16th of June, 1967. He is the manager of Premier League club Liverpool and a former player from Germany. He is widely regarded as one of the world’s best managers of all time. Klopp played for Mainz 05 for the majority of his career. During Klopp’s early career, he transformed Borussia Dortmund’s fortunes, bringing them league titles in 2011 and 2012, as well as the German Cup in 2012. His reign ended Bayern Munich’s unrivaled dominance and resurrected Dortmund as a major force in European football.

Van Gaal went on to have a successful career. He led an overage Dutch national team to third place at the 2018 FIFA World Cup in Brazil in 2014. He is also the last coach at Manchester United with a clear vision. Louis won the 1995 Champions League, the 1992 UEFA Cup, three league titles, and one domestic cup with Ajax. He has managed Ajax, Barcelona, AZ Alkmaar, Bayern Munich, and Manchester United at the club level, as well as the Netherlands national team three times.

Louis Van Gaal is one of the most decorated managers in world football, having won 20 major awards during his tenure. He added more victories, three more league titles, and a domestic cup with Bayern Munich and Barcelona. He later took over as manager of Manchester United before being fired. However, Van Gaal returned to management in 2019 when he was appointed as the Netherlands’ head coach for the third time.

Jose Mourinho, the Portuguese coach, is known for the well-organized defences of his team. With Chelsea, Porto, Inter, and Real Madrid, Mourinho has won eight league titles and four domestic cups. Mourinho is known for his animated bench presence, especially when his team scores. His most famous celebration is probably the knee slide, which he performed expertly after Madrid’s dramatic 3-2 Champions League win over Manchester City. He also won the UEFA Cup and the Champions League with Porto in 2003 and 2004, the 2010 Champions League with Inter, and the 2017 Europa League with Manchester United. He is now regarded as one of the greatest football managers of all time.

Carlo Ancelotti became the only active manager to have won the Champions League three times when Real Madrid won it in 2014. Ancelotti is one of only three managers to have won the UEFA Champions League three times (twice with AC Milan and once with Real Madrid), as well as the first and only manager to have managed teams in five finals. He has twice won the FIFA Club World Cup as manager of Milan and Real Madrid. Carlo Ancelotti had won it twice previously with Milan, in 2003 and 2007. He is now regarded as one of the greatest football managers of all time.

The coach is only second in command after the manager. This role is frequently assigned to personnel who are older and more experienced than the players. Here is a list of the top five greatest football coaches of all time.

Who is the oldest football manager in the world?

Roy Hodgson is the oldest football manager in the world. He ended his 45-year managerial career as Crystal Palace’s manager during their Premier League trip to Anfield to face Liverpool.

Who are the top five players who went on to become managers?

Being chosen to lead a particular group is more of a responsibility than a privilege. In the soccer world, for example, where competition is fierce, being named one of the best football managers of all time is not an easy task. Still, taking any given team to the next level is determined by one’s abilities and strategies.

We hope you enjoyed our article on the top ten greatest football managers of all time. Please leave your thoughts in the comment section. This article’s information was derived from Wikipedia. Our website makes no guarantees about the accuracy of the information because it is subject to change.