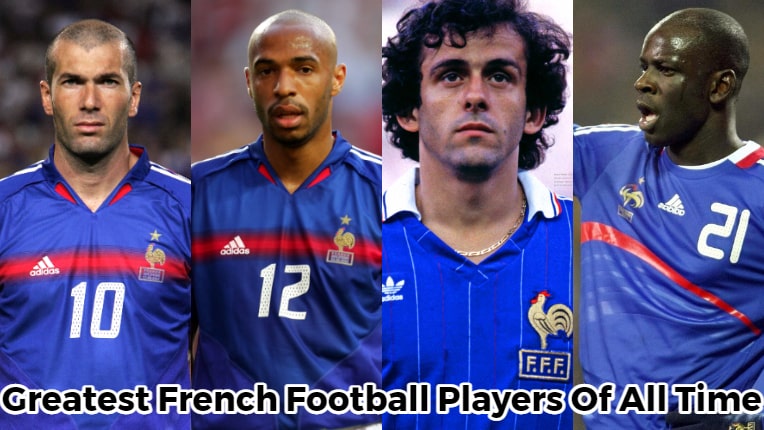 The greatest French football players of all time, In France, association football is the most popular sport. France has produced many top footballers over the last few decades, but the greatest are all considered legends. The French Football Federation (FFF, Federation Francaise de Football) is the country’s governing body, in charge of all aspects of association football, both professional and amateur. Currently, Paris Saint-Germain. PSG is currently France’s most successful team, having won over 40 official trophies in major competitions. In this article, we have listed some of the greatest football players who have represented France at the national and club levels.

Zinedine Zidane is regarded as the greatest French player of all time. Zinedine Zidane is a French footballer who led his country to World Cup and European Championship victories in 1998 and 2000. He later became a successful manager.

Zinedine Zidane may not have scored as many goals as others. Others may have won more trophies, but not by much. But no one personified French football more than Zinedine Zidane. Nobody captured the imagination like him as a player and as a manager. Great players don’t always make great managers. Zinedine Zidane has done a better job than most at replicating his on-field success in the dugout. Many people are reluctant to give the Frenchman the credit he deserves for this. Many believe Zidane still has a lot to prove as a manager.

Remarkable performances for Juventus, who reached the Champions League finals in 1997 and 1998. He brought Zizou to prominence, but it was against Brazil at the Stade de France that he truly established himself as the man for the big occasion. He then went on to become the most expensive player in history. Then he toyed with defenders in Euro 2000 for another international trophy before inspiring Real Madrid to win the 2002 Champions League with that goal.

Zidane was a playmaker comprehended for his elegance, vision, passing, ball control, and technique. He is one of the greatest football players of all time. As a player, he received numerous individual honors, including FIFA World Player of the Year in 1998, 2000, and 2003 and the 1998 Ballon d’Or. His 2006 World Cup performance was another masterclass, as he dominated Brazil and held Italy in his hands, a penalty in the final. He went out with a bang, as was his legend. Zidane, the man for the big game, has perhaps brought more joy to French football than anyone else and few will ever match his legacy, in France or elsewhere.

Thierry Henry will be remembered for the 1998 World Cup final, where he set to come on as a substitute before Desailly was sent off. Only 20 years old when the tournament arrived in his home country, the three-time capped Monaco winger ended up impressing his country in 1998 – he led the scoring for Les Bleus – but football had not seen anything yet.

Thierry Henry is without a doubt the best striker to ever play in the Premier League. Jamie Carragher, Sky Sports’ Monday Night Football pundit, was upbeat when he spoke with The Sportsman. When it comes to the greatest Premier League forward of all time, there is simply no debate for him. “He is a wizard with his feet and has a gift for scoring goals. Henry’s French national team teammate Lillian Thuram once remarked, according to the Telegraph. “His best quality is his speed while the ball is at his feet.” He might be the fastest man to put on a football boot.

In the years that followed, Henry grew into a colossus. He was Arsenal’s top scorer for four Premier League seasons. Also, he carried the club to an unbeaten title and set an assist record that has yet to be broken. At Barcelona, he switched back to the left-wing, won a treble, and set the all-time scoring record for his country with 51 goals. Even these headlines, however, do not convey his brilliance. He was more powerful than any striker on the planet, yet he had the grace of a few strikers. He existed lightning-fast and creative, drifting aimlessly but consistently being where he was needed. There’s a reason why almost every defender who has faced him considers him to be their greatest adversary. He was ferociously prolific as well as hugely entertaining.

Michel Platini was simply one of the greatest football players of all time. He is quick, elegant, and possesses a passing range that would make Paul Pogba weep. Le Roi was also prolific in front of goal, leading Italian football in scoring at a time when defences were as mean as Cantona quips – and despite his lack of athletic ability, Platini could slalom through opposition players like traffic cones.

And the entire world adored him. He was Saint-brain Etienne’s before Serie A called; he was a European Cup runner-up in 1983, lit up Euro 1984 as France swept all before them, and then finally won the European Cup with Juventus in 1985 and he capped each year with a Ballon d’Or. Platini was magnificent: he is without a doubt the most talented Frenchman who has ever won a World Cup.

Lilian Thuram is France’s most-capped player of all time. He was part of the solid foundation upon which France’s successfully built. Thuram made his senior international debut in August 1994. During his fifth season as a professional with French giant AS Monaco. Lilian Thuram’s longevity was one of his greatest assets. That is evidenced by his record of 16 appearances in European Championship matches. Thuram is a most decorated player.

He also ruled supreme at the club level. He was a key member of the legendary Parma team of the late 1990s. Before moving on to Juventus and then Barcelona. Despite this glittering career, he only won two domestic titles. He never won the Champions League, retiring in 2008 when Pep Guardiola was appointed manager of Barcelona. Thuram remains one of the most admired footballers of a legendary generation.

Patrick Vieira is a former player and manager in French football. He is the manager of Crystal Palace, a Premier League club. He is widely regarded as one of the most talented midfielders of his generation. Vieira earned 107 caps for France and scored six goals during his career. The Times ranked Vieira 33rd among the 50 hardest soccer players in history in 2007. He appeared on the cover of the FIFA 2005 Magazine. In 2014, FIFA named him an Ultimate Team Legend.

In his prime, Arsenal had won the World Cup the day after France had defeated Brazil 3-0 on home soil in the 1998 final, thanks to Emmanuel Petit’s goal and Patrick Vieira’s all-action midfield display. A clipping is still framed in the Arsenal press room. He later joined Juventus, Inter Milan, and Manchester City. Patrick Vieira is now a manager at Nice and will be remembered as a football legend by Arsenal fans.

Patrick Vieira was, indeed, on top of the world. At his peak, there may not have been a more complete midfielder than him. He would win every ball in the centre of the field, could drive forward with speed and strength, and had the excellent passing ability. He was not only box-to-box but also touchline-to-touchline: it was as if he had two or three extra players. Every player he played with benefited from having someone like him next to them. He was a cheat code of a footballer for club and country, winning three titles with Arsenal and serving as the beating heart of his country for nearly a decade. He’d get into any midfield in French football history and run with it.

Eric Cantona is a footballer from France. He was one of the sport’s biggest stars in the 1990s, best known for his pivotal role in resurrecting English powerhouse Manchester United and for his volatile play. One of the most infamous incidents in Premier League history occurred on this day in 1995. After being sent off, Manchester United legend Eric Cantona kicked Crystal Palace fan Matthew Simmonds in the middle of a match. The FA subsequently banned him for nine months. After this incident, he never regained his position, which was taken by Zinedine Zidane. As a result, he may have suffered in the pantheon of French footballing icons. Eric Cantona went on record as supporting England at Euro 2004 and the 2006 World Cup, possibly reflecting his struggles in international football.

However, there is no denying the former Manchester United talisman’s brilliance and genius, who not only transformed Old Trafford but also English football with his presence. Cantona may not have received a fair shake for France, but he remains one of the greatest French football players of all time.

Didier Deschamps is a legendary French football manager and ex-player. Deschamps made headlines in July 2018 after becoming the world’s third person to win the FIFA World Cup as both a player and manager. The former French international was regarded as one of his generation’s best defensive midfielders. Deschamps has played for a number of European top clubs, including Marseille, Juventus, Chelsea, and Valencia.

After victories in 1998 and 2018, he is one of only two men to have won the FIFA World Cup as both captain and coach. Deschamps won three Serie A titles, two Ligue 1 titles, and two UEFA Champions Leagues during his playing career. He won the 1998 FIFA World Cup and the 2000 Euro as a member of France’s golden generation. He was named coach of the French national team in 2012, and he won the FIFA World Cup for the second time.

During his second stint with Marseille, Deschamps won his first professional honors, winning two French league titles in 1991 and 1992, and was a member of the first and only French team to win the Champions League in 1993, becoming the youngest captain ever to do so.

We hope you enjoyed our article on the list of who are the greatest French football players of all time. Please drop your opinions in the comment box. The information for the greatest French football players of the all-time article is acquired from Wikipedia. Since this topic is subject to change, our website provides no guarantee for the accuracy of the information.