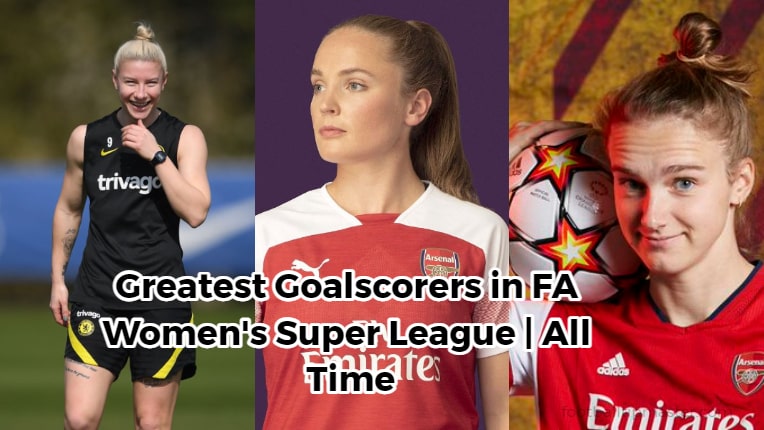 1. Bethany England (One Of The Greatest Goal Scorers In FA Women’s Super League)

Awards and performances of Bethany

She was even victorious in the 2017 FA WSL Spring Series. Beth won two FA WSL titles in the FA Women’s League Cup in 2020, the FA Women’s Community Shield, and the Women’s FA Cup along with the club, Chelsea.

Furthermore, England has been one of the greatest FA WSL performers in the recent two years. Indeed, Beth was got the title of the FA WSL Player of the Year in 2020, the PFA’s WSL Team of the Year for the 2020 period. Also, she was named to the list of the PFA Women’s Players’ Player of the year for 2019-20. Indeed, Bethany played a significant role in Chelsea’s win of these awards.

2. Vivianne Miedema (One Of The Greatest Goal Scorers In FA Women’s Super League)

Anna Margaretha Marina Astrid “Vivianne” Miedema was born on 15th July 1996. Her place of birth is in Hoogeveen in Netherlands. She plays in the position of a forward for FA WSL club, Arsenal from 2017 till the present. Before this, Vivianne played for the club, SC Heerenveen from the year 2011 to 2014. Then, she played for the club, Bayern Munich from 2014 to 2017. In November 2021, she received the prize, BBC Women’s Footballer of the Year.

On 29th October, in the 23rd minute of Arsenal’s match against Everton, she secured her 1st goal in the FA Women’s Super League (FA WSL). In opposition to Liverpool,  she scored the game-winning goal in the 29th minute. There, Miedema assisted Dominique Janssen’s goal in the 49th minute, and thus helped Arsenal in a victory by 3-0. Vivianne finished completed the 2017–18 episode with four goals in 11 games, along with nine starts. Therefore, Arsenal came in the third position in the season opener by 11–3–4.  The team was also victorious in the 2017–18 FA WSL Cup. In that tournament, Miedema secured the game-winning goal of 1–0 and won over Manchester City.

The date of birth of Lauren James is on 29th September 2001. She plays in the position of a forward for the FA WSL club, Chelsea. She created her challenging debut for Manchester United in a 1–0 League Cup victory over Liverpool on 19th August 2018. Lauren scored the first 2 goals in United’s 1st Championship game in 2018–19. Indeed, she won by 12–0 over Aston Villa. In September, Lauren got the name of the FA Women’s Championship player of the month after scoring 3 goals in Manchester United’s undefeated start to the season. Furthermore, she scored 4 goals in a 7–0 league victory over Crystal Palace on April 20, 2019.

Lauren created her under-17 breakthrough in a 2–0 friendly loss to the United States in April 2017. James was the captain of the England national team. Indeed, her squad won over Latvia by 10-0  in the UEFA Women’s Under-17 Championship qualifier on 14th October 2017. Also, she scored 4 goals in that match. She was first invited to the U-19 team for the Algarve Tournament in January 2019. Lauren was even called to join England’s group for the 2019 UEFA Under-19 Championship in Scotland in July 2019.

4. Kim Little (One Of The Greatest Goal Scorers In FA Women’s Super League)

Kim Alison Little was born on 29th June 1990. Her place of birth is Mintlaw in Scotland. She plays in the position of an attacking midfielder. Kim is the captain of the club of FA WSL, Arsenal. Kim also worked as a vice-captain in the Scotland women’s national team. She has made 139 appearances and scored 59 goals.

Furthermore, the skillful sportsperson was one of the only two Scottish sportspersons who were invited to the Great Britain team for the 2012 London Olympics.

The date of birth of Fara Tanya Franki Merrett is on 25th January 1984. Her place of birth is in London, England. Fara plays in the position of a central midfielder. The officials selected her for Team GB at the 2012 London Olympics. Fara began her senior professional football career in 2002 and got 172 caps for England Women’s squad. Therefore, she is popular as the highest-capped football sportsperson. Also, she was victorious in the FA Women’s Cup in 2010. Also, she won the Premier League Cup in the year 2008. In 2002, she even got the title of the Football Association Young Player of the Year.

You can read this article also to know about the top 5 scorers of Bundesliga | all time.

We hope you enjoyed our article on the Greatest Goalscorers in FA Women’s Super League | All Time. Please drop your thoughts in the comment box. The information for this article is acquired from fourfourtwo.com. Since this topic is subject to change, our website (www.footballtipmaster.com) provides no guarantee for the accuracy of the information.