Skip to content
Home » Who Has The Highest Goals In A Calendar Year? | All-time Rankings. 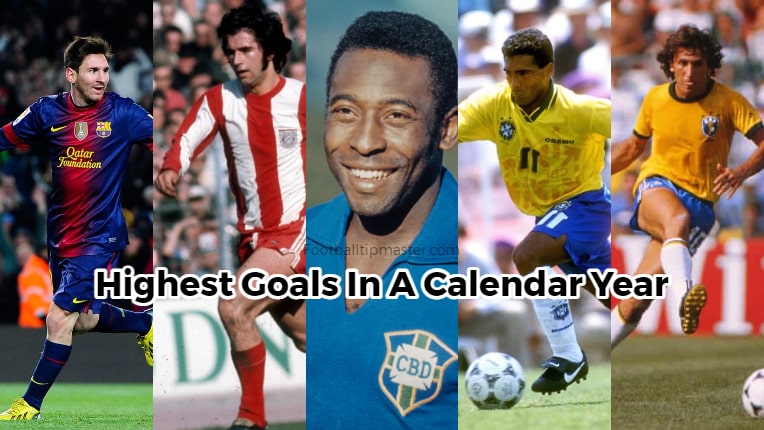 Who Have Scored Highest Goals In A Calendar Year?

Lionel Messi continues to lead the elite list, having scored 91 goals in a calendar year in 2012. While Robert Lewandowski is the highest goal-scorer in all competitions for club and country in 2021, he also leads the goal-scoring charts when the top five football leagues in the world and other major club competitions, such as the Champions League and the UEFA league, are included.

Top 5 Football Players Who Has Highest Goals In A Calendar Year.

Lionel Messi, the Argentine football star, is widely regarded as one of the greatest players of all time. Throughout his Barcelona career, his performances captivated the football world. During his prime, he was a ruthless goal scorer who used to score from the most inconvenient angles. His abilities on the field were impressive, and he was adored by football fans all over the world.

After four decades, Lionel Messi broke Gerd Muller’s record of 85 goals in a calendar year in 2012. That year, the Argentine star Leonel Messi scored 91 goals in 69 games for both his country and club; an incredible feat. Let’s take a look at his stats at FC Barcelona: 59 goals in 38 La Liga appearances, 5 goals in 8 Copa del Rey games, 2 goals in 2 Supercopa games, and 13 goals in 12 UEFA Champions League games. That year, he also won his fourth consecutive Ballon d’Or.

After a successful career in Barcelona, Lionel Messi moved to Paris Saint-Germain to work more closely with ex-teammate Neymar Jr. This Barcelona legend, on the other hand, is the only player in history to have scored 50 or more goals in his football career 9 times, including a record-breaking 91 goals in a calendar year (2012), breaking Gerd Muller’s previous record of 85 since 1972.

Gerd Muller scored 85 goals in 60 appearances for West Germany and Bayern Munich in 1972. In 1971-72, he led Bayern Munich to the Bundesliga title after scoring 42 goals in 34 games. After 40 years, his record of 85 goals streaks was broken by Lionel Messi in 2012. Gerd Muller, one of Germany’s most famous strikers, was and still is known for his highest goal-scoring. He also held the record for most goals in a season (42 in 1972), which was broken by Robert Lewandowski. Aside from that, he set a record by scoring 14 goals in the World Cup, a record that has stood for 32 years. Nonetheless, Gerd Muller managed to hold this highest goal in a calendar year record for 49 years since 1972. Not only that, but Gerd Muller has also scored 50 or more goals in a calendar year 5 times.

Pele, a Brazilian legend, is one of the few players who has consistently scored goals. Pele made his FIFA World Cup (Jules Rimet Trophy) debut in 1958 at the age of 17. In the tournament’s semi-final, he also scored a hat-trick against France. Pele is the youngest player in football World Cup history to score a hat-trick. In the same year, Pele scored 75 goals for both his country and his club Santos.

He was probably the most famous and possibly the highest-paid athlete in the world during his time. He was a member of the Brazilian national teams that won three World Cup titles (1958, 1962, and 1970). He is one of only a few Brazilian football players to have scored the most goals (1279 goals) in their career. In his career, Pele has scored 50 or more goals in a calendar year 5 times.

Zico, who is now the manager of Iraq, played for Brazil for a dozen years, winning 72 caps and scoring 52 goals. In his career, he played for Flamengo in Brazil, Udinese in Italy, and Kashima Antlers in Japan. He scored 476 goals in 699 games and 48 goals in 71 games for Brazil. In official games, he appeared in a total of. 524 goals were scored by him. Zico is said to have scored 699 goals in other warm-up commercial matches, but this is not officially recognized. According to legend, Zico scored 89 goals in 1979, including 81 for the club and 8 for the national team. However, it is still not recognized. Zico scored 72 goals in 1979, the year he was officially recognized.

Many people are unaware that Romario is the seventh-highest goalscorer in soccer history, with 780 goals in 1000 appearances. He is also the fourth-highest goalscorer for his country, trailing only Pele, Neymar Jr, and Ronaldo Nazario. Romario is proud to have won the FIFA World Cup with Brazil in 1994, where he also received the Golden Ball. Romario scored 72 goals for Brazil and his club Vasco da Gama in 2000. He also led the Brazilian league in goals three times.

Romario was nearly unplayable at his peak. Romário retired from football in 2008, but he returned in 2009 to play one game for América, a Brazilian second-division club he was managing at the time and his late father’s favorite team. Romário entered politics after his football career ended. He took Off the field, he caused his fair share of havoc, but when he had the ball in his hands, few could move with such speed and agility. Even in the depths of his career, he remained lethal in front of goal.

Also, Check out: Rankings Of The Top Indian football clubs in terms of most wins in 2021.