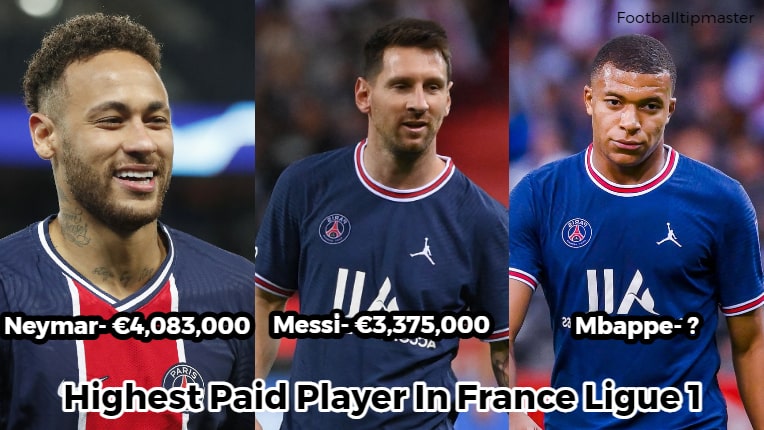 Ligue 1 Players Salary/Highest-Paid Player In Ligue 1: Footballtipmaster.com has revealed the list of the highest-paid players in Ligue 1 based on the French publication L’Equipe. The majority of the highest-paid players in the Ligue 1 championship were all PSG (Paris Saint-Germain) players. Ligue 1 has undoubtedly been the talk of the town during this year’s summer transfer window. Things appear to be moving in the right direction for France’s top-tier football.

Paris Saint-Germain appears to be on track to win the Ligue 1 title this season, which should come as no surprise given the amount of money they are spending on player salaries. Last season, Lille emerged as the new champion in the league previously dominated by PSG. PSG went all-in to sweep the transfer market in their favor to bolster their side and reclaim the Ligue 1 trophy.

Its definition is straightforward: by referring to Ligue 1 as a “farmers league,” they jokingly suggest that it is a competition comprised of people who work in agriculture during the day and play football in the evening. While the French league is one of the most anticipated battlegrounds this season, let’s take a look at who has received the highest pay in Ligue 1. However, with PSG being the sole dominant force in Ligue 1 in terms of financial matters, it’s not surprising to discover where these players are from.

The salaries of Ligue 1 players have been revealed by the French publication L’Equipe, and it has been revealed that PSG ace Neymar is the highest-paid player in the league overall. The Brazilian, the most expensive player who joined the club in 2017 for a world-record fee of €222 million from FC Barcelona, earns €4.083 million per month, more than Lionel Messi and Kylian Mbappe.

Messi, on the other hand, is the club’s second-highest player earning €3,375,000 per month. Messi’s contract in PSG is undoubtedly lower than what he received at FC Barcelona in recent years. The seven-time Ballon d’Or winner netted €61 million per year at the Spanish club. According to L’Équipe, Messi earns €25 million net per season in Paris, plus a loyalty bonus of €15 million gross, bringing his salary to more than €30 million. Since Messi arrived at PSG last August, the club has signed several contracts, including one for Fan Tokens, the PSG club’s cryptocurrency, which pays the Argentine €1 million. According to a recent agreement with Crypto.com, the current Ligue 1 players will earn between €25 million and €30 million per year.

Kylian Mbappe is the third highest-paid player at PSG, after Neymar and Messi, with €2,220,000 salary per month. The young man Mbappe is on the same contract as five years ago, and he receives €2.2 million gross per month, a figure that would have increased if he agreed to sign a new deal at the club.

Marquinhos is a young Brazilian player who earns €1,200,000 per month as a professional football player, ranking fourth on the list of highest-paid players in Ligue 1. Marcos is a defender for the Ligue 1 club PSG (Paris Saint-Germain), which he captains, as well as the Brazil national team. He is primarily a central defender, but he can also play as a right-back or defensive midfielder. He signed a five-year contract with Paris Saint-Germain in July 2013 for a fee of €31.4 million.

Marco Verratti is an Italian footballer who plays central midfield for PSG (Paris Saint-Germain) in Ligue 1 and the national team of Italy. He is frequently regarded as one of the world’s top midfielders. With a monthly gross salary of €1,200,000, he is the fifth highest-paid player in Ligue 1.

Winners of the French Ligue 1 Since 2000, the winners of France’s top football league, Ligue 1, have been listed here.

Note: The 2019–20 Ligue 1 season was suspended in March 2020 due to the COVID-19 pandemic in France; the season was cut short, and the final standings (including PSG as champions) were declared by a points-per-game ratio on April 30, 2020.

How many Ligue 1 Has PSG Won? What trophies has PSG won?

Read more about: Who Are The Greatest Defenders In La Liga?

We hope you enjoyed our article on who is the highest-paid player in Ligue 1. Please drop your thoughts in the comment box. The information for this article is acquired from Wikipedia & L’Equipe. Since this topic is subject to change at any time our website (www.footballtipmaster.com) provides no guarantee for the accuracy of the information.