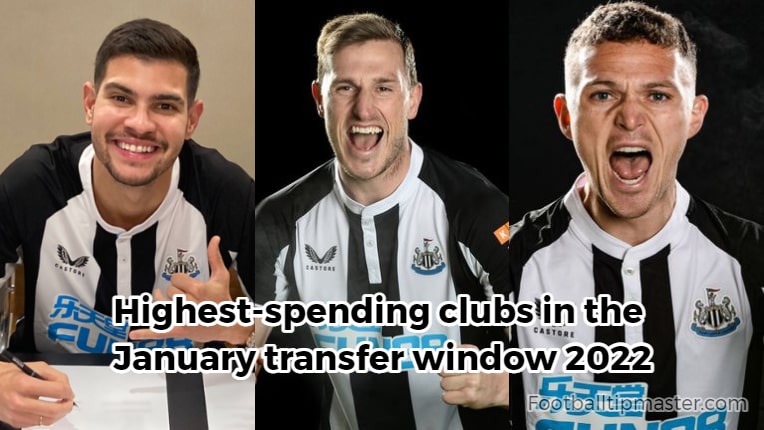 Here are the top five highest-spending clubs in the January transfer window 2022. Few teams broke the bank to add strength and depth to their rosters. The January 2022 transfer window closed on January 31, 2022, after some frantic activity by the clubs. It provided the best opportunity for respective football teams to bolster their squads in preparation for the new season. Some high-profile moves resulted in hefty transfer fees. Newcastle was the biggest spender, flexing its financial muscles under the club’s new Saudi-led ownership, while Everton was the only top-five side to significantly strengthen. As with transfer windows, some clubs were very active while others were not, and we look at five of the highest-spending clubs here.

Newcastle United’s new Saudi-rich owners wasted no time in making a transfer window splash, bringing in seven players for a total net spend of €102.1 million. Faced with relegation, the club decided to bring in players such as Kieran Tripper and Chris Wood, as well as break the club record fee to sign Bruno Guimaraes from Lyon. The updated list of Newcastle player transactions during the January 2022 transfer window, as well as the updated squad list, can be found below.

Juventus are struggling in Serie A this season and made a move to improve their fortunes by signing five players, including Dusan Vlahovic from Fiorentina for a whopping €81.6 million. Denis Zakaria and Federico Gatti were two other notable players signed by the Turin giants.

Pierre-Emerick Aubameyang stated that he joined Barcelona to help them return to the Champions League and win the prestigious title. The 32-year-old has had a successful career in Europe, but he has yet to win the elite European title. Barcelona is struggling financially due to mounting debt, but they have still managed to bring in Adama Traore on loan from Wolves while spending €55 million to sign Ferran Torres from Manchester City. Barcelona, on the other hand, has made headlines by signing him for a record fee of £46.3 million on January 3, 2022.

Liverpool was not expected to be in the transfer market, but they spent a lot of money to sign Luis Diaz from Porto after it was revealed that he had agreed to terms with their rivals, Tottenham Hotspur. Liverpool strengthened their squad in the January transfer window 2022 by signing Porto star Luis Diaz on January 30, 2022, for £33.3 million. It’ll be fascinating to see how the winger adjusts to life in the Premier League.

Everton is the second-longest continuously serving club in English top-flight football and is ranked third all-time in terms of points. Everton was another Premier League team that had struggled this season and needed to make additions to their squad to climb the table. In addition, they signed six players, the most notable of which were Dele Alli on a free transfer and Donny van de Beek on a loan transfer. Everton was one of the 32 UEFA clubs with the highest enterprise value in 2021. Its midpoint enterprise value was 455 million euros in the same year. They also hired a new manager, Frank Lampard, who signed a two-year contract to replace Rafa Benitez.

Learn more about: Top 10 Current Most Popular Soccer Players In The World | Who is the most famous soccer player in the world? 2021-22 Updates

We hope you enjoyed our article on the Top 5 highest spending clubs in 2022. We hope you enjoyed our entire highest spending clubs in 2022. This article has been updated following the official The Guardian results. Please leave valuable feedback in the comments section below. The information on this page is subject to change at any time. Our website (www.footballtipmaster.com) makes no guarantees about the accuracy of the information.