Skip to content
Home » FIFA World Cup most Goalscorers: You must know who has scored the most FIFA world cup goals. 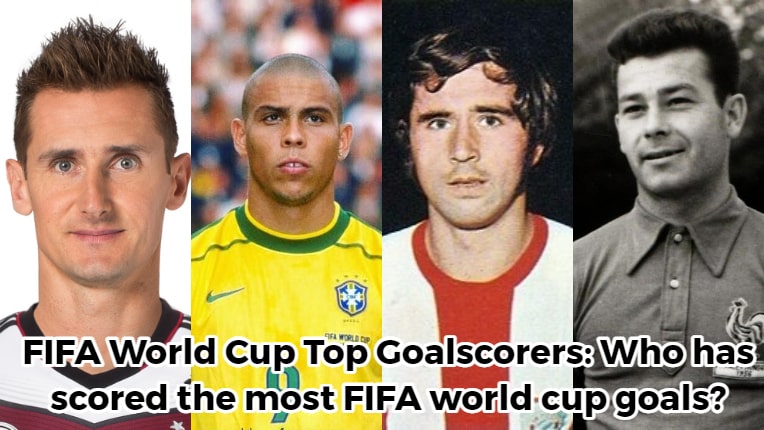 More than 1,250 footballers have scored goals in World Cup final tournaments since the first goal was scored by French player Lucien Laurent at the 1930 FIFA World Cup, with only 97 players scoring five or more

Just Fontaine of France sweetened on this record at the next tournament, scoring 13 goals in only six games. Gerd Muller scored ten goals for West Germany in 1970 and broke the all-time record with his 14th goal in the World Cup final tournament during West Germany’s victory in 1974. His record stood for over three decades until Ronaldo’s 15 goals for Brazil between 1998 and 2006. Here’s a list of the top 10 players who have scored the most goals in World Cup history.

Miroslav Klose of Germany went on to score a record 16 goals in four consecutive tournaments between 2002 and 2014. Only six players have averaged two goals or more per game played in World Cup finals: Kocsis, Fontaine, Stabile, Russia’s Oleg Salenko, Switzerland’s Josef Hugi, and Poland’s Ernst Wilimowski, who scored four goals in his single World Cup game in 1938. The top 97 scorers have represented 28 different countries, with 14 scoring for Brazil and another 14 for Germany or West Germany. There were 64 footballers from UEFA (Europe), 29 from CONMEBOL (South America), and only four from other countries: Cameroon, Ghana, Australia, and the United States.

With 13 goals in 1958, Fontaine holds the record for most goals scored in a single tournament. Kocsis came closest in 1954, Müller in 1970, and Portugal’s Eusebio in 1966, with 11, 10, and 9, respectively. In 1962, six players tied for the lowest-scoring top scorer with four goals each. Throughout the 21 World Cup finals, 30 footballers have been credited with the most tournament goals, and no one has done so twice. Nine footballers scored at least seven goals in a tournament, with Brazil’s Jairzinho becoming the only player to do so without being the tournament’s top goalscorer in 1970.

These top 30 scorers represented 19 different countries, with Brazil having the most (five). Another five came from South American countries, with the remaining twenty from Europe.

Miroslav Klose is a former player and professional football manager from Germany. He is now the head coach of the Austrian Bundesliga club Rheindorf Altach. Miroslav Klose, a striker, is Germany’s all-time leading scorer and holds the record for most goals scored in FIFA World Cups. No player has scored more goals in the World Cup finals than German striker Miroslav Klose, who has 16 goals in 24 appearances across four tournaments. Klose made his World Cup debut in 2002, in Japan and South Korea, and got off to the best possible start, scoring a hat-trick in Germany’s 8-0 victory over Saudi Arabia in the Sapporo Dome. He is one of 13 players to score a hat-trick in their World Cup debut, but no one has done so since Klose on this date in 2002.

Miroslav Klose went on to score in all three of Germany’s group stage games at the 2002 World Cup, but he failed to score in any of his four knockout games as they finished as losing finalists to Brazil, who finished with the tournament’s top scorer, with Ronaldo’s eight goals leading them to victory. The German striker scored five more goals in his home country during the 2006 World Cup, earning him the tournament’s Golden Boot. Four more goals followed in the 2010 World Cup in South Africa, before adding two more in 2014 in Brazil to surpass Ronaldo’s tally of 15 – the all-important 16th coming in front of Ronaldo himself, who was watching in the stands as Brazil emphatically lost 7-1 to Germany in Belo Horizonte. Klose’s 16 World Cup goals came from just 63 shots, a phenomenal 25.4% conversion rate across the four tournaments he played in.

Ronaldo is Brazilian football (soccer) player who captained Brazil to a World Cup victory in 2002. Between 1996-97 to 2002, he received three Player of the Year awards from FIFA. Ronaldo has played 98 matches for Brazil, scoring 62 goals, and is the third-highest goalscorer for Brazil. He was the youngest footballer of Brazil’s World Cup-winning squad in 1994, at the age of 17. Ronaldo no longer holds the World Cup scoring record; his 15 goals in 19 appearances across three tournaments now ranks second on the list.

His first World Cup appearance came in 1998 when he scored four goals in seven games in France. His Brazil team lost 3-0 to the host nation France in the final. Ronaldo’s performance at the 2002 World Cup was less aggressive, as he won the Golden Boot with eight goals in seven games, including both goals in the 2-0 final victory over Germany in Yokohama, for which he was named man of the match.

The most impressive aspect of Ronaldo’s 2002 performance was that he had been injured for a long time earlier in the tournament due to a cruciate ligament rupture two years before the finals, which meant he missed Brazil’s entire qualification campaign for the 2002 World Cup. Despite finishing as the top scorer in the CONMEBOL World Cup qualifiers with 10 goals, there were concerns about Ronaldo’s fitness. He finished with three goals in five games before Brazil’s quarter-final loss to host nation Germany, bringing his total tally in World Cup final tournaments to 15 gaols record at the time, surpassing Gerd Muller’s record that had stood since 1974 (14 goals).

Gerd Muller is a former German professional football (soccer) player who was a prolific goal scorer. He scored 68 goals in 62 international games, a remarkable 1.08 goals per game. Gerd Muller scored 14 goals in just two World Cup tournaments, with his 10 goals on his way to winning the Golden Boot in the 1970 World Cup only three times a player to hit double figures in a single tournament. No player has scored more goals in any of the last 15 men’s World Cup final tournaments than Muller did in 1970.

The West German striker scored in all five of his World Cup appearances, including back-to-back hat-tricks against Bulgaria and Peru in Mexico in 1970, with only three days between the trebles. Only one other player, Hungary’s Sandor Kocsis, has scored a hat-trick in two consecutive World Cup appearances (also over four days). Muller scored in every game of the 1970 World Cup until the semi-final loss to Italy (two goals), but he was held scoreless in the third/fourth playoff against Uruguay.

Gerd Muller, Bayern Munich’s all-time leading scorer, added four more goals in seven appearances at the 1974 World Cup, including the game-winning goal in the 2-1 victory over the Netherlands in front of his home crowd at the Olympiastadion in Munich. For 32 years, Gerd Muller held the all-time World Cup goalscoring record with 14 goals, until Brazilian Ronaldo surpassed him in 2006. Throughout his career, he was known as one of the best strikers inside the penalty box. All 14 of his World Cup goals came inside the penalty box, with half of them (7) coming inside the six-yard box.

Just Fontaine is a former professional footballer from France. He is best known for scoring the most goals in a single FIFA World Cup edition, scoring 13 in six matches during the 1958 tournament. This was his only World Cup appearance, but he certainly made the most of it. At a FIFA Awards Ceremony in 2004, Pele named him one of the 125 Greatest Living Footballers. He scored in each of his six appearances in the 1958 tournament in Sweden, with his 13 goals more than doubling the next highest scorers at the finals that year, Pele and Helmut Rahn, both of whom had six goals.

The French striker, along with Sandor Kocsis (1954) and Gerd Muller (1970), is one of only three players to score at least five goals in two separate World Cup finals tournaments, thanks to a hat-trick against Paraguay and four more goals against Germany in the 1958 World Cup. Despite his outstanding performance in 1958, when he scored 57% of France’s 23 goals, he could only help his country finish third after losing in the semi-finals to eventual winners Brazil. Just Fontaine played his final match in July 1962, forced to retire at the age of 28 years and 11 months due to a recurring injury. He briefly managed the France national team in 1967 but was fired after only two friendly games, both of which were losses.

With 12 goals in four tournaments, Pele ranks fifth among FIFA World Cup Most Goalscorers in Finals. While he never won the Golden Boot, he did win the Best Player award at the 1970 World Cup for his four goals and six assists in leading Brazil to victory one of three World Cup titles won by Pele, a record tally. Pele is the all-time highest goalscorer for Brazil in international football. In 92 official matches recognized by FIFA, the legendary forward Pele scored 77 goals. The record has remained untouched for five decades but Neymar may soon surpass Pele’s tally who currently has 74 goals to his name as of July 2022 statistics.

Pele was more than just a goal scorer. No player has assisted more World Cup goals in a single tournament (six in 1970) than the Brazilian legend since detailed data collection began in 1966. Pele still holds the record for most goals scored by a Brazilian man in international football, with 77, but Neymar is only three goals away from matching this total. Check out below who is Pele?