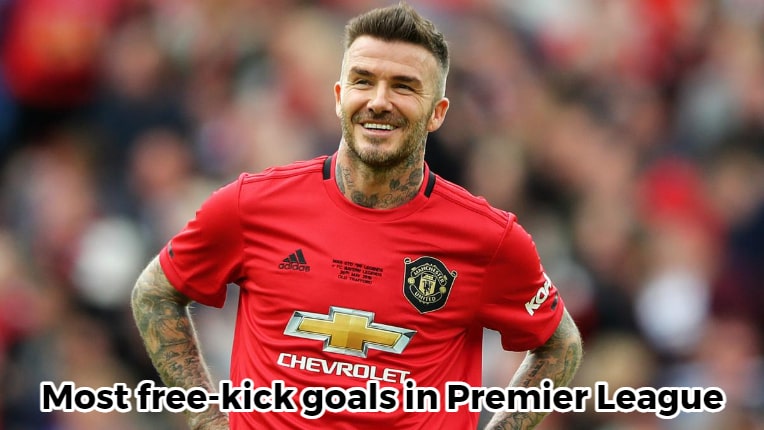 The Premier League has produced some of the greatest free-kick goal scorers in history, so we’ve compiled a list of the top 5 most goals scorers in the history of the Premier League game. Direct free-kick goals are one of the most satisfying sights on a football field. It necessitates flawless technique and poise on the part of the player. Taking free kicks on the practice field and converting them is very different from doing so during a game.

List of top 5 players who have scored the most free-kick goals in Premier League ever?

Who has the most free-kick goals in Premier League history?

1. David Beckham Has The Most Free-Kick Goals In Premier League History- 18

David Beckham is not only the best free-kick taker in Premier League history; he is also one of the most technically gifted strikers in the history of the beautiful game. He was so good at it that it inspired a movie called ‘Bend it like Beckham.’ The Englishman deserves a lot of credit for his meticulous technique and ability to make a difficult task look beautiful. Beckham used to practice free kicks by suspending a tire from the goalposts. He would try to slot the ball in through the tire consistently, which is one of the reasons for his extremely accurate set-pieces.

Thierry Henry is one of the best players in Premier League history. During his prime, he was arguably Europe’s best striker. The Frenchman’s impeccable technique and ability to come up clutch earned him cult status among Premier League fans.

Henry was phenomenal during Arsenal Wenger’s early years when the Gunners dominated Manchester United and broke their league title monopoly. Henry was a dynamic and versatile marksman with exceptional finishing ability. During the early 2000s, Henry was arguably the best free-kick taker in the Premier League. He scored 12 free-kick goals in the English Premier League before joining Barcelona in 2007 after a ten-year stint at Arsenal.

Zola rose to prominence with Serie A side Napoli, where he was a member of their title-winning team in 1990, alongside the legendary Diego Maradona, before moving on to form part of a cult Parma side in the 1990s. He joined Chelsea in 1996, as the Premier League welcomed several exciting newcomers, and his supreme technical ability quickly became legendary.

In addition to creating numerous chances and assisting his teammates, Zola was also very dependable when it came to set-pieces. The Italian was well-known for his ability to play Deadball. One of the most appealing aspects of Zola’s game was his bending free kicks. He scored 12 goals from direct free-kicks in total. He left Chelsea before the Jose Mourinho era and has yet to win a Premier League title.

Cristiano Ronaldo was rapidly adding new skills to his repertoire when he was burgeoning into a monster during his first stint with Manchester United. During this period, the Portuguese international progressed from a dazzling winger to a prolific goalscorer. Ronaldo arrived in England as a scrawny teenager in 2003, after Manchester United manager Sir Alex Ferguson paid Sporting Lisbon £12 million to sign him.

Many top players today imitate Ronaldo’s knuckleball technique, in which he induces a lot of power, dip, and swerve on the ball. Even his teammate Marcus Rashford’s free-kick-taking style resembles Ronaldo’s. The 36-year-old scored 11 direct free-kicks in the Premier League between 2003 and 2009. After a productive spell with Juventus, the five-time Ballon d’Or winner returned to the Premier League and Manchester United last summer and will be hoping to climb further up these rankings.

Which team/club has scored the most goals in Premier League history?

Liverpool’s victory moved them within three points of Premier League leaders Manchester City with ten games remaining this season. Although City leads the Premier League table this season, they trail Liverpool in terms of all-time goals in the competition, which began in 1992. Manchester United was the first team to reach 2,000 goals, and they currently have 2,173. Man City is sixth on the list with 1,627 points, trailing Tottenham (1,716), Chelsea (1,953), and Arsenal (1,997).

How many Premier League free-kicks has Ward-Prowse scored?

James Ward-Prowse attempts to avoid being predictable with his set-pieces, but one thing is inevitable: they almost always end up in the net. It’s now 13 Premier League goals from free-kicks, which puts him ahead of Thierry Henry and Gianfranco Zola, with David Beckham’s 18 all-time leading free-kicks.

James Ward-Prowse is the Premier League’s most skilled free-kick taker, having scored four direct free kicks for Southampton during the 2020-21 season. Two of his free-kicks came against Aston Villa in a 4-3 win for the Saints.

We hope you enjoyed our article on the Top 5 players with the most free-kick goals in Premier League. Please drop your thoughts in the comment box. The information for this article is acquired from Premier League. Since this topic is subject to change, our website (www.footballtipmaster.com) provides no guarantee for the accuracy of the information.