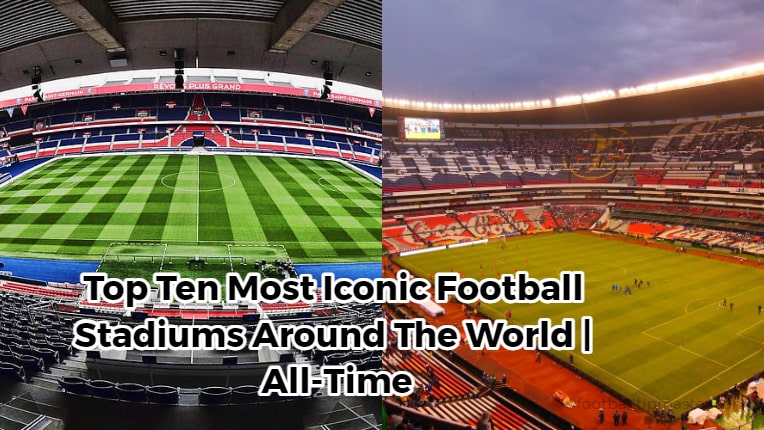 Which Is The Most Iconic Football Stadiums Around The World

1. Wembley Stadium, London, England (One of the Top Ten Most Iconic Football Stadiums Around The World)

Wembley Stadium is regarded as the home of soccer and has witnessed some of the game’s most memorable moments. The most amazing and beautiful scenes of the football game have been seen here. The football players have set the most famous historical records here.  Manchester United’s European Cup victory over Benfica,  England’s 1966 World Cup victory, and Germany’s 1996 European Championship victory, are examples of such memories. Furthermore, Germany’s win of the European Championship in 1996 which featured the first Golden Goal in history, was captured in this football stadium. It also serves as the yearly home of the FA Cup, one of the sport’s ancient tournaments.

The Santiago Bernabeu, where the Los Merengues play, first officially opened in 1947. It has a total capacity of approximately 85,000 people. Officials changed the stadium’s name after Santiago Bernabeu Yeste, presumably the club’s best leader. Indeed, this stadium saw some of the greatest players over the history of football, including Alfredo Di Stefano Zinedine Zidane. Moreover, the Bernabeu has hosted numerous grand finals. It was home to one of the biggest club groups in global soccer history in the 1970s.

The inauguration date of the Nou Camp (or Camp Nou) is 24th September 1957. This stadium is located in Barcelona, Catalonia in Spain. It has a capacity of just under 1  lakh people. So, people consider it as one of the largest stadiums in the world. Also, it is the largest stadium in Spain and Europe. Therefore, this stadium has organized 5 matches of the 1982 FIFA World Cup. Two out of four tournaments of the European Nation’s Cup were also played here. The final of the Summer Olympics of 1992 was hosted here. The Catalonian squad plays their home games there.

4. Estadio Do Maracana, Rio De Janeiro, Brazil (One of the Top Ten Most Iconic Football Stadiums Around The World)

The Estádio do Maracana, is the greatest iconic stadium in Brazil. Its inauguration year is 1950. Later, the officials decided to modify it for the 2014 World Cup finals. This stadium’s name is after the Rio Maracanã, a canalized river in Brazil’s Rio de Janeiro. This stadium has a capacity of 78,838 audiences.

The stadium hosted the 1950 World Cup final.  In that championship, Brazil got defeated by Uruguay. The significant football clubs – Flamengo, Botafogo, Fluminese, and Vasco have mentioned the stadium as home many times. Excellent players such as Zico and Garrincha have played on this ground. Also, Pele scored his one-thousandth goal on this football ground.

The inauguration date of this football stadium is 19th September 1926. Stadio Giuseppe Meazza football stadium or San Siro, is located in the San Siro district of Milan, Italy. It is the home to the most famous teams, Inter Milan and AC Milan. This stadium’s name was given after Giuseppe Meazza, who won the World Cup in 1934 and 1938.

Truly, San Siro is classified as a UEFA category four stadium. It organized 3 FIFA World Cup tournaments in 1934, 6 FIFA World Cup games in 1990, 3 UEFA Euro 1980 games, and 4 European Cup finals.  In addition, the stadium will conduct the grand opening for the 2026 Winter Olympics of Cortina d’Ampezzo and Milan.

The Amsterdam Arena is the first venue where a complete Soccer game was shown to a large number of people. That is the main cause to include it on this list. Nevertheless, many great footballers, such as Johann Cruyff, and some great Ajax teams have also graced this stadium. The inauguration year of this stadium is 1934. This stadium can accommodate approximately 20,000 people. The Dutch national team of soccer played 5 global matches on this ground and even won all of them.

The Estadio Centenario was the first stadium in which football players lifted the World Cup trophy. The stadium was constructed for the first World Cup, which was organized in the year, 1930. In that championship, Uruguay won over Argentina. This football ground is there in Parque Batlle of Montevideo, which is in Uruguay. The stadium can accommodate about 60,235 audiences. It serves as the national stadium for the Uruguay football squad and also for Penarol.

9. Olympiastadion, Munich, Germany (One of the Top Ten Most Iconic Football Stadiums Around The World)

Olympiastadion München stadium is there in Munich of Grermany. This stadium was constructed for the Summer Olympics of 1972. Its inauguration date is 26th May 1972. This football ground can accommodate up to 69,250 people. Many important soccer tournaments took place in the stadium such as the 1974 FIFA World Cup final, UEFA Euro 1988 final, etc.

This stadium is the home of the Paris Saint Germain (PSG) football club. Parc des Princes is located in Paris, France. It can accommodate around 47,929 viewers. The football club’s inauguration date is 25th May 1972. The football tournaments played in this stadium are the 1938 FIFA World Cup, UEFA Euro 1984, 2019 FIFA Women’s World Cup, amongst others.

You can also read this article to know the top 10 best Argentina players of all time.

This is also a good article on the top six best women’s football clubs in the world.

We hope you enjoyed our article on the Top Ten Most Iconic Football Stadiums Around The World. Please drop your thoughts in the comment box. The information for this article is acquired from 1sports1.com. Since this topic is subject to change, our website (www.footballtipmaster.com) provides no guarantee for the accuracy of the information.