Skip to content
Home » Most Popular Team In Football: Do you know who are the most supported football clubs in the world? 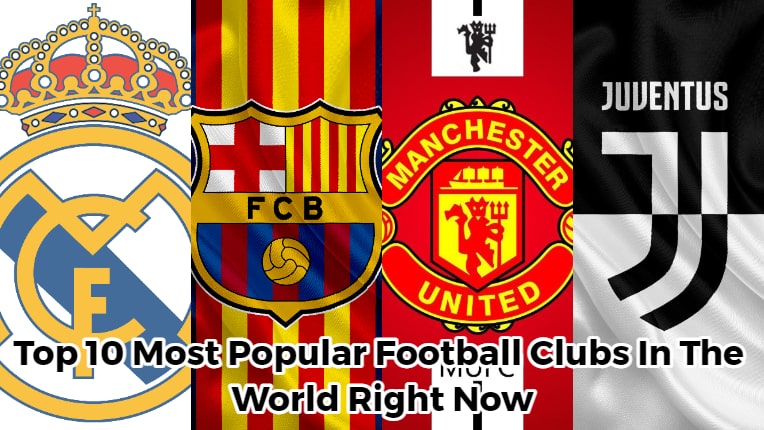 The following is a list of the top ten most popular football clubs in the world right now. The rankings are based on a global fan base and social media platforms such as Instagram, Facebook, and Twitter. As we all know, football has become the most popular around the world, also club football is now more popular than international football. Fans from all over the world cheer on their team.

Some football clubs are also popular due to sponsorship deals. The football club’s jersey is another reason for the club’s popularity, as are the trophies and cups won by the team. Real Madrid and Barcelona had the world’s largest fan bases. In addition, only two teams in the world have more than 200 million followers. The superiority of Spanish clubs over the rest of the world has been demonstrated by both Barcelona and Real Madrid. We also have Premier League giants, German champions, Italian champions, and the French capital. These are the best European clubs and are regarded as among the most famous in the world. There are others, but these are the top ten best football clubs in the world.

Most popular team in football

For more details take a look at the Top 10 most popular football clubs in world:

Many people may wonder why Real Madrid is the best club in the world. Here’s a quick answer for you. Real Madrid, Spain’s pride and a titan atop the list of all-time Champions League winners, is known for its dynamic goals and celebrity players. However, as we will see, the recent success of the world’s best club is due in large part to a culture of innovation that extends far beyond the football field. Real Madrid has the most fans worldwide in football. While the club’s history is impressive, Real Madrid is one of football’s most successful teams. The club has 68 domestic trophies, including a record 35 La Liga titles, 19 Copa del Rey, 12 Supercopa de Espana, a Copa Eva Duarte, and a Copa de la Liga.

Champion of the year Real Madrid is the most successful team in the UEFA Champions League, having won the competition 14 times. AC Milan comes in second with seven. Bayern Munich of Germany and Liverpool of England have won the annual showpiece six times each.

FIFA Club of the Century was a FIFA award given to the best football club of the 20th century. Real Madrid won the award with 42.35% of the vote, which was announced at the annual FIFA World gala in Rome on December 11, 2000. Real Madrid is without a doubt the world’s most popular football club right now.

Being one of Spain’s two most dominant clubs has allowed Barcelona to amass an incredible number of trophies. FC Barcelona is well-known for its historically skilled and appealing brand of attacking football, which emphasizes flowing, open play. The team is part of a larger sports and social organization that has thousands of members. Domestically, Barcelona has won a record 75 trophies, including 26 La Liga titles, 31 Copa del Rey titles, thirteen Supercopa de Espaa titles, three Copa Eva Duarte titles, and 2 Copa de la Liga titles, as well as being the record holder for the latter 4 competitions.

The club has won 20 European and worldwide titles in international club football, including five UEFA Champions League titles, a record 4 UEFA Cup Winners’ Cups, a joint-record 5 UEFA Super Cups, a record for 3 Inter-Cities Fairs Cups, and 3 FIFA Club World Cups. Barcelona was first in the International Federation of Football History & Statistics Club World Ranking in 1997, 2009, 2011, 2012, and 2015, and is currently ranked sixth in the UEFA club rankings as of May 2022. To summarise, Barcelona is the more successful team in Spain, having won 75 major trophies to Madrid’s 68.

Juventus is one of Italy’s oldest and most successful clubs, having won more Italian league titles than any other. The Juventus club is known as La Vecchia Signora, or the Old Lady, a paradoxical nickname given that Juventus means ‘youth’ in Latin. A group of grammar school students founded Juventus in 1897. The Juventus club, which did not play an official league match until 1900, began with pink shirts. Juventus, Italy’s most successful club of the twentieth century, has won the Italian League Championship, the country’s premier football club competition organized by Lega Nazionale Professionisti Serie A (LNPA), a record 36 times and has the record of consecutive triumphs in that tournament (nine, between 2011–12 and 2019–20).

They have also won the Coppa Italia fourteen times, becoming the first team to successfully retain the trophy with their triumph in the 1959–60 season, and the first to win it in three consecutive seasons from the 2014–15 season to the 2016–17 season, before going on to win a fourth consecutive title in 2017–18. (also a record). Furthermore, the club has nine Supercoppa Italiana victories, the most recent coming in 2020. Juventus has won more official competitions than any other club in the country. And the team is now the world’s fourth most popular club.

Chelsea is the world’s fifth most popular football club. The team Chelsea is a West London-based English professional football club. Chelsea has won the UEFA Champions League for 2020-21. Chelsea was at the pinnacle of its popularity in the mid-1960s, with many big-name celebrities becoming regulars at Stamford Bridge. For the first time in its history, the club was considered a legitimate contender.

They are France’s most successful club, having won more than 40 official awards, including ten league titles and one major European trophy. For PSG players, the Parc des Princes is their home ground. Parc des Princes is an all-seater football stadium in Paris, France, located in the southwest of the city, within the 16th arrondissement, near the Stade Jean-Bouin and Stade Roland Garros.

PSG formed in 1970 as a result of the merger of Paris FC and Stade Saint-Germain. Many current stars play for Paris-Saint-Germans, including Neymar, K Mbappe, Messi, and others. After leaving Barcelona in August 2017, forward Neymar joined Paris-Saint-German. It was the most expensive player in the world, with a price tag of €222 million. PSG also signed Kylian Mbappe for €180 million the following year.

Bayern Munich has been one of the most successful football clubs in recent years. The club Bayern Munich is by far Germany’s most successful club, having won 27 league titles, 18 DFB Cups, five UEFA Champions League titles, and a slew of other domestic and continental trophies. Apart from their on-field achievements, one of the main reasons for Bayern’s unparalleled popularity is the 50+1 rule that governs German football, which states that clubs must be majority-owned and controlled by their members rather than a single financial backer. Bayern Munich is an undisputed German football giant, with 27 Bundesliga titles, 18 DFB Cups, and five UEFA Champions League titles in their trophy cabinet. Bayern Munich is the world’s seventh most popular football club. Last year, Team’s official Facebook page gained a significant number of followers.

Arsenal is the only team to have gone undefeated in the Premier League (2003/04). The club’s tagline has long been Victoria Concordia Crescit, which translates as “Victory Through Harmony.” The Arsenal FC was founded in 1886 and was the first southern English club to join the Football League in 1893. Arsenal holds the record for the longest unbroken run in the Premier League. Henry, Thierry (1999-2006, 2012) Henry is a well-known arsenal legend. He was born on August 17, 1977, and is widely regarded as one of the greatest strikers of all time as well as one of the greatest Premier League players in history. Arsenal is one of the most successful teams in English football history, having played in the country’s top division every season since 1919 (Football League First Division until 1992, Premier League thereafter). It has won 13 league championships in the process.

Liverpool is the most successful club in England and has a global fan base. LFC club is one of England’s most popular football clubs. Liverpool Football Club is a Liverpool-based English professional football (soccer) club. With six European Cup/Champions League trophies, it is the most successful English team in European football tournament history. The club has also won the English Premier League 19 times. Domestically, the club has nineteen League titles, eight FA Cups, a record nine League Cups, and fifteen FA Community Shields to its credit. The club won 6 European Cups, 3 UEFA Cups, four UEFA Super Cups, all English records, and one FIFA Club World Cup in international competitions. Liverpool has won the most trophies in England, making them the most successful club in the country with the most combined English football and European trophies.

Manchester City Football Club is a professional football club based in Manchester, England. The club has won 29 major titles in its history, including eight League titles, six FA Cups, eight League Cups, six FA Charity/Community Shields, and one European Cup Winners’ Cup. Manchester City Football Club was founded in 1887 as Ardwick Association Football Club. Manchester City has won 2021/22 Premier League champions their fourth title successfully. The Premier League champions of 2022 are ranked 10th in the world’s most popular football clubs. The club’s current iteration adopted their sky blue home shirts in the first season, 1894, and have been used ever since. In terms of trophies won, it is the most successful & most popular football clubs in the world right now in English football history.