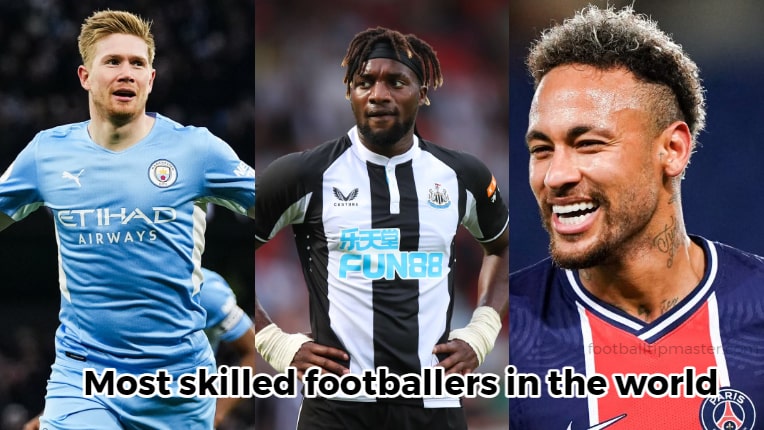 Some say watching a top-class footballer is the closest thing to watching dancing, with such finesse and elegance. The ability to dribble past multiple defenders and unlock a defense or even set up goals for your teammates is an art in itself, one that not many can master. Here we rank football’s best dribblers to show you who the fastest and most skillful footballers are in the world right now. Also, we did a little bit of research and came up with this list. So without further ado, let’s take a look at the Top 7 most skilled footballers in the world right now.

1. Cristiano Ronaldo is the most skillful player in the world

Cristiano Ronaldo is a Portuguese professional footballer who plays as a forward for Manchester United FC and captains the Portugal national team. He is considered the best player in the world. Ronaldo won five Ballons d’Or and four European Golden Shoes. Both of which are records for a European footballer. He has won 30 major trophies till now, including seven league titles, five UEFA Champions Leagues, one UEFA European Championship, and one UEFA Nations League. Also, Ronaldo holds the records for the most goals scored in the UEFA Champions League (127) and the joint-most goals scored in the UEFA European Championship (9). Ronaldo scored over 800 senior career goals for the club and his country.

After beginning his senior club career, he signed with Manchester United in 2003. He won three Premier League titles, one FA Cup, two Football League Cups, and one FA Community Shield. He also became the first player to win the FIFA Puskás Award. In 2009, Real Madrid signed Ronaldo for €94 million (then $131.6m). He won 15 trophies with them.

Saint Max is known for his speed, dribbling, and playmaking abilities. Alan saint maximin is the second-most skilled player right now. He has also won over 63 awards. After making his professional debut for Monaco in August 2015, he signed for German side Hannover 96 on a free transfer in July 2016. In June 2017, Saint-Maximin signed a four-year contract with OGC Nice, where he would go on to score nine goals and provide six assists in 36 appearances during his first season in Ligue 1. During his time at Nice, he has scored 18 goals and provided 12 assists overall. Finally, in August 2019, Saint-Maximin joined Newcastle United for £20 million on a six-year contract.

Kylian Mbappe plays as a forward for Ligue 1 club Paris Saint-Germain and also the France national team. He is widely considered one of the best as well as one of the most valuable players in the world. Mbappé came into prominence at an early age. He was voted the National Union of Professional Footballers (UNFP) Ligue 1 Young Player of the Year and awarded the Bravo Award by the Italian magazine Guerin Sportivo at age 17. At 18, he scored in his first-ever UEFA Champions League game. Also, he became the youngest French goalscorer in the league.

In 2017, Mbappe transferred to Paris Saint-Germain on an initial loan deal worth €180 million with an option to buy for an additional €42 million. The following year, he became the most expensive teenager. Also, he is one of only two players ever to have won two successive Under-19 World Cups. Furthermore, in 2018, he became just the third teenager in history to score at least 20 goals in a single season in one of Europe’s top five leagues.

Robert Lewandowski is a Polish professional footballer who plays striker for Barcelona. He is also the captain of the Poland national football team. Widely regarded as one of the best strikers in the world, Lewandowski is known for his positioning, technique, and finishing. He also possesses all of the necessary attributes of a traditional number nine: height, strength, pace, soft touch, an eye for goal, and an ability to link up with teammates. Lewandowski holds the record for the most goals scored by a foreign player in a single season. Also, he is the only player to make four goals in a Champions League quarter-final match. He has also scored over 300 career goals for the club and country. Lewandowski has also set several records in the Bundesliga. There are as follows.

Kevin De Bruyne is a professional footballer from Belgium who plays as a midfielder for the English Premier League club Manchester City and the Belgium national football team. In August 2015, he joined Manchester City for a club-record fee of £55 million. In his second season at Manchester City, he played a key role in their 2017–18 league title win. He also is known for his elegance on the ball, vision, passing, and ability to strike long-range goals. Furthermore, Sir Alex Ferguson, former Manchester United manager, described him as the most complete player in football. His career records include,

Lionel Andres “Leo” Messi is an Argentine professional footballer who plays forward for the Ligue 1 club PSG and the Argentina national team. Messi has won a record six Ballon d’Or awards, four of which he won consecutively. Also, a record six European Golden Shoes. He has spent most of his professional career with Barcelona. Furthermore, he has won 32 trophies, including nine La Liga titles, four UEFA Champions League titles, and six Copa del Rey titles. Both a prolific goal-scorer and a creative playmaker, Messi holds the records for most official goals scored in La Liga (433), a La Liga season (50), a calendar year (91), and El Clasico (26). Messi also holds a record for most hat-tricks in the UEFA Champions League (8). He scored over 700 goals in his senior career for the club and his country. He currently plays for Paris Saint-Germain F.C.

Neymar is a Brazilian professional footballer who plays forward for the French club Paris Saint-Germain and the Brazil national team. He made his professional debut at Santos when he was 17. Neymar Jr was the South American Footballer of the Year twice. He also won the continental treble of La Liga, the Copa del Rey, and the UEFA Champions League. He then came forth for the FIFA Ballon d’Or in 2015 for his performances. In August 2017, Neymar transferred from Barcelona to Paris Saint-Germain in a transaction worth €222 million (approximately US$262 million), making him the most expensive player ever and breaking Kylian Mbapp’s record.

We hope you enjoyed our article on the most skilled footballers in the world. Please share your thoughts in the comments section below. The source for the data of this article is Wikipedia. This page’s content is subject to change at any time. However, our website(www.footballtipmaster.com) makes no guarantees about the information’s accuracy.