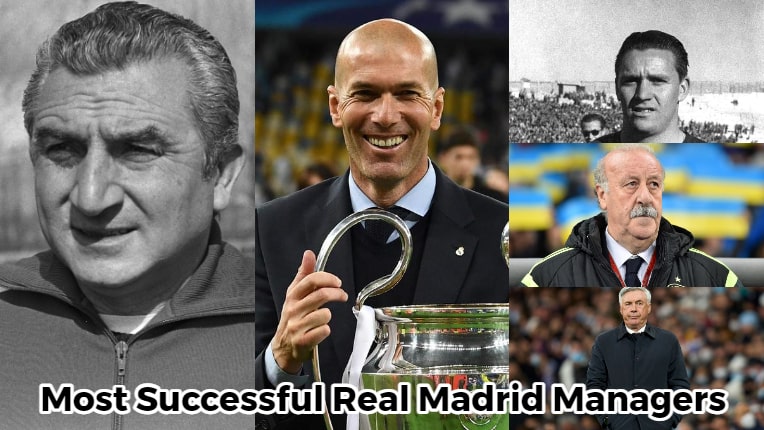 It is not enough for the best football (soccer) players to be talented unless they are also managed well. As a result, in this article, we’ve listed the top ten greatest Real Madrid managers in club history.

Arthur Johnson was Real Madrid’s first full-time manager. Adolfo Melendez, one of Real Madrid’s founders and then director, signed him and he coached the team for ten seasons, winning one Spanish Cup. Carlo Ancelotti is currently in his second season as manager of Real Madrid. From 1910, when the first professional manager was appointed, to the present. This top ten list includes all of Real Madrid’s most successful managers in terms of most trophies won.

1. Miguel Munoz is the most successful Real Madrid managers with 14 Honours

Miguel Munoz, a charismatic midfielder, spent ten years with the Whites. During the 1950s, he was captain and a true benchmark for the team. He gave everything to the club as a player and manager, allowing him to win five European Cups in these two eras. He began his career in Madrid before moving on to Logrones, Racing Santander, and Celta Vigo. Miguel Munoz and Pahino had a fantastic season with Galicia, which culminated in the two players joining the Whites in 1948. The team went through a transitional period, acquiring players who propelled it to the top of Spanish football. In the 1953-54 season, he won his first La Liga title.

Zidane’s sparkling dynasty as a player was converted into a magnificent legacy as a coach, making him the only Real Madrid coach to win three Champions League titles with the club. He was a winner on and off the field, lifting a trophy every 19 games on average, having won two-thirds of the games he oversaw. When Zinedine Zidane unexpectedly left the Estadio Santiago Bernabeu in 2018, he stunned the club. His absence was so felt that he returned only 10 months and two coaches later. His second stint wasn’t quite as successful, as he left in May 2021 after a trophyless season, but his position as the captain of one of the team’s most decorated squads was settled.

Domestically, he was forced to settle for only one league title per spell in charge, and he was always critical of the difficulty of the competition. Zizou announced his retirement from football after appearing in the 2006 World Cup final in Germany. Real Madrid was his final club, with whom he won six titles. The French genius has remained close to the club, serving as a presidential adviser, assistant first team manager, Castilla manager, and now first team manager. Zinedine Zidane won the FIFA Men’s Coach of the Year award in 2017. Between 11 March 2019 and May 2021, he served as Real Madrid’s manager for the second time. Overall, Zidane won 11 trophies as Real Madrid’s manager, averaging one trophy every 19 games.

Read also: The Greatest French Football Players Of All Time

Luis Molowny was a midfielder and coach in Spanish football. During his 12 seasons with Real Madrid and Las Palmas, he played 175 games and scored 90 goals in La Liga. He later became a manager for both clubs, winning 12 major titles with the former in both capacities. While Molowny’s playing career was spectacular, his managerial career was nothing short of spectacular. His coaching reflected his intelligence on the field. Taking over the team was not an easy task. He had to replace none other than Miguel Muoz, the Whites’ most decorated manager. Molowny’s first five months on the job were a huge success, and he won the Copa del Rey in 1974. He had made a strong start, but with the arrival of Miljan Miljanic at the end of the season, he was demoted to the reserves.

He took over for the Yugoslavian in September 1977 and led the team for two seasons. As a result, he won two more league championships. A year later, after a brief stint with the club, Boskov was recalled, and he won the Copa del Rey on the final day of the 1981-1982 season. His final contribution to Real Madrid came when he took over for Amancio (April 1985). He finished that season and the following one with a bang, winning one league title, one Copa de la Liga, and two UEFA Cups.

Vicente del Bosque is a former player and retired Spanish football manager. He is regarded as one of the greatest managers of all time, having won the World Cup, the Champions League, the European Championship, and the Intercontinental Cup. He began his career at his hometown club Salmantino before being signed by Real Madrid. Two seasons later, he had broken into the first team, but the club had other plans for the young Del Bosque: he would be loaned out to gain more experience. He spent his first loan season with Castellon, where he suffered several injuries. He played for Cordoba and then Castellon in the following seasons. During this time, he advanced so much that Real Madrid called him up to the first team.

Real Madrid CF won seven trophies under Vicente del Bosque, including two Champions League Finals in 2000 and 2002, an achievement only rivaled by the great Madrid teams of the 1950s and 1960s. He began training the club’s youth teams at various levels, and in 1994 he took over as caretaker manager of the first team, a role he resumed in 1996. Three years later, he was promoted to the first team coach, a position he held for four seasons, his third and final stint at the club, during which he led the team to the top of the league.

After leaving Real Madrid, he tried something new at Besiktas in Turkey before taking over as coach of the Spanish national team. His work with the national team has resulted in nothing but success, including the European Championship and Spain’s first World Cup, establishing him as one of the world’s greatest coaches.

Carlo Ancelotti is the manager of La Liga club Real Madrid and an Italian professional football manager and former player. He is the most successful Real Madrid manager. Carlo Ancelotti, born in 1959 in Reggiolo, Italy, has established a reputation as one of the world’s best soccer managers. In his long career, he has managed many soccer clubs, including Chelsea, A.C. Milan, and Parma, and he is currently managing Real Madrid players. Carlo Ancelotti was a professional soccer player who represented Italy from 1981 to 1991 before becoming a manager. Ancelotti has won several titles with his vision and tactics, including three UEFA Champions League trophies and two FIFA Club World Cups.

Carlo Ancelotti decided to become a coach after retiring. Between 1992 and 1995, he was the assistant manager of the Italian national team before moving to Reggiana. Later, Ancelotti returned to his former club Parma, but faced several management challenges and was eventually fired in 1998. He became manager of Juventus in 1999 and led the team to 63 wins and 33 draws during his tenure. He later joined AC Milan in 2001. AC Milan won several titles under his management, including the Champions League, the UEFA Super Cup, and the Coppa Italia. Carlo Ancelotti went on to manage Chelsea, Paris Saint-Germain, Real Madrid, Bayern Munich, Napoli, and Everton before returning to Real Madrid in 2021.

We hope you enjoyed our article on the list of the top 10 most successful Real Madrid managers with the most trophies in club history. Please drop your opinions in the comment box. Wikipedia provided the information for the article on the most successful Real Madrid managers. Our website makes no guarantees about the accuracy of the information because it is subject to change.