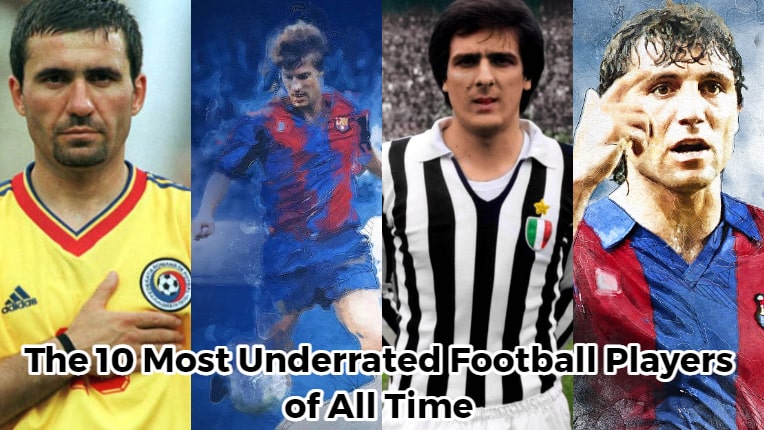 In football most overrated means that the players are receiving more attention than they deserve. Underrated is usually associated with a positive sense. Some footballers who fall into this category are frequently outranked by fans. We are always familiar with the everyday football players but fail to recognize some of the more well-known ones among us. You must understand undervalued football players because you will not know how valuable they are unless you learn about them. We’ve listed those top 10 most underrated footballers in this article. Here’s a list of who are the most underrated football players of all time?

The majority of the most undertated football players on this list are retired professionals from the modern era. There aren’t many current footballers on the list because they might not get the recognition they deserve. The players listed here may be relatively unknown, underappreciated, or underrated in comparison to most football underrated football players elite lists.

Gheorghe Hagi is named “The Maradona of the Carpathians” by the media and fans. He is one of the greatest Romanian footballer of all time. He was the first Romanian to play for European powerhouses Real Madrid, Barcelona, and Galatasaray. Romanian football player Gheorghe Hagi can score from any place on the field. But Hagi was more than just a good shooter; he was also a skilled dribbler and passer who could hold his own against the best in the league. People who think he is a one-dimensional player typically ignore him in the greatest player rankings due to his exceptional shooting skills. Instead, it is what sets him apart from his rivals.

Gheorghe Hagi is a midfielder who played 638 games and scored 271 goals. He won the UEFA Cup as well as seven league titles. The Maradona of the Carpathians ought to be near the top of every list of the finest players, yet occasionally he falls outside the top 10.

Michael Laudrup is a former footballer and current professional football coach from Denmark. He is one of the best players in history. He is Brian Laudrup’s older brother, a retired football player. Michael Laudrup was ranked as the fifth-best player in history by Romario. Although Beckenbauer compared him to Pele, Maradona, and Johan Cruyff, how many modern-day supporters are familiar with him? Laudrup was probably the best playmaker in history.

He had great technique and passing skills, as well as vision and tactical thought. He was undoubtedly a more talented player than Zidane as a result. Zidane’s ability to give it his all and play at his best on the biggest platforms is what made him a great athlete. Laudrup is accused of not always giving his all on the field and of not always reproducing his brilliance. Michael Laudrup won seven league championships and the European Cup. He still managed 197 goals in 697 games while being one of the greatest assist producers of all time.

One of the best defenders in football history is the late Italian Gaetano Scirea. Scirea is one of the five players in the annals of European football to have triumphed in every major international competition for teams that are affiliated with UEFA and FIFA. Scirea won a World Championship with the 1982 FIFA World Cup-winning team, which defeated Brazil 3-2 in a pivotal second-round encounter and Germany 3-1 in the championship game. He also represented Italy in two other World Cups, placing fourth in 1978 and finishing fourth in 1980’s UEFA Euro.

He appeared in 397 games overall in Serie A and scored 24 goals. With Juventus, Scirea enjoyed remarkable success while sharing the field with players like Claudio Gentile, Antonio Cabrini, and goalie Dino Zoff. Gaetano Scirea was a reserved and subdued person on the field. During his football playing career, he never got a red card. He might have received less attention than he deserved because of his character. Scirea, who was 36, unfortunately, passed away in a car accident.

Hristo Stoichkov was one of the best footballer in the 1990s. He is famous for his fierce competitiveness. He is one of the greatest Bulgarian player of all time. The most successful ever soccer player from Bulgaria is Hristo Stoichkov. Hristo Stoichkov was a World Cup star in 1994 when he led an unknown Bulgarian team to fourth place and finished top scorer with six goals. He made his professional football debut with CSKA Sofia. Later he was noticed by FC Barcelona, a major player in Europe. Stoichkov retired from internationals in 1999, having scored 37 goals in 83 games. Stoichkov led Barcelona to four consecutive La Liga titles while playing alongside Romario and the other members of the “Dream Team.”

Many football fans from the 1990s remember Stoichkov with deep affection. He was an excellent crosser of the ball as well as a prolific free-kick taker. He won one European Cup and eight league titles while scoring 350 goals in 677 games.

Matthias Sammer is a former football player and coach from Germany who most recently served as the sporting director of Bayern Munich. He began his career as a defensive midfielder and later as a centre-back. Sammer named German Footballer of the Year in 1995 and 1996, as well as European Footballer of the Year in 1996, becoming the first defender to win the Ballon d’Or since Franz Beckenbauer in 1976.

Matthias Sammer, as an exceptional strategist, leader, and ball-winner, could up the tempo when needed and drive his team to victory. Being better than Matthaus, the last appears to be remembered more for his World Cup victory in 1990. In addition to the 1996 Euros, Sammer led an underdog Borussia Dortmund team to the 1997 Champions League. He also won two league championships, but his career was short due to injury.

Davor Suker is the most underrated footballer of all time. Suker won the Golden Boot as the tournament’s leading scorer, as well as the Silver Ball as the World Cup’s second-best player, trailing only Brazil’s Cristiano Ronaldo. Suker played for Croatia in their futile attempt to qualify for the Euro 2000 after the 1998 World Cup. Before their semi-final loss to eventual champions France, Croatia had not lost a single match in which Suker scored. Suker was Croatia’s Golden Player for UEFA’s Jubilee celebrations in 2003. He finished third in the FIFA World Player of the Year awards in 1998.

He is also the only Croatian on the FIFA 100 list of great footballers. Suker is also Croatia’s all-time leading scorer, with 45 goals. Suker led the national team to third place in the 1998 World Cup, a remarkable achievement for a country. He was also the competition’s top scorer. During his club career, Suker scored 203 goals in 448 games. With Real Madrid, he won a European Cup and a league title.

Gunter Netzer is a former German football player and executive. He had great success in Germany with Borussia Monchengladbach in the early 1970s and with Real Madrid after moving to Spain in 1973. Gunter Netzer was a playmaker and is regarded as one of the best midfielders of all time, attracting attention with his long passes and pushes from deep within his half of the field. Aside from his superior ball skills, his natural authority made him the undisputed leader of his team.

Germany won the slightly less prestigious 1972 European Championships before winning the 1974 World Cup. Gunter Netzer was an essential member of this team. He was a fantastic passer of the ball and, like many of today’s great players, he retreated to his half to seize possession. He was the central hub of the team, similar to Barcelona’s Xavi, but he combined this with excellent dribbling ability and strong leadership. Netzer won two league titles with Borussia Monchengladbach, competing against Beckenbauer’s Bayern Munich. Real Madrid signed him to counter Barcelona’s signing of Johan Cruyff, and he delivered two league titles against supposedly better players.

Ronald Koeman is the Netherlands’ most underappreciated football player. His managerial career also included stops at Valencia in Spain, Benfica in Portugal, and the Netherlands and Barcelona as assistant managers. He is the only manager to have played for and coached the “big three” clubs in the Netherlands, Ajax, PSV, and Feyenoord. Koeman is one of the best and most productive attacking central defenders of all time due to his eye for goal. He had his long-distance passing as well as his accuracy and power when shooting from a distance, particularly on free kicks; he is the world’s top-scoring defender. So far, Koeman has proven to be a particularly adaptable manager. His approach is determined by the abilities of the players at his disposal.

Because of his strength and intelligence, Koeman was an exceptional central defender. However, like the other greats in his position, he was a masterful footballer as well. His passing ability rivaled that of some of the best playmakers in the world, and he used it to even greater effect with his free-kick taking. He may be the highest-scoring defender of all time, with 227 goals in 652 games. He was the leading scorer in the European Cup in 1994. (now the Champions League). During his club career, he won another European Cup and eight league titles.

Andrea Pirlo is one of the best deep-lying playmakers of all time. Pirlo is famous for his vision, ball control, technique, creativity, passing, and free-kick ability. Pirlo began his club career in 1995 as an attacking midfielder with Brescia, where he won the Serie B title in 1997. Andrea Pirlo was named to the 2014-15 UEFA Champions League Season Squad for his efforts. In total, he appeared in 164 games for Juventus in all competitions, scoring 19 goals (15 of which were free-kicks) and assisting 39 times; 31 of his goals came in Serie A, from 119 appearances. Andrea Pirlo won the World Cup with Italy in 2006, as well as two Champions Leagues and six league titles with Milan and Juventus.

Gabriel Batistuta is the only player in World Cup history to have scored two hat-tricks. He won two consecutive Copa America titles with Argentina (1991 and 1993), the CONMEBOL-UEFA Cup of Champions in 1993, and the FIFA Confederations Cup in 1992. Gabriel Batistuta was an Argentine football (soccer) player whose prolific scoring made him a legend in both the Italian Serie A league and the Argentine national team. He could score from almost anywhere on the pitch, and his power and ferocity allowed him to fully exploit this ability. He earned the nickname “Batigol” after scoring 300 goals in 494 competitive appearances. Gabriel Batistuta, with 54 goals from 77 games, was Argentina’s all-time leading goalscorer until Lionel Messi surpassed him in 2016..