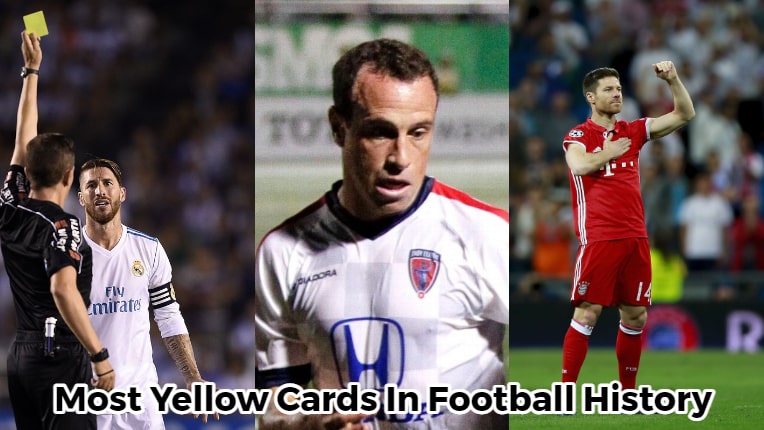 Yellow cards are accidental things of modern football, with some players becoming intimately acquainted with the referee’s notebook. It is customary for every player to receive a yellow card several times during their career, and some players receive them just for fun. Many times throughout football history, players have received yellow cards on multiple occasions for minor infractions or misbehaving with the referee.

The referee displays a yellow card to indicate that a player has been officially cautioned. The player may continue to play; however, if they receive a second caution in a match, they are sent off by showing the yellow card again, followed by a red card! Football is a highly emotional sport, and as a result, players frequently lose control and commit fouls that endanger others on the field of play.

Yellow cards were first used in the 1970 World Cup, which took place half a century ago. Red cards are issued to players for tactical fouls, dissent, or, more recently, simulation. A yellow card is not the worst thing that can happen, but it is enough to warn any player that if he is sent off, the team will lose the match. No player has been spared from receiving yellow cards, but some are simply prone to receiving yellow cards without doing anything. Let’s take a look at the top five soccer players in history who have received the most yellow cards.

Top 5 Players With Most Yellow Cards In Football History | Who has the most yellow cards in soccer history?

Top 5 Soccer Players: Who have received the most yellow cards in football history?

1. Sergio Ramos holds the record for the most yellow cards in football history, With 262 Yellow Cards

Sergio Ramos, the Greatest Defender in Football History, has to be at the top of this list. He is a Spanish professional footballer who plays for Ligue 1 club Paris Saint-Germain as well as the Spain national team. He was a centre-back for Real Madrid for 16 years, and he has captained the club for six of those years. Sergio Ramos is the type of player who gives his all on the field and is willing to die to safeguard his crown. In his long career with Real Madrid and now PSG, the player has received a total of 262 yellow cards.

He received double yellow cards twice and was sent off in the 85th minute of the game. And despite having the most yellow cards and the most red-carded (27 RC) player at the club level in the 21st century. Sergio Ramos was sent off for the 27th time in his career as PSG were held to a 1-1 draw by Lorient in the final Ligue 1 match of 2021. He is still loved and respected by millions of fans for his career. Sergio Ramos also holds the record for most international victories for Spain, with 131 wins. No other soccer player will ever be able to break Sergio Ramos’ record.

Gerardo Torrado, a legendary Mexican midfielder with a 20-year career, played his final match on Sunday. He spent more than a decade with Cruz Azul, making 325 appearances. He appeared 146 times for Mexico’s national team, trailing only Claudio Suarez in all-time El Tri appearances. Gerardo quickly established himself as one of the team’s most important players. Torrado, an aggressive midfielder, has received numerous red and yellow cards during his career. Gerardo has captained the team since 2006 and has led them to three league finals and a CONCACAF Champions League final in 2009. In 2014, he became CONCACAF champion for the first time in his career with Cruz Azul. Gerardo Torrado is a second soccer player who has received 228 yellow cards and has many memories from his career.

Gerardo Torrado announced his retirement from the game he has played professionally since 1997 after his final match with Indy Eleven of the NASL, for whom he spent the final two seasons of his career. Torrado will now begin a new career as the Mexican Football Federation’s sporting director.

Alves, one of the greatest full-backs of all time, is the most decorated player in football history when all of his honors at the club level football and with the Brazilian national team are added up. Throughout his career, he has won 46 trophies in football history at the senior level and 47 official titles overall. He became the oldest footballer in history to win a medal in the men’s Olympic football tournament at the age of 38. Throughout his long career, he had pocketed many great players, which occasionally resulted in him receiving a yellow card. Alves is back in Camp Nou for his final dance, and he could add more titles to his already lengthy resume.

Alves returned to FC Barcelona in December 2021 after leaving PSG, but his playing time has been limited, with him mostly appearing in cup matches. The Brazilian is missing because the Catalan giants are only allowed to sign three new players, with Xavi preferring Torres, Traore, and Aubameyang.

Xabi Alonso, born November 25, 1981, is a Spanish soccer player. Alonso has played for Real Sociedad, Liverpool, Real Madrid, and Bayern Munich. Xabi Alonso is widely regarded as one of the best midfielders of his generation. Alonso was appointed manager of Real Sociedad B in Segunda Division B on June 1, 2019, and began his tenure on July 9, 2019. Despite being heavily linked to the soon-to-be-vacant manager role at Borussia Monchengladbach, Alonso signed a one-year extension with the club in March 2021.

With 197 yellow cards, Real Madrid’s mastermind is not expected to be up so high here. It is expected for a player of his caliber to get a few of these, but he appears to have taken his defensive responsibilities seriously, as evidenced by the number of them he received. Xabi Alonso has revealed that he left Real Madrid for Bayern Munich because he was “curious” about Pep Guardiola’s coaching techniques. After five seasons at the Santiago Bernabeu, where he won six major trophies, the 40-year-old switched clubs in 2014.

Daniele Conti is an Italian football manager and former defensive midfielder who played for Cagliari for the majority of his career. It’s impossible to talk about yellow & red cards without bringing up the subject of Italians. Daniele Conti, a Cagliari legend, has 190 yellow cards in his career. By getting down on the ground fearlessly, he has been the backbone of his team, eradicating the majority of the opposition’s attacks. He currently works as a youth team coordinator for the club. He is the younger brother of fellow footballer Andrea Conti and the son of former A.S. Roma and Italy star Bruno Conti.

Who Invented Red And Yellow Cards?

You can’t imagine modern football (soccer) without the yellow and red cards, terms that are now used colloquially. Ken Aston, an Englishman who sadly died in October 2001, “invented” them 52 years ago (as of 2022), has made invaluable contributions to football and, in particular, the art of refereeing. After receiving his second yellow card against West Germany in 1974, Carlos Caszely of Chile became the first person to receive a red card for bringing down Berti Vogts.

If you don’t know when the red and yellow cards were introduced in football here is an answer. If these two colors were used on the football field, they would overcome any language barriers and show players and spectators that they had been warned or sent off. The first use of red and yellow cards occurred during the 1970 World Cup in Mexico. The cards were an instant success.

We hope you enjoyed our article on the most yellow cards in football history. Please drop your opinions in the comment box. The information for this article is acquired from Wikipedia. Since this topic is subject to change, our website provides no guarantee for the accuracy of the information.