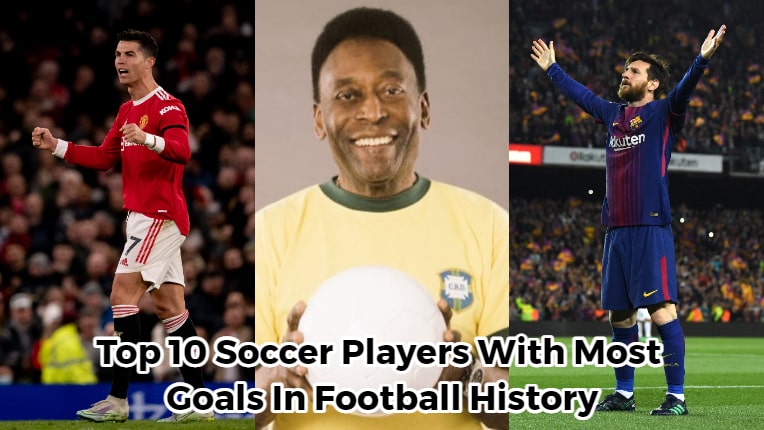 This list of the players with the most career goals in soccer history includes players from the early 1900s to the present. In today’s game, Cristiano Ronaldo and Lionel Messi score at an unprecedented rate, but there are those from history whose rate of scoring was even more impressive.

Brazilian superstar Pele, born Edson Arantes do Nascimento, holds the Guinness World Record for the most goals scored in a given period with 1,281. Pele scored these goals in 1,363 matches between September 7th, 1956, and October 1st, 1977. Pele spent the majority of his career with Santos FC in Brazil, but he also played for the Brazilian national team and the New York Cosmos of the North American Soccer League (NASL).

While this is the official Guinness World Record, the Rec.Sport.Soccer Statistics Foundation (RSSSF), which only documents official games, puts his match total at 765 from 831 games a rate of 0.92 goals per game. However, given the football’s long history, which has seen considerable highest goal scorers across continents and eras, it has been difficult to keep track of every individual’s actual number of goals. This makes a list of the top 10 football players with the most goals.

Also, read- Who is better Messi or Ronaldo?

1. Cristiano Ronaldo holds the record for most goals scored in football with 803 goals.

On December 3, he scored a brace against Arsenal FC, helping Manchester United to a 3-2 victory at Old Trafford. A modern-day legend for Manchester United, Real Madrid, Juventus, and now Manchester United again. Ronaldo has won everything in the game and is still going strong today, adding the biggest record yet to his historic career by surpassing Bican. Cristiano Ronaldo now has an incredible 803 goals, and he is far from finished. Cristiano Ronaldo, football’s all-time leading scorer, has 450 goals for Real Madrid and 101 goals for Juventus before returning to his childhood club in the Premier League. Ronaldo has 115 goals for his national team, and with his longevity, he could easily surpass the 850-goal mark.

2. Pele- 765 Goals Which Is Second Most Goals In Soccer History

Pele, one of the greatest players to ever grace the game of football, was one of the sport’s first superstars, with his displays in Brazil’s iconic yellow shirt. He is one of the few people who became more influential, popular, famous, and legendary after their glory days than during them. He is a hero in every sense of the word: for what he represents and for what he has done, but perhaps even more so for refusing to let hubris get the best of him. At 17 years and 249 days, Pele became the youngest player to play in a World Cup final match. Brazil won the World Cup, and Pele’s first goal was named one of the best in World Cup history. Pele was regarded as the best player in the world when the 1962 World Cup began.

His exploits have led Brazil to World Cup glory three times (1970, 1962, 1958). Pele scored 765 goals in official matches during his career, according to official records.

Lionel Messi is an Argentina national team and Paris Saint-Germain soccer player. He has set goalscoring records and won individual awards on his way to being recognized as one of the best soccer players in the world. Former Barcelona superstar Lionel Messi sits third on the list and given his age, he is more than likely to overtake Pele and challenge his archrival Cristiano Ronaldo for the top position. The southpaw has been one of the most prolific goalscorers of the 21st century, with many regarding him to be the best there has ever been to grace the sport. So far, the Argentine international’s number of international goals has been a constraint. While Lionel Messi has 679 career goals for the club level, he has only 81 for his country.

His career numbers must be seen to be believed. Lionel Messi scored 672 goals in 778 appearances for Barcelona. On top of that, he had 228 assists. Ten domestic championships, four Champions Leagues, seven Ballon d’Or, six European Golden Shoes, and eight European hat-tricks (a joint record with you know who).

He is regarded as one of the greatest players of all time after scoring 753 goals as a prolific striker known for his clinical finishing. Romario was a key figure in Brazil’s World Cup victory in 1994, winning the Golden Ball as the tournament’s best player. During his five seasons at PSV, the club won the Eredivisie three times, and he scored 165 goals in 167 games. He joined FC Barcelona in 1993 and became a member of Johan Cruyff’s “Dream Team,” forming an exceptional strike partnership with Hristo Stoichkov. The retrospective as mentioned above awarding of the Ballon d’Or to include South American players in 2016 credited Romario with the trophy for 1994, but the honor eluded him during his actual playing days.

Romario is widely regarded as one of the most talented and prolific strikers of all time. Johan Cruyff, his coach at Barcelona, described him as a “genius of the goal area” and the most significant player he had ever coached.

Ferenc Puskas was a Hungarian footballer and manager who was widely regarded as one of the best players of all time. At Real Madrid, he left an indelible imprint. Puskas wowed Whites fans with his gentlemanliness, charm, friendliness, and brilliant on-field performances. He broke all goal-scoring records as a forward, earning him the moniker “Pancho” or “Canoncito pum.” Puskas scored 512 goals in 528 appearances for Real Madrid, helping the club win five consecutive league titles (1961–65) and three European Cups. He represented Spain in the 1962 World Cup after becoming a Spanish citizen in 1961, but he failed to score a goal in four matches. Ferenc Puskas scored 729 goals during his career, ranking fifth all-time in soccer history.

We hope you enjoyed our article on the Top 5/10 most goals list in football history. Please drop your thoughts in the comment box. The information for this article is acquired from Wikipedia.com. Since this topic is subject to change, our website (www.footballtipmaster.com) provides no guarantee for the accuracy of the information.