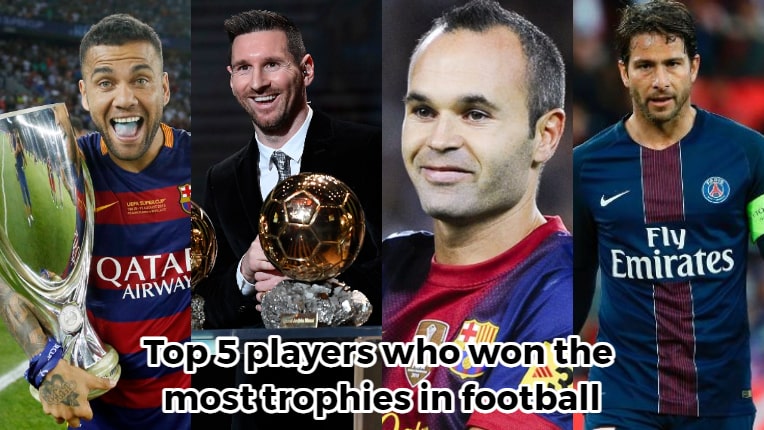 An awards ceremony in football (soccer) gives the impression that the player’s performance is valued. It expresses approval and gratitude for each individual’s excellent performance and informs people that good work will be recognized. It demonstrates to others, such as the general public and other staff members, that you are aware of exceptional accomplishments. The “man of the match” (MOTM) award in soccer is usually given to a player on the winning team. The award is frequently given to players who score a hat trick or goalkeepers who keep a clean sheet under duress. Hat-trick scorers are usually awarded the match ball regardless of whether they are officially named man of the match.

Who is the most decorated player in football history?

Dani Alves is the most decorated player in history, with 47 honors to his name. The 39-year-old full-back has won trophies with Bahia, Sevilla, Barcelona, Juventus, Paris Saint-Germain, and Sao Paulo since 2001.

Dani Alves of Barcelona won 46 titles at the senior level official titles during his career, the most by any player in football history. With his hometown club Bahia, the Brazilian defender won his first professional titles. Dani Alves joined Barcelona for £23 million after winning five trophies in six years with Sevilla. He went on to win 23 titles, including six La Liga titles and three UEFA Champions League titles.

Dani Alves returned to Barcelona for the second time after trophy-laden spells at Juventus (2016-17 – two titles), Paris Saint-Germain (2017-19 – six titles), and Sao Paulo (2019-21 – one trophy). On the international stage, the 39-year-old has twice won the Copa America and Confederation Cup, as well as the gold medal in men’s football at Tokyo 2020. The only trophy missing from his collection is the FIFA World Cup. In terms of club and national titles, he is currently the most ornamented footballer in history.

Lionel Messi is a football (soccer) player from Argentina who currently plays for Paris Saint-Germain. Few players can compete with Messi’s trophy collection. He has set goalscoring records and won individual awards on his way to being recognized as one of the best soccer players in the world. His first trophy was the La Liga title won by Barcelona under manager Frank Rijkaard in 2004-05. In 2005-06, he won his first UEFA Champions League title after Barcelona defeated Arsenal in Paris. Messi is the most decorated player in the Ballon d’Or award’s history. Ten different players have won the trophy more than once, with Messi leading the way with 7 Ballon d’Or. Cristiano Ronaldo is in second place, having won it five times.

Lionel Messi has won 39 trophies in his Football career.

Messi equaled Egyptian midfielder Hossam Ashour’s record of 39 trophies with the Ligue 1 title. On August 20, 2008, Ashour made his senior debut for Egypt in a 4–0 loss to Sudan. In his Al Hyly career (2003-2020), Ashour created 290 apps and won 39 trophies. He holds the record for most awards won while playing for a single club.

Andres Iniesta is a Barcelona legend who has contributed significantly to the club’s success. The elegant midfielder was an important member of the Blaugrana. He also played at the same level for Spain, where he helped them win three major championships in four years. Iniesta was named man of the match in the 2010 FIFA World Cup final against the Netherlands, scoring the game-winning goal. He also received this honor in the EURO 2012 final against Italy. His first trophy was the La Liga title he won with Barcelona in 2004-05. He has four times won the prestigious UEFA Champions Trophy. With 37 major trophies, Iniesta trails former teammates Messi and Dani Alves on our list.

Maxwell is among the few players with numerous club trophies from various leagues. Maxwell’s first major trophy came at the age of 19 when he won the Copa do Brasil with Cruzeiro. In the years since, he has won four more major trophies, this time with Eredivisie giants Ajax. Maxwell and Andres Iniesta are tied for the fourth-most trophies won by a player in football history. The pair, who were teammates at Barcelona, each have 37 trophies. Maxwell has played for six different teams in five different leagues. The Brazilian full-back has previously played for Ajax, Inter Milan, Paris Saint-Germain, and Barcelona. Maxwell arrived at the San Siro after a successful season with Ajax, where he won three Scudetto and two Copa Italianas. With PSG, the 2011 Champions League winner with Barcelona won the most major trophies of his career.

How many trophies has Ronaldo won in his career?

Is Portugal in the World Cup?

Portugal will compete in its sixth World Cup in a row, with captain Cristiano Ronaldo making his fifth appearance.

How many trophies has Neymar won in his career?

Neymar has won 28 titles, 21 of which have come in Europe and one with the Selecao (Confederations Cup 2013). However, Neymar was injured and missed Brazil’s triumphant 2019 Copa America campaign.

How many trophies has Neymar won at Santos?

How many trophies has Neymar won at Barcelona?

How many trophies has Neymar won at PSG?

How many trophies has Neymar won with Brazil?

Also, read- Who Are The Most Famous Soccer Players In MLS History

We hope you enjoyed our article on the List Of Most Trophies Won By A Football Player. Please drop your opinions in the comment box. The information for this article is acquired from Wikipedia. Since this topic is subject to change, our website provides no guarantee for the accuracy of the information.