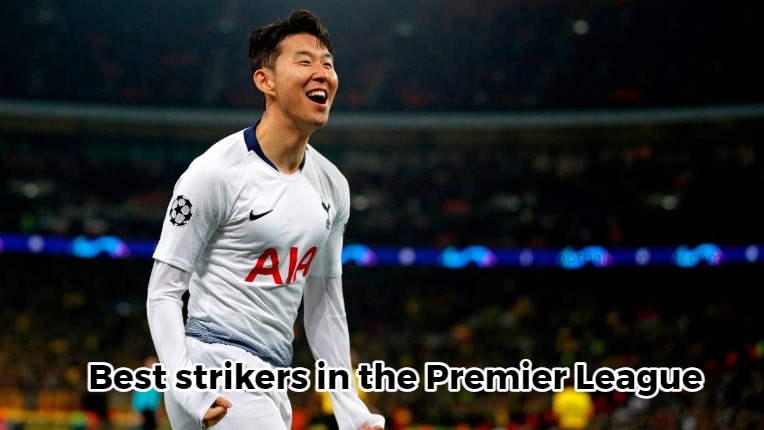 This article contains the list of best strikers in the Premier League. We compiled this list after going through their Premier League stats and fan opinions. Harry Kane is the best striker in Premier League as of now. Lastly, we have also included some of their achievements and interesting facts about their carrier.

In football, the player positioned closest to the opponent’s goalpost is called a striker. Firstly, the role of the striker is to score goals and create an opening for other players of his team. Strikers have minimum responsibility on defense and yet they are defensively very active during the games. The striker must possess really good footwork and strong ball-handling skills. They should be quick enough to outrun the defenders, break free and score. It is one of the most difficult roles to play in football.

Harry Kane(born on 28th July 1993) is a striker for Tottenham Hotspur. He is the captain of the England national football team. He is in 7th place for the highest goals scored in Premier League with 171 goals and the best striker in the Premier League. His career started with the Tottenham youth academy. Soon at the age of 16, he made it to the senior team in 2009. In his first full season, he was the Premier League’s second-highest goal scorer and was named the PFA young player of the year. He was the top scorer in the 2015-16 and 2016-17 seasons and won the PFA fans player of the year award. His career-best was 41 goals in the 2017-18 season. He is Tottenham’s second-highest goalscorer of all time.

Since the 2014-15 season, he is the highest scorer for Tottenham. He was at the top of the list for goals and assists in the 2020-21 season. He was the England team’s captain for the FIFA world cup 2018 and became the highest scorer to receive the golden boot. Moreover, under his leadership, England finished fourth in FIFA 2018. He was also the Premier League’s playmaker of the season in the 2020-21 season.

Salah Hamed Mahrous Ghaly(born on 15th June 1992) is a forward who plays for Liverpool. He is an Egyptian professional footballer and captain of the Egyptian national football team. Above all, he is mainly known for his speed and finishing. Initially, In 2010, he started his senior career. Later, in 2014, he joined Chelsea with an €11 million contract. Finally, in 2017, he signed a contract of €36.9 million which was the club’s record at that time. Salah is the all-time most expensive Egyptian player.

With Liverpool, Salah won the Premier League, the UEFA Champions League. He won the Premier League golden boot twice. He is Liverpool’s 10th all-time highest scorer. Salah represented Egypt at the youth level before his senior debut. When Egypt qualified for the 2018 FIFA world cup, he was the top scorer in the CAF qualifications. He was the CAF African footballer of the year in 2017-18, BBC African footballer of the year 2017-18. In Nagrig, his hometown, 65% of the people live in poverty. He donated money to build a hospital and a school there. Mohamed Salah helped a lot of poor families and the government during the economic crisis.

The English footballer Jamie Richard Vardy(born on 11 January 1987) is Leicester City’s striker. Subsequently, he is also a member of the England national team. At the age of 16, he began his senior career with Stockbridge Park Steels in 2007. Initially, in his first season, he scored 25 goals and won the club’s Player of the Year award. In 2007, he joined Fleetwood Town and scored 31 goals in his first season with them and won the team’s Player of the Year award. He was the Premier League’s Player of the season in 2015-16 Premier League and broke a record by winning 11 consecutive matches in the Premier League. He also won the FWA footballer of the year award. Lastly, in the 2019-20 season, Vardy won the Premier League golden boot to become the oldest player to win the golden boot in football history.

The captain of the South Korean national team Son Heung-min was born on 8 July 1992 and plays in the Premier League for Tottenham Hotspur. He is known as the best winger in the world and the all-time best Asian footballer in the world. He is the first Asian player in the Premier League history to score more than 50 goals. Also, Son Heung-min was nominated for the Balon d’Or in 2019.

Initially, In 2010, he debuted in the Bundesliga. He joined Bayer Leverkusen for €10 million which was a club record. Later on, he joined Tottenham Hotspur for €22 million. He is the most expensive Asian footballer in the world. In addition, he is also the top Asian goal scorer in the Premier League and Champions League. Son Heung-min is the second Asian to play in the UEFA champions league finals. He played in the 2014 and 2018 football world cups for South Korea. Furthermore, his team also won the football gold medal in the 2018 Asian Games.

We hope you enjoyed our article on Best Strikers in Premier League. Please share your thoughts in the comments section below. The source for the data of this article is Wikipedia. Also, this page’s content is subject to change at any time. Our website (www.footballtipmaster.com) makes no guarantees about the information’s accuracy.