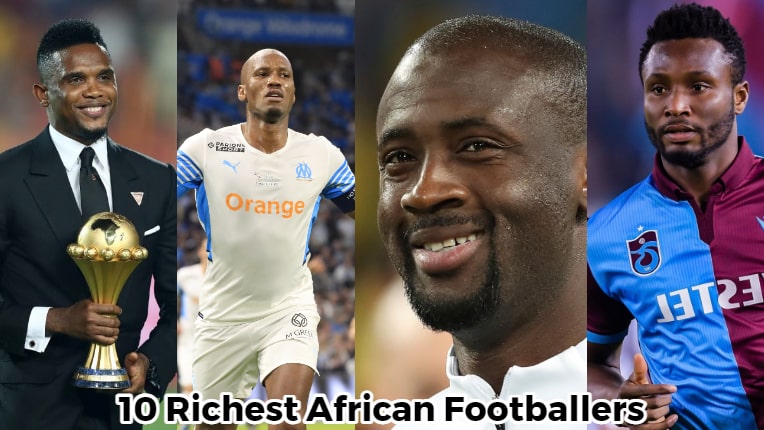 Do you want to know who the richest African football players are? Then you’ve chosen the correct website and article. Africa is a vast continent brimming with resources. Several Africans with exceptional talent and skill compete on the world stage in a variety of sports. Samuel Eto’o is still the wealthiest African footballer of all time. Eto’o and his Ivorian counterpart Drogba have once again topped the list. Let’s take a look at the richest African soccer players in 2022.

Football, also known as Soccer, originated in Africa in the 1800s. Without a doubt, it is the most popular sport in the majority of African countries. Rugby, cricket, and basketball are close behind. South Africa was also the first African country to host a FIFA World Cup, in 2010. The Confederation of African Football (CAF) is the governing body of African football, in charge of administering and controlling continental, national, and club competitions. It is also the largest of FIFA’s six confederations. As a result, it is not surprising that some of the world’s greatest footballers are African.

African footballers are among the highest-paid players in the world. When discussing the top ten richest African footballers and their net worth, it is important to note that their salaries from games, prize money, and endorsement deals go millions of dollars. Who are Africa’s wealthiest footballers? Here is an exhaustive list.

1. Samuel Eto’o- The Richest African Football Players With a $95 million Net worth

I am pleased to inform you that Samuel Eto’o is once again Africa’s richest footballer. Everyone agrees that Samuel Eto’o is the biggest star in Africa right now. Samuel Eto’o, a striker, joined the Kadji Sports Academy when he was 11 years old. He trained there from 1992 to 1996, then moved to a French soccer club but was turned down due to his youth and lack of proper identification.

He never gave up hope and joined Real Madrid the following year, where he finished his young career. Madrid was his first club (1997-2000), but he was later loaned to several others. He has represented 11 different clubs as well as the Cameroonian National Team. Real Madrid, Espanyol, Leganes, Mallorca, Barcelona, Inter Milan, Chelsea, Anzhi Makhachkala, Everton, Sampdoria, and Antalyaspor are among the clubs. His estimated net worth is $95 million, making him one of the world’s wealthiest footballers. Eto’o drives the world’s most expensive car, a Bugatti Veyron, and is the only African footballer to do so. There is a Ferrari, a Bentley, a Lamborghini, a Hummer jeep, a Porch, and a family bus among the fleet. He does not buy the wheels just for himself; almost every member of his nuclear family rides in something large!

Drogba is extremely wealthy, ranking second on our list of the top ten richest footballers in Africa, with an estimated net worth of $90 million. He is a former captain of the Ivory Coast football team and an Ivorian footballer. Drogba, who has played as a striker throughout his football career, has a net worth of $90 million. Drogba made his professional debut at the age of 18, but he is best known for his contributions to Premier League club Chelsea. In his first season with the club, he led them to their first league championship in 50 years.

He was the first African footballer to score 100 Premier League goals and was twice named African Football Player of the Year. With a career record of 10 goals in 10 finals and 10 club championships, he is known as “The African King.”

He possessed talent, deception, confidence, and technique. He is regarded as one of the greatest African footballers in history. Drogba has collaborated with some of the world’s most recognizable brands, including Samsung, Pepsi, Adidas, Nike, and Konami. Didier Drogba captained the Ivory Coast national team from 2006 until he retired from the national team in 2014. He was the Ivory Coast national team’s all-time leading goal scorer during his time there. He played for Chelsea FC, one of the world’s ten richest soccer clubs, near the end of his career.

He won four Premier League titles, four FA Cups, three League Cups, and the Champions League in the most dramatic and glorious of circumstances. He was named Chelsea’s and the Players’ Player of the Year, and he twice won the Premier League Golden Boot.

Yaya Toure, the Ivorian midfielder, has a net worth of $70 million. Toure played center-back for Barcelona between 2007 and 2009, but he has won the majority of his awards for being the world’s best midfielder. In 2010, he joined Manchester City and helped them win their first Premier League title in 44 years. Yaya Toure is widely regarded as one of the world’s best players in his position, as well as one of Africa’s greatest and wealthiest footballers. Yaya Touré has been named African Footballer of the Year in 2011, 2012, 2013, and 2014. Manchester paid him £250,000 per week, and his endorsements netted him $21.7 million. Forbes estimates his investment to be $46.4 million, and his net worth to be $70 million, making him one of Africa’s richest footballers.

Yaya Toure has always been a fan of expensive cars and mansions. He previously owned a Porsche 911, a Mercedes Benz, a Bentley Continental GT, and a Porsche Cayenne. This wealthy African footballer recently purchased a lavish Rolls Royce Phantom worth £350,000.

John Mikel Obi, the fourth wealthiest African footballer, is extremely wealthy and currently ranks fourth on our list of the top ten richest footballers in Africa, with an estimated net worth of $60 million. While this professional footballer is no longer active, he has represented Nigeria in numerous championships. He has 18 years of experience as a defensive midfielder for top clubs and international teams. Mikel’s career began when he was 12 years old when he was chosen to play for the Pepsi football academy. He has played for Chelsea for 11 years and has represented Nigeria in 91 matches. Mikel is currently a free agent with a market value of $700,000.

He was born John Michael Nchekwube Obinna, but due to a spelling error in his name submitted to FIFA by the Nigerian Football Association in 2013 for a tournament in Finland, his name was changed to “Mikel,” which he has since kept. He is without a doubt one of Africa’s wealthiest footballers, having played for the top English Premier League club Chelsea as well as Lyn Oslo in Norway. His weekly salary at Tianjin Teda was 140 thousand pounds. Mikel Obi’s home and vehicles are both impressive and expensive. He also owns extremely expensive vehicles such as the Bentley Continental GT (about 3.5 million), the expensive Mercedes G Wagon (8.1 million), the luxurious Range Rover Sport (4.3 million), and the Black Mercedes G 500.

Keita made his Ligue 1 debut for L’OM on September 19, 1999, in a 1–0 home win over Troyes AC, and went on to play three games in the UEFA Champions League that season. He left the Stade Velodrome in the summer of 2000. He joined the Chinese Super League club FC Dalian Aerbin in 2012, where he earns €14 million per year. Seydou Keita has many mansions, expensive cars worth millions of dollars, and other assets. Seydou Keita spent his senior career with famous clubs like Barcelona, and El Jaish.

Also, read- List Of Most Trophies Won By A Football Player

We hope you enjoyed our article on the top 10 richest African football players. Please drop your opinions in the comment box. The information for this article is acquired from Wikipedia. Since this topic is subject to change, our website provides no guarantee for the accuracy of the information.