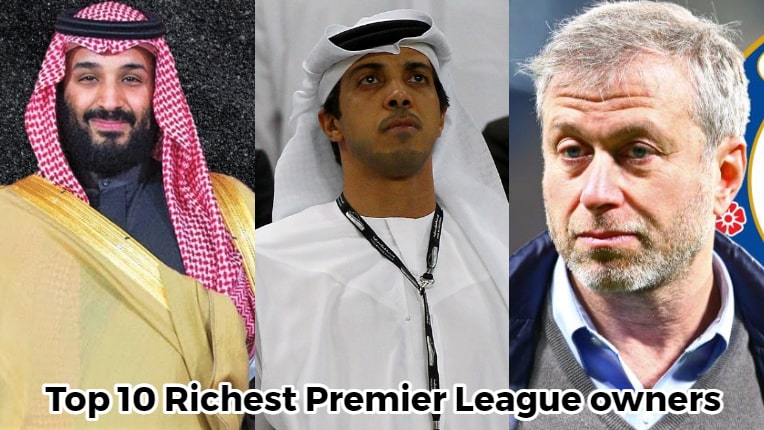 The majority of owners of the richest club owners in the world are billionaire businessmen from the United States, China, the Middle East (Dubai), and Russia. English Premier League clubs owners are the most richest in the world. In 2022, the takeover of Newcastle Football Club by the richest club owners in the world was worth more than 20 times that of Manchester City. Manchester United earned $671 million in revenue from commercial sales, match-day sales, and broadcast revenue in 2021-22.

As a result, Manchester United will be England’s richest football club in 2022. Before the Magpies took over, the city’s owners were the most valuable. The wealth of premier league owners are ranked in this article based on total investments in and outside of sports. So, who are the wealthiest owners in the English Premier League?

Aside from the money, football success brings with it status and is a fairly reliable means of eliciting goodwill from the general public. As a result, it’s no surprise that the game has captured the attention of many millionaires and billionaires around the world. The following is a list of the top ten richest club owners in the world rankings for the English Premier League clubs and their net worth:

After acquiring Newcastle United F.C. in 2021, the consortium became the richest club owners in English Premier League. The consortium includes P.C.P. Capital Partners, Reuben Brothers, and the Saudi Public Investment Fund (P.I.F.). The takeover procedure began in April 2020 and ended in October 2021. According to the Sovereign Wealth Fund Institute, the fund’s assets total more than $620 billion. As part of the takeover, RB Sports & Media and P.C.P. Capital Partners each has a 10% stake in Newcastle.

Mansour bin Zayed bin Sultan bin Zayed bin Khalifa Al Nahyan, also known as Sheikh Mansour, was born on November 20, 1970. The billionaire is an Emirati politician who is currently the United Arab Emirates’ deputy prime minister, minister of presidential affairs, and a member of Abu Dhabi’s royal family. He is the brother of the current President of the UAE, Khalifa bin Zayed Al Nahyan, and is married to one of the daughters of Dubai’s ruler, Mohammed bin Rashid Al Maktoum. He owns the Abu Dhabi United Group (ADUG), an investment firm for the Abu Dhabi royal family, which purchased Manchester City Football Club in September 2008. According to sources, Sheikh Mansour is the second richest club owner in the English Premier League. Roughly his net worth in 2022 is expected to be $40 billion.

Roman Arkadyevich Abramovich is a billionaire, oligarch, and politician from Russia. Abramovich made his fortune in the years following the Soviet Union’s demise, acquiring Russian state-owned assets at far below market value prices in Russia’s controversial loans-for-shares privatization program. Abramovich was a close confidante of both former Russian President Boris Yeltsin and current Russian President Vladimir Putin. The billionaire is the owner of the private investment firm Millhouse L.L.C. as well as the premier league club Chelsea F.C. He was ranked 142 on Forbes’ list of the richest club owners in the English Premier League, with a net worth of $14.5 billion.

Enos Stanley Kroenke is an American businessman who was born on July 29, 1947. With an estimated net worth of $10.7 billion, he is one of the richest club owners in the English Premier League. He currently owns Kroenke Sports & Entertainment, the holding company of Arsenal F.C. in the Premier League. Arsenal W.F.C. of the W.S.L., Denver Nuggets of the NBA, Los Angeles Rams of the NFL, Colorado Avalanche of the NHL, Colorado Mammoth of the National Lacrosse League, Colorado Rapids of Major League Soccer, Los Angeles Gladiators of the Overwatch League, and Los Angeles Guerrillas of the Call of Duty League.

Nassef Onsi Sawiris is an Egyptian billionaire businessman who was born on January 19, 1961. He is the youngest of Onsi Sawiris’ three sons (Naguib and Samih). Forbes estimated his net worth to be $7.8 billion, making him the richest Arab and the second richest African. Sawiris took over as chairman of Aston Villa F.C. from Tony Xia in July 2018, after the NSWE purchased a controlling stake in the club. NSWE is owned and controlled by both Sawiris’ group NNS and American billionaire Wes Edens.

The owners of Tottenham Hotspur are Joe Lewis and Daniel Levy. Lewis is the CEO of ENIC International and the Tavistock Group, which has a diverse investment portfolio that includes oil, gas, energy, agriculture, and logistics. Meanwhile, Levy is a co-owner of ENIC International and has made several football investments. The net worth of Premier League owners in 2022 is estimated to be $6 billion.

Josh Harris, born in 1965, is a billionaire American private equity investor and philanthropist. He co-founded Apollo Global Management, one of the world’s most prominent alternative investment firms. Joshua Harris is the principal owner and managing partner of the National Hockey League’s New Jersey Devils and the National Basketball Association’s Philadelphia 76ers. He is also a general partner of Crystal Palace of the English Premier League. In 2022, his net worth was estimated to be around $5.7 billion.

Guangchang Guo is a Chinese businessman with a net worth of $5.1 billion. Guangchang Guo, called “China’s Warren Buffet,” is the co-founder and chairman of Fosun International Limited, the largest privately held conglomerate in Mainland China. The group, headquartered in Shanghai but incorporated in Hong Kong, is involved in pharmaceuticals, real estate, mining, steel, retail, publishing, finance, and asset management. He is the chairman and co-founder of Fosun International Limited. He was valued at $5.1 billion in 2022.

Malcolm Glazer purchased a majority stake in the Premier League giants through his investment company Red Football Ltd in 2005, turning Old Trafford into a success, disappointment, increased debts, and huge revenue generator. He died in May 2014 after a long illness caused by a stroke, and his 90% controlling stake was divided equally among his six children. According to sources, the Glazers are also one of the most despised owners in the Premier League.

Thai businessman Aiyawatt Srivaddhanaprabha was born on July 26, 1985. He is the CEO and Chairman of King Power, Leicester City Football Club, and O.H. Leuven. Following his father’s death, Vichai Srivaddhanaprabha assumed King Power. In October 2018, Forbes magazine ranked him as Thailand’s fifth-richest man, with a reported net worth of $4.9 billion. On Forbes 2020 World’s Billionaires, he was one of the five youngest billionaires in Asia. He also ranks tenth among the richest club owners in English Premier League.

Which English football club has the richest owners? | Richest Premier League owners and their net worth

We hope you enjoyed our article on the top 10 richest club owners in the world. Please leave your thoughts in the comment section. This article information richest premier league owners from Wikipedia. Our website makes no guarantees about the accuracy of the information because it is subject to change.