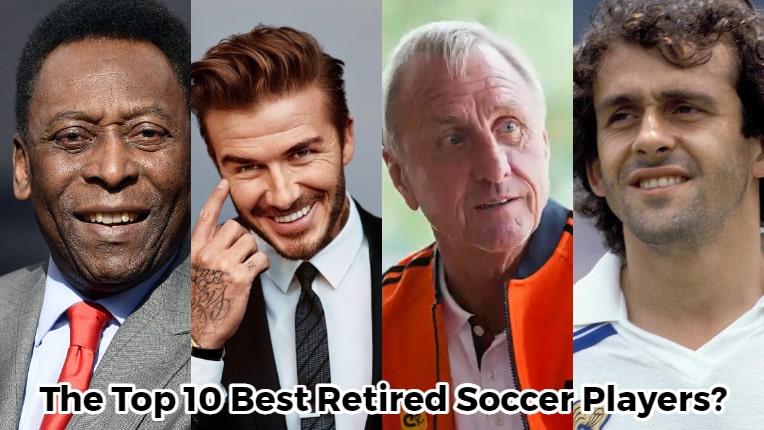 10 Best Retired Soccer Players: When soccer players retire, their number is usually an honor bestowed upon them by their team/club. Football (soccer) players are among the most popular athletes on the planet. However, it is not only that they are loved by the fans that they earn when they spend time on the football field. Footballers earn everyone’s respect, and attention but also money and lifetime fame to be called the greatest player. However, after retirement, this may not always be the case. When you are no longer on the playing field, things change.

Football management and coaching is the most obvious career path for a retired soccer player. Clubs are more concerned with providing their players with skills that they can use to earn a living once they retire, so many retired players begin preparing to be football coaches/managers. Some of the greatest soccer players who played this beautiful game in history have been ranked based on their successful club careers, National team accomplishments, and much more.

All you need to know is those greatest footballers who retired too early as the best and most successful after playing this beautiful game. According to FIFA, this game began in England in 1863. Since then, many of the greatest players have played this game, gaining fame and becoming legendary players. Here’s a list of the top 20 best retired soccer players.

Pele is a former Brazilian footballer who played as a forward. He was one of the most successful and popular sports figures of the 20th century, regarded as one of the greatest players of all time, and renamed “the greatest” by FIFA. The former Brazilian football star, born in 1940, is well-known for his diplomatic career. He spent almost his entire soccer career with Santos. Pele was a goal-scoring machine, with 1,281 goals in 1,363 games. People recognize him as the “King of Football.” He won innumerable titles with Santos and holds the record for the most hat-tricks scored, which he achieved in 1992. Pele is the only soccer player to have won three World Cups. In the 1966 football, World Cup Brazil got eliminated in the first round.

In 1970, he won the World Cup and was a player of the tournament. Pele has served as UNESCO’s goodwill ambassador and the United Nations’ ambassador for ecology and the environment. Pele has written several autobiographies and has appeared in documentaries. In 2010, Pele was recognized as Honorary President of the New York Cosmos.

David Beckham is the best-retired soccer player from England. He achieved international credit for both his on-field performance and his highly disclosed personal life. David Beckham is one of the most attractive footballers of all time. He was enormously popular during his career, and he may be even more so now. Beckham has had it all, from million-euro endorsements to being a fashion icon. David Beckham is a right-winger famous for his passing range, and crossing ability. Also, bending free-kicks has been hailed as the greatest and most recognizable midfielders of his era, as well as one of the most suitable set-piece experts of all time. His notable charitable work, television appearances, and role as the global ambassador of Chinese football have helped him become the most famous retired footballer in history.

Johan Cruyff is the greatest Dutch forward for his inventive playmaking. He received numerous awards, including European Footballer of the Year (1971, 1973, and 1974). Cruyff was a football legend, and his enormous influence on shaping the modern game will never be measured. He is often mentioned alongside Pele, Diego Maradona, and Eusebio as the greatest player of all time, but Cruyff continued to give so much more to soccer after his playing days were over.

Although he was primarily a playmaker, he would shift to different positions to confuse his opponents. Johan Cruyff could play as a centre-forward for a while before switching to a deep-lying midfielder as needed. Johan Cruyff won the Ballon d’Or three times in his career. In 520 competitive matches, he also scored 291 goals. Cruyff also won league championships in both Holland and Spain. He scored 33 goals in 42 matches for the Dutch national team. In addition, the Dutch national team never lost a match in which Johan Cruyff scored. He was a member of the legendary 1974 World Cup team that rolled to the finals against West Germany.

Cruyff had always said he’d retire at the age of 31, for reasons only he knew, and he kept that promise. Cruyff retired from international football in October 1977, after helping the Netherlands qualify for the World Cup. Without him, the Netherlands finished second in the World Cup for the second time. He won his ninth Dutch championship and his fifth national cup there. Cruyff coached Ajax (1987) and Barcelona (1989) to European Cup Winners’ Cups after retiring as a player in 1984.

Michel Platini is a professional football (soccer) player and manager from France. He was European Footballer of the Year three times (1983-1985). Michel Platini is one of the greatest footballers of all time, having won the Ballon d’Or award three times in a row in 1983, 1984, and 1985, as well as finishing seventh in the FIFA Player of the Century vote. He was made a Chevalier of the Legion d’honneur in 1985 and an Officier in 1998 in recognition of his achievements. Also, he was the president of the Union of European Football Associations (UEFA) from 2007 to 2016.

Michel Platini is the most famous retired soccer player. He was another French soccer star who retired at a young age. He retired in June 1987, the same month he turned 32, after winning Euro 1984 with France and the Ballon d’Or three times in a row between 1983 and 1985.

Read also- The Greatest French Football Players Of All Time

Eric Cantona is the best French football player. He was one of the sport’s biggest stars in the 1990s, best known for his pivotal role in reviving the English powerhouse club Manchester United and for his volatile play. He appeared in many films and television commercials. Cantona has also a captain of France’s national beach football team. He also had a brief appearance on an album by the French rock band Dionysos.

He was named Overseas Player of the Decade at the Premier League 10 Seasons Awards in 2003. In 2021, Cantona will be inducted into the Premier League Hall of Fame. Pele named him to the FIFA 100 list of the world’s greatest living soccer players in 2004. He retired from football at the age of 30 after assisting Manchester United to their fourth league title in five years in 1997. Cantona was beloved by Manchester United fans, who voted him Player of the Century in a 2001 poll.

Marco Van Basten is famous for his excellent ball control, attacking intelligence, excellent headers, and sensational strikes and volleys. Van Basten was FIFA World Player of the Year in 1992. He was three times the winner of the Ballon d’Or, in 1988, 1989, and 1992. Van Basten’s greatest international success came in Euro 1988. He led the competition in scoring with 5 goals. In the finals, he scored a memorable hat-trick against England and a spectacular volley against the Soviet Union. After two years on the sidelines with a sprained ankle, the Dutch master retired in 1995 at the age of 31. In 280 competitive matches, he also scored 218 goals. While his record is not as impressive as Eusebio’s, he accomplished it despite a career cut short by injuries. That’s quite impressive.

Ferenc Puskas scored 514 goals in 529 competitive matches for Budapest Honved and Real Madrid. That is nearly a 1:1 goal-to-match ratio. His international goal total for Hungary is even better: 84 goals in 85 games. In 1954, Puskas was nominated for the European Player of the Year award. He led Hungary to the finals of the 1954 World Cup in Switzerland, but Hungary was defeated by West Germany. He retired from playing in 1966 and worked as a coach for several years after that. Puskas returned to Budapest in 1993, and the football stadium was renamed in his honor in 2002.

The best retired French soccer player and one of the greatest players who led his country to World Cup victories in 1998. As a manager, Zidane has won 11 trophies in total. FIFA Club World Cup, UEFA Super Cup, UEFA Champions League La Liga, UEFA Champions League, UEFA Super Cup, FIFA Club World Cup, and Spanish Super Cup are all competitions. When Zidane announced his retirement after the 2006 World Cup, he was 34 years old, which is an excellent age to do it. The playmaker for France helped Les Bleus advance to the championship throughout the competition. Since his retirement, he has also joined Real Madrid’s coaching staff, where he currently holds the position of head manager. In addition to everything else, he has sponsorship deals for millions of dollars.

Sir Bobby Charlton, the most celebrated midfielder of England’s Manchester United Charlton, who is now a director at his former club Manchester United, has made and continues to make significant contributions to English football. In 1994, he was knighted, making him only the sixth person to receive the prestigious award for contributions to football. In 2008, he was also awarded the BBC Sports Personality of the Year Lifetime Achievement Award. He has also been involved in some reputable charitable activities and organizations, as well as a member of the Laureus World Sports Academy. Charlton retired from international football at the age of 32 in 1976, after a record 106 caps and 49 goals.

We hope you enjoyed our article on The Top 10 Best Retired Soccer Players. Please share your thoughts in the section below. Wikipedia provides information on the top 10 famous retired soccer players. Our website makes no guarantees about the accuracy of the information because it is subject to change.