Skip to content
Home » Top 10 Best Football Referees Of All Time | Who is the world’s best football referee? 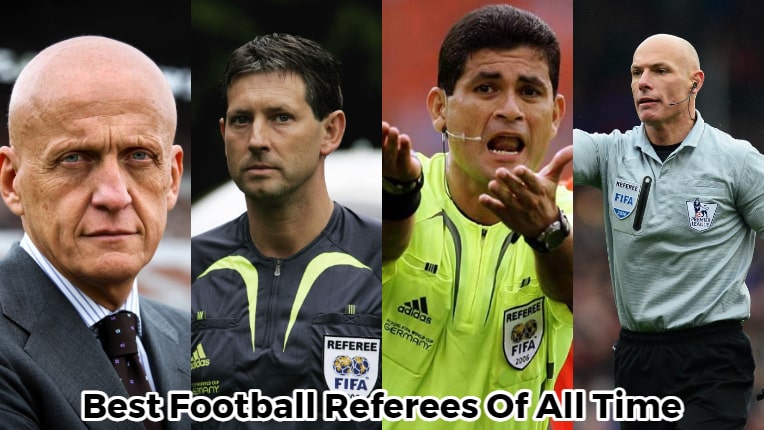 Football is a beautiful game that cannot be enjoyed without the presence of the best referees. During a football game, the referee is in charge of enforcing the rules. Referees are trained in FIFA-affiliated national camps, and each national organization recommends its top officials to FIFA for inclusion on the FIFA International Referees List.

Why referee is important in football (soccer)?

Referees’ primary responsibility in football is to enforce the game’s rules during the game. Referees have the authority to issue yellow or red cards to players, halt or terminate play due to risk factors, and assess fouls and penalties. This is the primary reason for their appointment, and as a result, they have full authority to penalize players who violate the rules during the game.

The referee makes decisions on all facts related to the game and is the only official on the field with the authority to start and stop play as well as discipline players during any football match. A referee also works with the assistant referees and even the fourth official to ensure that matches run smoothly. Here’s a list of the 10 greatest football referees of all time.

Pierluigi Collina, an Italian former football referee, was a FIFA-listed referee from 1995 to 2005. He has been named FIFA’s “Best Referee of the Year” six times in a row and is widely regarded as the best referee in international football history. Collina currently serves on the UEFA Referees Committee and has been the Chief of the Football Federation of Ukraine since July 5, 2010. He changed his referee’s mind back in 1977.

His memorable matches include the Olympic Men’s Football Final between Nigeria and Argentina in 1996, as well as the UEFA Final between Bayern Munich and Manchester United. He has very distinct features as a result of alopecia, a disease that caused him to lose all facial hair. His most notable accomplishment is being named IFFHS World Best Referee of the Year six times in a row. He is now a consultant for the UEFA Referees Committee. The football world will never forget him as the best international modern football referee.

Collina earned the descriptor ‘Kojak’ due to his distinctive baldness caused by alopecia. In 1995, he was inducted into FIFA’s Referees List after officiating in 43 Series A matches. He officiated the 2002 FIFA World Cup Final between Brazil and Germany, as well as the 1999 UEFA Champions League Final between F.C. Bayern Munich and Manchester United.

Frank de Bleeckere was named the best Belgian Referee of the Year seven times in a row. He accomplished this feat from 2000 to 2013. He began refereeing in 1984 and worked as a FIFA-affiliated official from 1998 to 2012. In 2001, he made his international debut in a match between Cyprus and Ireland in the 2002 FIFA World Cup Qualifier. Bleeckere then continued his international career by officiating in numerous matches. Frank de Bleeckere’s initial ambition was to become a football player, but his injuries hampered his efforts. He then decided to change careers and become a referee.

Oscar Ruiz Acosta, a retired Colombian football referee, established himself as the best Colombian referee of all time. From 1995 to 2011, he worked as a FIFA-affiliated referee. Oscar Ruiz is a Columbia native and a lawyer. He retired in 2011 after establishing himself as one of Colombia’s best referees of all time. He was a FIFA-listed referee from 1995 to 2011, and he made his international debut in a match between Paraguay and Venezuela in 1995.

Acosta is now a member of FIFA’s referee instructor team. He made his international debut on July 12, 1995, in a match between Paraguay and Venezuela. He also officiated in three consecutive FIFA World Cups, beginning with the 2002 FIFA World Cup and ending with the 2010 FIFA World Cup. Ruiz came under fire after sending off Yoann Gourcuff in the final group stage match between France and South Africa. He served as a member of CONMEBOL’s referee assistance program after retiring from active refereeing. Aside from his football career, he is also a lawyer.

Merk has officiated many high-profile matches, including the 1997 UEFA Cup Winners Cup Final, the 2003 UEFA Champions League Final, and the EURO 2004 Final. He left the company in 2008. He used to be a dentist behind the scenes of football matches, but now he is a Sky Deutschland pundit, motivational speaker, and philanthropist. Markus Merk worked as a FIFA-listed referee from the 1993 World Cup qualifier until his retirement after the match between Bayern Munchen and Hertha BSC Berlin on the final day of the 2008 Bundesliga season. He currently serves as the main referee commentator for the Turkish channel Lig TV, which broadcasts the Turkish Super League. He is a professional dentist in addition to his refereeing career.

Kim Milton Nielsen, a former Danish football referee, was known for his distinctive tall appearance, as he was taller than most international football players. During his career, he officiated 154 internationals and 53 UEFA Champions League matches. He began his career at the age of 15 and became a FIFA-affiliated referee in 1988, at the age of 28. He then continued to serve until he reached the UEFA-mandated retirement age of 45 on May 16, 2006. Kim Milton played in the FIFA 2011 semi-final between Brazil and Turkey, as well as three UEFA Champions League Finals in 2003, 2004, and 2005.

In 2012, IFFHS named him the World’s Best Referee. Aside from his international accomplishments, he also officiated numerous important club matches. Taca de Portugal finals, Taca da Liga finals, and Supertaca Candido de Oliveira were all officiated by Proenca. He also officiated many matches during the 2014 FIFA World Cup in Brazil.

In addition to his international career, Vautrot officiated in three European Championships from 1984 to 1988. He later presided over the 1986 Euro Cup Final between FC Barcelona and FC Steaua Bucharest. He was named the World’s Best Referee by IFFHS twice in a row. Michel Vautrot was heavily chastised after FIFA banned FC Roma for bribing him with £50,000. Roma, one of the wealthiest football clubs, did this before the 1986 European Cup semi-final.

Also, read- Who Are The Top 7 Greatest Goalkeepers Of All-time In World Football History

Mikkelsen was named World’s Best Referee by the International Federation of Football History and Statistics in 1991 and 1993. After the 1998 FIFA World Cup qualifiers, he announced his retirement from active refereeing. In addition to his referring career, he worked for ten years in the Human Resources department of the Danish company F-Group. This referee died on January 30, 2019, after a long battle with cancer.

Sandor Puhl, a retired Hungarian football referee, is widely regarded as one of the best in soccer history. He is a highly criticized figure in Spain due to his negligence during the 1994 World Cup quarter-final between Italy and Spain, when Mauro Tassotti elbowed Luis Enrique on the face in the penalty box during injury time, breaking Enrique’s nose. Puhl is the IFFHS World Best Referee four times in a row from 1994 to 1997, making him one of the best referees in the world. However, his career did not go as planned. His failure to play fairly in the 1994 quarterfinal match against Spain resulted in a FIFA suspension of eight international matches. In addition to refereeing, he was the Deputy Chairman of the Hungarian Football Association from 2000 to 2006.

Howard Webb, an English former football referee, announced his retirement from active refereeing on August 6, 2014. To serve as the Technical Director of the Professional Game Match Officials Board. Webb’s father was a referee for 35 years, which inspired him to pursue this career. From 2005 to 2014, he worked as a FIFA referee. He set a record by being a referee for both the UEFA Champions League final and the FIFA World Cup Final in the same year, 2010. He retired in 2014 and now works as the Manager of Video Assistant Referee Operations for Major League Soccer’s professional Referee Organization. Many consider him to be the best football referee to come out of England.

From 2005 to 2014, he was a FIFA-listed referee, and he also officiated in Premier League matches from 2003 until his recent retirement. In 2010, he was the first referee to officiate both the UEFA Champions League Final and the FIFA World Cup Final in the same calendar year. Webb also officiated in numerous FA Cup, FA Community Shield, and Football League Cup finals. He was named FIFA’s Best Referee of the Year in 2010 and received New Year Honors in 2011 for his contributions to football. He was a sergeant in the South Yorkshire Police before embarking on his refereeing career.

We hope you enjoyed our article on the list of the 10 best referees in football. Please drop your opinions in the comment box. The information for this article is acquired from Wikipedia. Since this topic is subject to change, our website provides no guarantee for the accuracy of the information.