Skip to content
Home » World Football: Who Are The Top 10 Best Left-Footed Players In The World Right Now 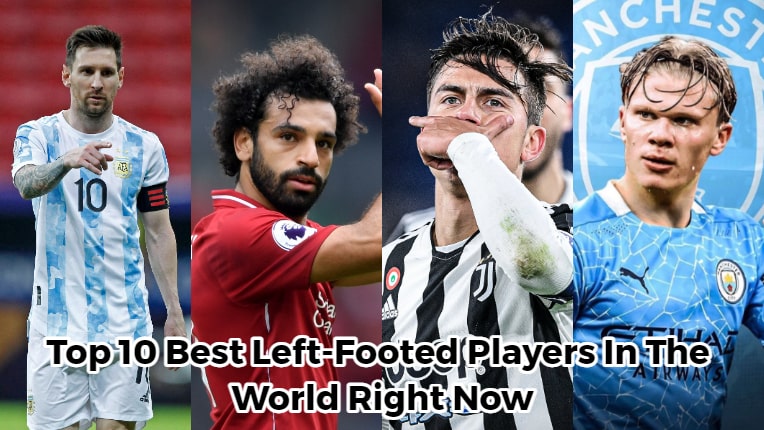 A left-footed football player is always regarded as a valuable asset to any football team. According to a recent survey, only 19% of professional footballers prefer to play with their left foot, but 6 out of the 10 greatest players of all time are left-footed. Continue reading to learn more about the greatest left-footed players in football records.

Many football legends prefer to kick with their left foot rather than their right. Left-footed soccer players are commonly allocated to the left-wing or left-back position. This is since their strong foot is the furthest away from an attacker, giving them more time and space to kick and pass the ball. Lionel Messi, Ryan Giggs, Roberto Carlos, Gareth Bale, and Paolo Maldini are all examples of unstoppable greatest left-footed players in the world football history.

In general, left-footed players are an incredible natural talent for football. They are extremely skilled and creative wizards, but their decision-making is far more elusive than the right-footed. That is why we have compiled a list of the top ten best Left-Footed Soccer Players in the world right now.

Lionel Messi, another left-footed player, has been compared to glue for his ability to maintain possession and control of the ball. Messi is a left-footer who is one of the best dribblers in soccer history. Because of his excellent passing skills and vision to find teammates in space with precise passes, he is a playmaker. Lionel Messi is widely regarded as the best soccer player in the world. His quick dribbling skills and elusive ball tricks put him in a league of his own. At the age of 24, he is a goal scorer, playmaker, and electrifying talent.

Yes, Mohamed Salah is a left-footed player. With his team, this Liverpool’s most lethal attacker in European soccer has won the Champions League and the Premier League. Salah is unwavering in his belief that he is the best player in the world at his position. The Liverpool forward was recently named Footballer of the Year by the Football Writers’ Association in England, and he believes their members voted correctly. The Egyptian striker scored 44 goals in his first season at Anfield, which he followed up with another 27 the following season after signing a new contract with the club in the summer of 2018. He is one of the most well-known soccer players in the world and one of Europe’s best left-footed players.

Juventus star Paulo Dybala is well-known for his ability with his left foot. To his credit, the young Argentine has used it well this season, leading La Dolce Vita to the Champions League finals and yet another Serie A title. “Dybala is a fine player who is also very intelligent,” Allegri added. “He enjoys playing almost as a trequartista, connecting the forwards to the midfield.” He has very specific plans for what he wants to do.” Dybala is known for his dribbling skills in tight spaces, close ball control, and ability to beat opponents one-on-one. He is also known for his ability to defend or hold up the ball for teammates with his back to the goal, as well as his ability to defeat opponents in one-on-one situations.

David Josue Jimenez Silva, a left-footed Spanish-based professional footballer, now plays for Manchester City and the Spain national team. “Silva is the player with the best sense of space, in terms of knowing where his opponent is and where to stay on the field to create the most space for your teammates.” “He’s so intelligent the way he plays,” the Portugal star added. Silva, a holding midfielder, can also play on the left or right side of the striker. David Silva is currently regarded as one of the best left-footed players in the world.

Romelu Lukaku, a left-footed striker, is one of Europe’s most promising young talents in the world. Lukaku was known for his aggressiveness in his early years, which he frequently used to get past opponents and score goals. The best thing about Romelu Lukaku is his versatility. He is arguably the best all-around center-forward in the world right now. His physical and tactical versatility allows him to play as an outright striker or as a poacher on the flank, but his preferred position is as a target-man in the centre of the field.

Erling Haaland, who currently plays for Borussia Dortmund, is a legend. Because of his youth, Haaland’s goal-scoring ability is particularly impressive. Haaland reads the defence well, makes great off-ball movements to confuse the defence, and starts in open space. Haaland is extremely difficult to stop due to his incredible acceleration and speed, as well as his precise shooting. He is one of the most sought-after players in the NFL, and he burst onto the scene like a few others. His incredible athleticism and finishing ability are weapons that any club would love to have. Furthermore, at such a young age, he has the potential to become one of the best players of this generation. He is the best left-footed football player in the world.

Is Haaland coming to Man City?

Manchester City has agreed to pay £51.1 million for Borussia Dortmund striker Erling Haaland. Erling Haaland is expected to join Manchester City in the Premier League on July 1, 2022. Man City has paid the release clause and expects to pay a total of £85.5 million when agent fees, signing bonus, and other costs are factored in.

Left-footed Mahrez is most often used as a right-winger, where he can cut inside and shoot on goal or make deliveries into the penalty area with his stronger foot. Mahrez is a captivating talent who possesses exceptional balance and control and is seemingly capable of bamboozling defenders at will with one of his trademark mazy dribbles. He is, however, a versatile player who can play anywhere along the front line, whether as an attacking midfielder in the centre, a winger on either flank or even a false nine upfront. As a result, it should come as no surprise that he is now regarded as one of the best left-footed players in the world.

Leroy Sane had won two Premier League titles in four years with Pep Guardiola’s Manchester City. He is a professional footballer from Germany who currently plays as a winger for Bundesliga club Bayern Munich and the German national team. He won the Centurion with City in 2017, after previously playing for Schalke. His left crosses are mostly driven, whereas his right crosses are mostly in the air. Sane frequently takes advantage of the space provided by a high-block and goes for runs.

The most important and enjoyable aspect of his game is the ability to create, find, and move through space. Sane excels at what he does best, whether it’s attacking spaces or dropping down to create space. Watch how he starts slowly and then suddenly picks up the pace when he sees the space in front of the team.

During his time at Real Madrid, Ozil was dubbed “The New Zidane.” He is an accomplished left-footed player with a wide range of skills that enable him to get into good attacking positions, create numerous chances for his teammates, and even score goals himself. Mesut Ozil’s positives are few and can be summarised as his brain and his left foot. But these two characteristics are so refined that he has established himself as one of the world’s best players. Few players can match Ozil’s soft touch, control, and precision with the ball. While his vision and positioning sense is important, he can also score goals and set up other players for success. So it’s no surprise that he’s on the list of the best left-footed football players.

Di Maria, in addition to his ability to play as an attacking winger, can also play as a central attacking midfielder or on either side of the field. Di Maria has been one of the most complete and effective wide midfielders in world football, from signing for Benfica in 2008 to winning La Decima with Real Madrid, and from reaching the World Cup final with Argentina to helping PSG to their first European Cup showpiece with Bayern Munich last season. Despite his small stature, Di Maria is a quick dribbler with excellent ball control and quickness, which allows him to outplay his opponents.

FAQs About Best Left-Footed Soccer Players In The World

Is being left-footed an advantage?

According to the research, left-footed footballers outperform their right-footed counterparts. Players who prefer their left foot have inverted brain hemisphere functions, which adds to their unpredictability.

Is left foot better than right?

The best football players practice on their weak feet. When it comes to defending, right or left usually doesn’t matter once you learn how to win the ball back from the opposition. There is no distinct advantage for left-handed players over right-handed players.

Is Messi left-footed or right-footed?

Lionel Messi, arguably the greatest player of all time, is another left-footed wizard capable of weaving all kinds of magic with a left foot that has been compared to glue due to his ability to retain possession and control of the ball.

We hope you enjoyed our article on the list of top 10 best left-footed players in football right now. Please drop your opinions in the comment box. The information for this article is acquired from Wikipedia. Since this topic is subject to change, our website provides no guarantee for the accuracy of the information.