Skip to content
Home » Who Are The Top 10 Best Manchester United Players Of All Time? 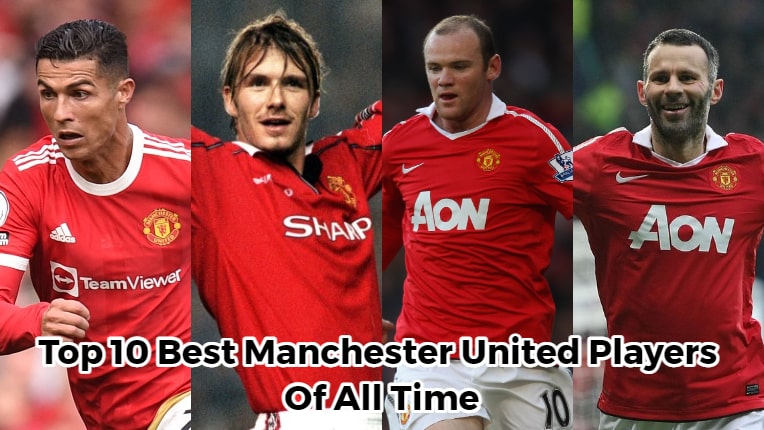 Over the years we’ve seen some of the best players from Manchester United. The greatest legends of Manchester United like Cristiano Ronaldo, Wayne Rooney, Ryan Giggs, Bobby Charlton, & David Beckham helped the club to become a top-flight soccer club. Manchester United, Arsenal, Tottenham Hotspur, Liverpool, Everton, and Chelsea are among them. For decades, these six clubs have been fixtures in the top flight. Since 1992, Man United has won the Premier League 13 times. In total, the Manchester United club has won a record of 20 English League titles, a record 12 FA Cups, 4 League Cups, 3 European Champions Cups, and 1 FIFA Club World Cup. Man United is one of the most successful clubs in England. Here’s a list of the top 10 best players of all time from Manchester United.

Man United stunned the football world and delighted the club’s global fan base on August 27, 2021. Manchester United club announced a transfer agreement with Juventus for Cristiano Ronaldo to rejoin the Reds. Ronaldo scored 118 goals in all competitions for Man United between 2003 and 2009, including 84 in the Premier League, and has added to that total since his return to Old Trafford last summer. He had won over 30 major trophies by the summer of 2021, including five UEFA Champions Leagues, four FIFA Club World Cups, and seven league championships after becoming the first player to do so in England, Spain, and Italy.

David Beckham is a former professional footballer from England. He is now the president and co-owner of Inter Miami CF and a co-owner of Salford City. He is the best Manchester United player & celebrity outside of football, as well as his love of his image, tended to obscure just how outstanding he was. Beckham had a stellar career that lasted 21 years. During this time, he played at Manchester United, Preston North End, Real Madrid, Milan, LA Galaxy, Paris Saint-Germain, and England, where he held the outfield appearance record until 2016.

Beckham had 265 Premier League appearances and 61 goals for United. He also appeared in 81 Champions League games, scoring 15 goals. David Beckham is the first English player to win league championships in four different countries: England, Spain, the United States, and France. He announced his retirement in May 2013 after a 20-year career in which he won 19 major trophies.

Wayne Mark Rooney is the best Manchester United and England national team footballer who plays for and captains both clubs. He is the manager of Derby County in the EFL League One, where he previously served as interim player-manager. He spent the majority of his playing career as a forward, but he was also used in various midfield roles. Rooney is Manchester United’s all-time leading goal-scorer, he scored 253 times in 559 appearances. Rooney was one of United’s most decorated players, winning 13 major trophies during his tenure, including five league titles, four League Cups, and the FA Cup, Champions League, Europa League, and Club World Cup on one occasion.

The former England star asked to leave Old Trafford in 2010, sparking one of the biggest transfer sagas in football history in the last decade or so. Rooney insists he was concerned about the club’s direction following the departures of Carlos Tevez and Cristiano Ronaldo.

Ryan Giggs is a former player and coach in Welsh football. He is the Wales national team manager and a Salford City co-owner. Giggs spent his entire professional career with Manchester United. He briefly served as the club’s interim manager after David Moyes got fired in April 2014. Ryan Giggs, a one-club man, made his Manchester United debut in 1991 and went on to play 963 times for the club, scoring 168 goals in 24 years. He turned professional in November 1990 and made his league debut as a substitute for Denis Irwin against Everton on March 2, 1991. Ryan Giggs ended one chapter of his football career – his epic, the decades-long story as a player – on the same day he began another, as Manchester United’s new assistant manager.

He made a Manchester United record 963 appearances, and the 34 trophies he won at Old Trafford, including 13 Premier League titles, four FA Cups, and two Champions Leagues, made him the most decorated player in English football.

Sir Bobby Charlton is an English former footballer. He is one of the greatest midfielders of all time, and an essential member of the England team that won the World Cup in 1966, the same year he won the Ballon d’Or. Sir Bobby Charlton personifies Manchester United’s values better than anyone else. After surviving the trauma of the Munich Air Disaster at the age of 20, he played every game as if it were for his fallen colleagues, recovering from his injuries to reach the pinnacle for both club and country. Bobby Charlton left Manchester United at the end of the 1972–73 season. In his 17-year-long career with Man United having played 758 games and scored 249 goals. His records were longstanding until that surpassed by Ryan Giggs in 2008 2008 UEFA Champions League Final, and Wayne Rooney in 2017.

George Best was born on May 22, 1946, and died on November 25, 2005. He is a Northern Irish footballer who played as a winger for Manchester United for the majority of his career. Best, a skilled dribbler, is one of the greatest players in the history of the sport. In 1968, he was recognized as a European Footballer of the Year and finished sixth in the FIFA Player of the Century vote. George Best had a playing style that will always honor for combining speed, skill, balance, feints, two-footedness, goalscoring, and the ability to get past defenders. From 1963 to 1974, George Best appeared in 470 games for Manchester United in all competitions, scoring 179 goals. He’s one of the greatests ever to play for the Man United club.

Read also- Top 10 clubs with the most trophies in Europe

Eric Cantona joined Manchester United on November 26, 1992, winning four Premier League titles in his first five seasons. Cantona scored 64 league goals for United, 13 in domestic cup competitions, and 5 in the Champions League, totaling 82 in less than five years. Manchester United supporters identified him as “King Eric.” Cantona won the league championship in seven of his last eight full professional seasons. Eric Cantona declares he left playing football because he got bored with it. That is the most Cantona-like explanation. However, in an interview a few years ago, the Frenchman claimed that he announced his shocking decision to retire from football in 1997 because he no longer had “passion” for the game.

Paul Scholes was the only player (along with Keane, I believe) on Football Manager 2000s to have all of his stats at top 10/20 or higher, implying that he was the ideal all-around player with no obvious flaws. He was already in his 30s at the time. Everyone at Man United club comprehends Scholes is the best player. ” Ferguson stated that there is only one Paul Scholes and that no one else can play like him. Paul Scholes has left his imprint on Manchester United history. He is an English football coach, former player, and Salford City co-owner. Between 1993 and 2013, he spent his entire professional playing career with Manchester United, where he scored over 150 goals in over 700 appearances. Paul Scholes also appeared in 66 England national team games, scoring 14 goals.

Robin van Persie is a former striker and coach from the Netherlands. He is the all-time leading scorer for the Netherlands men’s national team. He is one of the best strikers of his generation. Van Persie was well-known for his superb technique and ball control, as well as his intelligent positioning and vision. Man United won their 20th championship with the help of Robin van Persie. Manchester United faced a difficult test in their first league game without Sir Alex Ferguson in over 26 years. Van Persie, on the other hand, continued where he left off the previous season.

Arsene Wenger converted Van Persie to a striker and he went on to be a consistent goalscorer for Arsenal. Before joining rivals Manchester United in July 2012, he set a club record with 35 goals in 2011 and served as club captain for the 2011–12 season. He won the Premier League and his second consecutive Premier League Golden Boot in his first season. Van Persie fell out of favor at Man United after two injury-plagued seasons and the club later allowed him to leave for Fenerbahce in July 2015.

Peter Schmeichel was born on November 18, 1963. He is a former Danish football goalkeeper who was named the IFFHS World’s Best Goalkeeper in 1992 and 1993. He will be remembered for his most successful years at the English club Manchester United. Also, he captained the club to a treble-clinching UEFA Champions League in 1999 and winning UEFA Euro 1992 with Denmark.

Schmeichel, then at the age of 28, joined the Reds from the Danish side Brondby on August 6, 1991. The best goalkeeper in history, and the standard against which every other Manchester United goalkeeper will be measured, along with van der Saar. He spent the majority of his career with United, totaling eight years. Peter Schmeichel, is one of the Premier League’s best goalkeepers. He will be the best for his header for Manchester United against Rotor Volgograd in the UEFA Cup. Schmeichel expressed his desire to exercise a one-year contract extension with Sporting in January 2001, but ultimately decided to leave the club when his contract expired in June 2001.