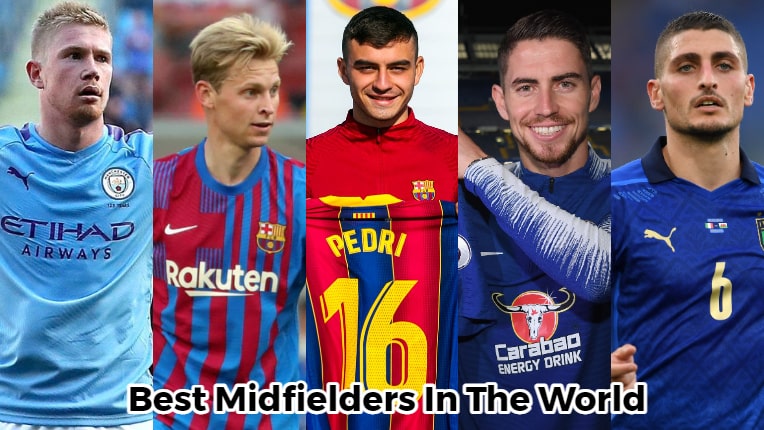 As attacking midfielders, some of the most talented players have graced the beautiful game. This year’s case is no exception. The world’s best in the position have maintained their class, while some new names have added to the luster. Nonetheless, more players are claiming the role as their own. This year, a select few have consistently demonstrated their quality in the role. So, let’s take a look at the world’s top 10 best midfielders.

Kevin De Bruyne currently tops our list of the best midfielders in the world right now. The Belgium and Manchester City star is widely deemed as the best attacking midfielder in the world right now among all other soccer players. Apart from Cristiano Ronaldo and Thierry Henry, he is the only player to have won the PFA Players award Player of the Year award back to back. The Belgian’s name will undoubtedly come up in any discussion of the world’s best-attacking midfielders. The Manchester City star has continued to demonstrate his class and quality on the field for both club and country. De Bruyne won the Premier League and the Carabao Cup in 2021. In addition, he led his team to their first-ever Champions League final.

PFA stands for Professional Footballers Association Men’s Players’ Player of the Year, and this is an annual award that is given to the player judged to be the best of the year in English football based on their annual performances.

Frenkie de Jong was born on May 12, 1997, and is a Dutch footballer who plays as a midfielder for La Liga club FC Barcelona and the Netherlands national team. He is a versatile midfielder known for his vision, passing, dribbling, technique, strong defensive abilities, and attacking prowess. Frenkie De Jong, a great midfielder, has frequently been ranked among the best midfielders in the world. De Jong began his soccer career at Willem II in 2015. He is a box-to-box midfielder who has won multiple individual awards, including the 2018/19 UEFA Champions League.

Pedri became the youngest player in La Liga Santander’s history to score and assist in the same game, accomplishing so away at Athletic Club at the age of 18 and 42 days. He is an incredibly intelligent and technically gifted player, and his speed and acceleration in making quick, clever receiving movements make him very difficult to defend against because he is so capable of finding space and immediately demanding the ball once he has done so. With his dazzling talent and skills, the 19-year-old Spaniard has astounded many. In the central midfield position, he is a regular starter for Barcelona and the Spanish national team. Pedri also won the Golden Boy Award for the best under-21 player in Europe in 2021.

Pedri is an extremely intelligent and technically gifted player whose accurate passing and ability to find space on and off the ball make him a joy to watch. He constantly demands the ball and is proficient at adjusting the cadence of his team’s play as needed. Pedri is the latest talent to leave the Canaries and shine at the highest level of European football, joining Yeremy Pino (Spanish footballer) at Villarreal. Pedri, who was born in Tenerife, joined Las Palmas’ academy from Juventud Laguna in 2018, but he only had to wait a year before being promoted to the first team by then-manager Pepe Mel.

4. Jorginho- The Very Best Midfielders In The World

Jorginho is a technically gifted defensive midfielder who prefers to play as a focal point and dictate the tempo of the game. With Chelsea, he won the 2021 Champions League and Club World Cup, as well as the 2020 Euros with Italy. Jorginho was named Best Fifa Men’s Player and UEFA Player of the Year for his performances with Chelsea and the Italian national team in the 2021 season. Chelsea manager Thomas Tuchel referred to him as one of the “world’s best midfielders.” His is a very useful trait that the best central midfielders must have to play at the highest level. When the ball is in an advanced position, Jorginho will offer assistance and try to provide a backward passing option to a teammate if their forward route is blocked.

Marco Verratti is an Italian professional footballer who currently plays as a defensive midfielder for Paris Saint-Germain Football Club. Verratti is a creative, hardworking, and technically gifted playmaker who began his career with the Italian club Pescara in 2008, quickly rising to prominence as one of Europe’s best young midfielders. Verratti also had a very successful career spell with his first club, Pescara, where he played a total of 79 games, helping the team win the 2011–12 Serie B title, and winning the 2012 Bravo Award. Marco Verratti played the full 90 minutes at the Stadio Renzo Barbera and says the final result has been difficult for the entire squad to deal with, especially after their European Championship win the last summer (in July 2021), which initially boosted their confidence about going to Qatar World Cup this year.

Which midfielder has scored the most goals in the Premier League?

Lampard has the most Premier League goals by a midfielder, followed by Toure, Bruno, and Gerrard. As demonstrated above, these three midfielders have put up numbers that even strikers would be proud of. Bruno Fernandes scored 28 goals in all competitions in the 2021/22 season, 19 of which came without the use of penalties.

Which midfielder has the most goals in 2021?

Fernandes assisted on 30 goals last season, averaging one every 103 minutes in the Premier League. No other Midfielder has more goals than Bruno Fernandes in the European Top5 leagues in 2021.

Who is the highest-scoring midfielder in England?

Frank Lampard- Lampard, arguably England’s greatest midfielder, scored 303 goals in his career. 27 of those 303 goals were scored for the country.

We hope you enjoyed our article on Best Midfielders In The World. Please drop your opinions in the comment box. The information for this article is acquired from Wikipedia. Since this topic is subject to change, our website provides no guarantee for the accuracy of the information.