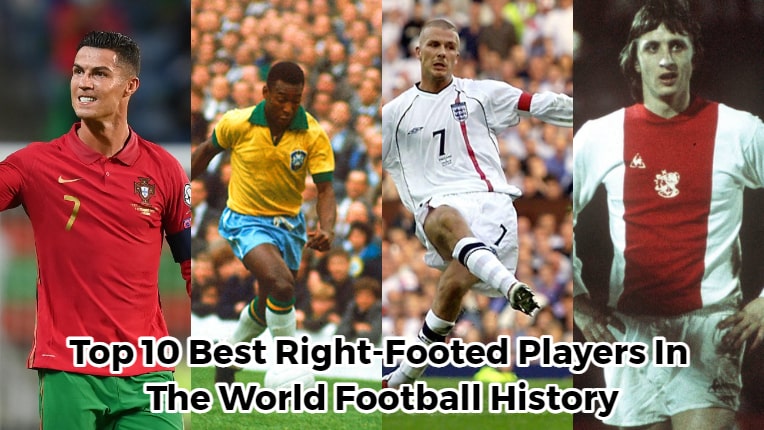 When those two great players are removed from the equation, the rest of the list is dominated by right-footed players. Also, the majority of the world’s top players are right-footed. As a result, they struggle to stand out in a crowd, and it takes something extraordinary to set them apart. Based on their statistics, we have compiled a list of the Top 10 Best Right Footed Players of All Time. So let’s get right to it.

Right backs are typically right-footed to cross the ball towards a goal with their strong foot (i.e. Right foot). The vast majority of footballers are right-footed. Many people wonder why left-footed players outperform right-footed players. Left-footed soccer players are typically assigned to the left-wing or left-back position. This is because their strong foot is the furthest away from an attacker, giving them more time and space to kick and pass the ball.

Who is the best right-footed player?

Cristiano Ronaldo, the Portuguese legend, tops the best right-footed football players list. However, Ronaldo and Iniesta are the only players on the list who are still active in soccer.

Cristiano Ronaldo is without a doubt the greatest right-footed footballer of all time. Other than Cristiano Ronaldo, no other right-footed player has remained at the top of the game. The Portuguese hold the record for most international goals as well as the most Champions League goals. Cristiano Ronaldo received his first Balon d’Or in 2008. He went on to win five Balon d’Ors throughout his career. At 37 years old, Ronaldo is still breaking records and demonstrating elite-level consistency.

Pele is one of the greatest football players of all time, and it comes as no surprise that he possessed an exceptional right foot. The greatest Brazilian soccer player and legend Pele won the World Cup three times: in 1958, 1962, and 1970. Pelé is the only player in football history to have scored more than 1200 goals in his senior career, making him the player with the most right-footed goals. He was surpassed as the greatest football player of all time by Lionel Messi and Cristiano Ronaldo, but he remains an inspiration to many young soccer players. Pele is Brazil’s all-time leading goalscorer, having scored 77 goals in 92 games.

Pele also played club football for Santos and the New York Cosmos. He scored 643 goals in 659 games for Santos before joining the New York Cosmos after 18 years. Pele is credited with popularizing the phrase “The Beautiful Game” through his proclivity for scoring spectacular goals and mesmerizing illusions. Pele is, without a doubt, one of the best right-footed soccer players of all time.

Read also- The most skilled footballers in the world right now

Zinedine Zidane is the best midfielder of his generation. Also, the greatest right-footed football player of all time. Zidane was a veteran of his skills, and he made football look so easy at times. The former French midfielder scored two goals against a star-studded Brazilian team in the 1998 World Cup final, helping France win the World Cup. Zidane later won the Ballon d’Or in 1998. Zidane was a midfield sensation who made football appear effortless. He was well-known for his playmaking abilities, agility, vision, and goal-scoring eye. In addition to winning the Ballon d’Or in 1998, and also, the Frenchman was named FIFA World Player of the Year in 1998, 2000, and 2003.

Johan Cruyff is one of the greatest players to have ever graced the beautiful game. The three-time Ballon d’Or winner possessed a powerful right foot. He is a Barcelona, Ajax, and Netherlands national team legend. Cruyff also received numerous other awards, including European Footballer of the Year (1971, 1973, and 1974). Cruyff would drop deep in the attacking half to carry the ball forward and manage play. Johan Cruyff was a trailblazer, distinguished by his agility, acceleration, and awareness as a one-of-a-kind world-class soccer athlete.

During his club career, Johan Cruyff scored 263 goals and assisted countless times. The Cruyff turn is an evasive dribbling move named after Dutch footballer Johan Cruyff. He was not only a skilled footballer but also a powerful manager. Cruyff designed La Masia as we know it today and also had a successful managerial career. He was a dynamic playmaker with great vision and the ability to make game-changing passes.

Andres Iniesta is the fifth-best right-footed soccer player. Iniesta, one of the best midfielders of all time, was a joy to watch. On the football field, Iniesta was lyric in action. It was magical how Iniesta caressed the ball before passing it. During his time with Barcelona and Spain, he was simply electrifying. His exceptional dribbling abilities, which included precise touches and body feints, enabled him to outrun defenders. Iniesta played an important role in Spain’s World Cup victory in 2010. Iniesta scored the winning goal for Spain against the Netherlands in the 2010 World Cup, which remains Spain’s only World Cup victory.

Andres Iniesta was also instrumental in Spain’s victories at the 2008 and 2012 Euros. He was also instrumental in introducing the famous tiki-taka style of football to Pep Guardiola’s Barcelona. It’s nearly impossible to get Iniesta to drop the ball. Because of his intelligence, agility, vision, balance, and technical ability, he was a world-class player. Iniesta is the most promising active player who never won the Ballon d’Or. In 2010, he finished second, and in 2012, he finished third.

Read also- Footballers with most trophies: Which Player Has Won Most Trophies In Football

Alfredo Di Stefano was a forward in his football career. He is one of the greatest soccer players of all time. Di Stefano’s career peaked at Real Madrid, where his stats were phenomenal, earning him the title of a club legend. After winning eight championships in eleven seasons and scoring 308 official goals, he became a symbol of the club and a fan favorite. His performances in the European Cup Finals were especially noteworthy, as he scored in all of them.

Franco Baresi is one of the best center-backs in world football history. Baresi was so good that he once finished second in the Ballon d’Or rankings, which is unusual for defenders. The Italian international spent his entire career in Serie A, spending 20 years with AC Milan, where he captained the club for 15 seasons.

The Italian’s key strengths were his incredible pace, agility, and right foot. He had a magical right foot and the speed and agility to make the recovery runs as a defender. During their time at AC Milan, Baresi and Maldini formed a defensive partnership that allowed only 23 goals in 196 games.

David Beckham is the greatest English football player of all time. The former England international possessed a rocket right foot and was sensational from set-pieces. He will be remembered for his iconic free-kick against Greece, which propelled England to the World Cup final. Because of an unrivaled right foot that packed unrivaled precision and significant impact, the England international enjoyed a sparkling career in five nations with some of the world’s best teams.

David Beckham scored 114 goals and had numerous assists during his career with various clubs, all without using his left foot. Beckham has previously represented Manchester United, AC Milan, PSG, Real Madrid, and the England national team. Beckham is undoubtedly one of the top ten best right-footed footballers in history.

Ronald Koeman is one of the greatest right-footed footballers of all time. Koeman is a Barcelona legend and widely regarded as the best scoring football defender of all time. Being a defender entails a great deal of responsibility and they are not supposed to score goals (for the most part). Ronaldo Koeman, on the other hand, was a defender with a keen eye for a goal. The former Barcelona and Netherlands center-back is the greatest scoring defender of all time, having scored more than 200 goals in over 600 appearances thanks to an absolute rocket of a right foot. He helped Netherlands and Barcelona from his right foot, particularly from set-pieces.

Read also- Top 10 Best Football Referees Of All Time | Who is the world’s best football referee?

Mauro Silva was a talented defensive midfielder who represented Brazil at the international level. He was best known for his time with Deportivo, where he was a tireless worker with exceptional stamina, tackling ability, and leadership qualities. Mauro Silva had an incredible right foot and used it to tackle with precision. Silva had a successful La Liga career with Deportivo. He played 458 games in 13 La Liga seasons, scoring one goal and winning six major trophies. Mauro Silva also helped Brazil win the World Cup in 1994 and Copa America in 1996. At the end of the 2005/06 season, the Brazilian announced his retirement from active football.

We hope you enjoyed our article on the list of top 10 best right-footed players in football history. Please drop your opinions in the comment box. The information for this article is acquired from Wikipedia. Since this topic is subject to change, our website provides no guarantee for the accuracy of the information.