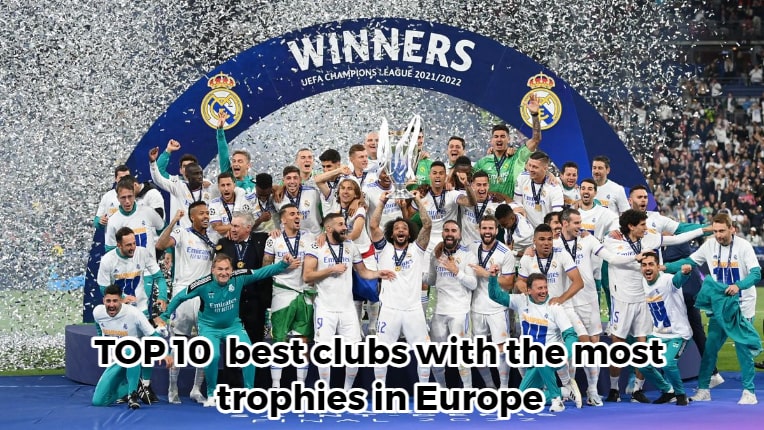 Real Madrid leads the pack when it comes to clubs with the most trophies in Europe, with 96 trophies to date, European football is the most competitive. Domestic clubs compete for local and European glory every season, despite being spread across the continent and dominated primarily by six countries.

Real Madrid has risen above the rest and truly established themselves as true European giants. The Champions League has been won by the world’s best clubs. Few, however, have accomplished the feat more than once. Here are the ten most successful European football clubs in terms of major trophies won:

Top 10 Clubs With the Most Trophies in Europe

Real Madrid has 96 trophies to its name. The current Champions League winner Real Madrid is the most successful club in European Cup/Champions League history, having won the tournament 14 times, including the first five editions and eight more in the Champions League era. The Spanish giants won back-to-back UEFA Cups in the 1980s and have also won four UEFA Super Cups. Madrid has three Intercontinental Cup titles and four Club World Cup titles. They have 35 domestic titles to their name, as well as 19 Spanish Cups, 12 Spanish Super Cups, and one victory in the now-defunct Spanish League Cup.

They have won the European Cup/Champions League five times, as well as four Cup Winners’ Cups, three Fairs Cups, and five UEFA Super Cups. Barcelona has won the Spanish Cup an unprecedented 31 times, the Spanish Super Cup 13 times, and the Spanish League Cup twice in Spain. They have also won the Club World Cup three times and were the first club to win six trophies in a calendar year in 2009.

FC Bayern Munich is a German football club with a long history. Bayern Munich has won 81 trophies – The kings of German football have won the Bundesliga 32 times and the German Cup 20 times. They also won six times in the now-defunct German League Cup and nine times in the German Super Cup. Bayern has won six European Cups/Champions Leagues outside of Germany, including three in a row in the mid-1970s.

They have won every European trophy, including the Cup Winners’ Cup, UEFA Cup, and two UEFA Super Cups. Bayern has also won the Intercontinental Cup twice and two Club World Cups, making it the only German club to do so.

SL Benfica won the most domestic league titles in Portugal, with 37. They haven’t been able to replicate their recent domestic form in Europe; they’ve only won the European Cup twice, in 1960/61 and 1961/62. Benfica and Porto continue to be two of Europe’s best sides, consistently producing some of the best young South American footballers in the world. Their scouting system in Latin American leagues is unrivaled, and they thrive domestically by selling off incredibly talented footballers.

Porto is one of Portugal’s “Big Three,” along with Lisbon rivals Benfica and Sporting CP. With 79 official trophies, they are the second most decorated team in Portugal. The majority of them came from domestic competitions, including 30 league titles (five of which were won in a row between 1994–95 and 1998–99, a Portuguese football record). Their most recent UEFA Champions League victory came in 2003/04 when they defeated Monaco in the final 3-0.

The only Dutch club on this list is the incredibly well-known AFC Ajax. They have won the Eredivisie 36 times, making them the club with the second-most domestic league titles on this list. That’s on top of 20 Dutch Cups, four UEFA Champions Leagues, and one UEFA Cup. Under manager Frank de Boer, the Dutch giants won the domestic title four years in a row from 2011 to 2014. They won the UEFA Champions League for the last time in 1994/95.

The Juventus club is the most successful Italian football club in the sport’s history. Juventus has won 70 trophies, including 36 Serie A titles. They’ve also won 14 Italian Cups and nine Italian Super Cups. The Old Lady holds the complete set of European Cups, three UEFA Cups, one Cup Winners’ Cup, and two UEFA Super Cups. They were also world champions twice, winning the Intercontinental Cup in 1985 and 1996.

After Manchester United, the only other English team on this list is their archrival, Liverpool. The Reds have 69 trophies to their name. They have six European Cups, making them the most successful English club in European football. In addition, the Reds have won three UEFA Cups and four UEFA Super Cups. Liverpool has won 19 Premier League titles, eight FA Cups, a record nine League Cups, and 15 Charity/Community Shields. The Reds won the Premier League title for the first time in 30 years in the 2019/20 season. In 2019, they also won the FIFA Club World Cup.

Sir Alex Ferguson, the former manager of the Premier League giants, has redefined success in recent decades. Manchester United has 68 trophies – The Red Devils are one of England’s most successful clubs, having won 20 top-flight titles, including 13 in the Premier League era. United has won a record 12 FA Cups, five League Cups, and 21 Charity/Community Shields. In 2017, they added the Europa League to their three European Cups/Champions Leagues, Cup Winners’ Cup, and UEFA Super Cup. United is the only English club to have won the Champions League, the domestic title, and the main domestic cup all in the same season. The Red Devils are the only English club to have won any international titles. They won the Intercontinental Cup in 1999 and the Club World Cup in 2008.

Milanese giants AC Milan are one of only two Serie A teams on this list. AC Milan has collected 52 trophies. They are second only to Real Madrid in terms of European Cup/Champions League victories. They have won the European Championship seven times. In 1963, they won their first competition. The last time they won the Champions League final was in 2007. Until Real Madrid’s triumph in 2017, Milan had been the last club to successfully defend the European Cup, having won it back-to-back in 1989 and 1990. AC Milan ranks 10th on the list of clubs that have the most trophies in Europe

Read also- How many Champions League finals has Real Madrid won since 1956?

We’ve done extensive research and compiled a list of the top 10 clubs with the most trophies in Europe. We hope you enjoyed the article and would love to hear your feedback in the comments section below. All information for this article was sourced from Wikipedia and other reliable sources. The accuracy of the information on our website is subject to change, as the club’s trophy count is updated regularly. Please comment below if we have missed any.