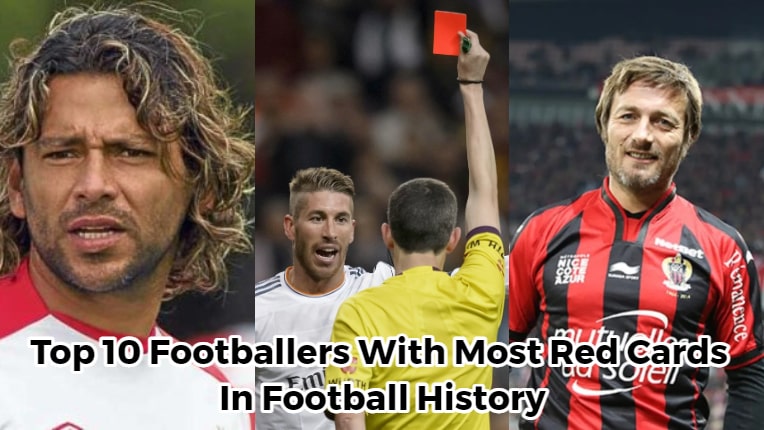 Many players throughout football history have received yellow or red cards for making mistakes on the field. The officials use the red card to remove a player from the game. It means the player will be ejected automatically, and the player’s team will be shorthanded for the rest of the game. Interestingly, the top 5 players like Gerardo Bedoya received 46 red cards during his career, Sergio Ramos received 27 (second most red cards in football history), Cyril Rool received 27, and Alexis Ruano Delgado received 22, and Paolo Montero got 21 red cards.

Why would a football player get a red card?

A player who has committed a serious offense, such as violent conduct or an illegal and purposeful obstruction of an opposing team’s goal-scoring opportunity, will be shown a red card (Penalty card). A player who receives two yellow cards for minor offenses will also receive a red card. This article is about those footballers who have received the most red cards throughout the history of the game.

Who Are The Top 10 Soccer Players With The Most Red Cards In Football History?

Gerardo Bedoya is a former Colombian football player. He started as a defender but also played defensive midfield. He is known as “the Beast,” and he currently holds the record for the most red cards (46) received by any player in football history. Interestingly, he was dismissed after only 21 minutes of his senior coaching debut in March 2016.

Sergio Ramos and red cards have always been synonymous. The Spanish defender has been a standout performer throughout his career and continues to be a force on the field. It would be a crime to compile a list of footballers with the most red cards that did not include Sergio Ramos. The former Real Madrid defender is well-known for his gritty work and strong personality. He currently holds the record for the most red cards in La Liga history (21). In December 2021, the Spanish soccer player received the 27th red card while playing for his PSG career. Having said that, Ramos has always tended to be rash and reckless on the field. He enjoyed picking fights with the opposition, which frequently resulted in his dismissal.

Cyril Rool ranks 3rd on the list of most red cards in football history. He was born in the Vaucluse town of Pertuis. The very tough midfielder has played for some top French clubs, including Marseille, and has reached the French Cup final on several occasions. Many people will remember him for his ruthless play, blind tackles, and being at the centre of on-field brawls. He is evidenced by a career total of 25 red cards and 187 yellow cards before the 2009–10 season, a record in the French championship. Of course, Rool didn’t always follow the rules throughout his lengthy career, as evidenced by his card count.

Read also- Top 10 Best Football Referees Of All Time | Who is the world’s best football referee?

Alexis is a Spanish footballer who primarily plays as a central defender but can also play as a full-back. Over 15 seasons, he appeared in 321 La Liga matches and scored 17 goals for Malaga, Getafe (twice), Valencia, Sevilla, and Alaves. On the field, Delgado is known for his aggression and fiery temper. However, the Spanish defender will be remembered for punching Mario Mandzukic. Throughout his career, Alexis has received 22 red cards.

Fans’ favorite soccer player is Paolo Montero. The Uruguayan has received the most red cards in Serie A football history. Paolo Montero was a Juventus player who believed in winning at any cost, even if it meant committing fouls. From 1996 to 2005, the Uruguayan defender was a stalwart in the Bianconeri backline, appearing 278 times in the famous black and white jersey and winning ten trophies with the club, including five Serie A titles.

Rafa Marquez, a former Red Bulls defender, has a long rap sheet when it comes to US players in international soccer and Major League Soccer. Marquez is widely regarded as Mexico’s best defender. He head-butted Jones in the waning minutes of Mexico’s humiliating World Cup 2-0 loss to the United States in 2002. Marquez went studs up into the goalkeeper during a 2-0 World Cup qualifying loss to the United States in Columbus, Ohio in February 2009. Marquez slammed defensive partner Tim Ream’s “infantile” play in October 2010, earning the ire of fans and the media. He also won numerous club titles with Monaco and Barcelona. In addition to his on-field brilliance, the legendary center-back was issued 21 red cards.

Felipe Melo is a Brazilian professional footballer who currently plays for Fluminense as a defensive midfielder. The defensive midfielder was involved in a brawl in 2017 that resulted in the suspension of four players from future games. Felipe has 20 career red cards, living up to his nickname “Pitbull.” The Brazilian has the stamina of an MMA fighter.

Matteo Contini is an Italian football coach and former defender who has played for clubs such as Napoli, Parma, and Real Zaragoza in Spain. Contini was a highly regarded player during his time, but he struggled to avoid punishment on the field. He ranks 8th on the list of most red cards in football history with 20 red cards.

Fernando Amorebieta was a Fulham central defender from 2013 to 2016. He is a Venezuelan international who spent eight years at Athletic Bilbao before returning to his homeland to join Sportin Gijon after leaving Craven Cottage. Fernando is one of the veteran soccer players who have received multiple red cards during their careers. The Venezuelan-born footballer spent the majority of his career as a central defender for Athletic Bilbao and Fulham. With 19 red cards, Fernando ranks ninth all-time in football history.

Gary Medel is a Chilean professional footballer who plays as a centre-back and defensive midfielder for the Italian club Bologna and the Chile national team. He has established himself as one of the most difficult defenders that few strikers want to face. Unfortunately, his ability to make critical stops and tackles has cost him 18 marching orders during his career.

What is the red card rule in football?

A referee will display a red card to indicate that a player must be sent off. A player who is sent off must immediately leave the field of play, take no further part in the game, and cannot be replaced by a substitute, forcing their team to play with one fewer player.

What is a yellow and red card in football?

A player who has been cautioned may continue to play in the game; however, a player who receives a second caution in a match is sent off (shown the yellow card again, followed by a red card), which means they must leave the field immediately and take no further part in the game.