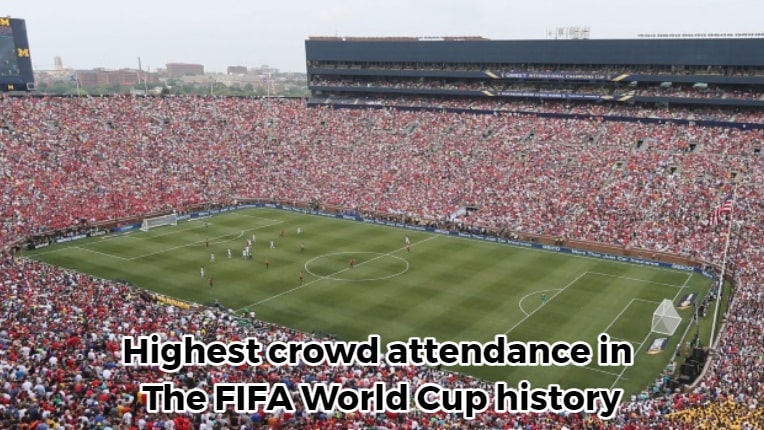 The FIFA World cup is an international football competition conducted once every four years, so we’ve listed the 10 highest crowd attendance in The FIFA World Cup history. It’s a tournament where the men’s national teams of the Federation of the International Football Association. Initially, there were 13 teams. Over a period the numbers have gradually increased. At present, there are 32 teams.

The first FIFA World Cup was held in 1930, with Uruguay serving as the host nation. Uruguay became the first country to win the World Cup with 13 teams competing. Soccer is one of the most popular sports in the world, so you can imagine the number of fans it has. Here is a list of the ten FIFA World Cups with the highest crowd attendance, with the 1994 World Cup (host – USA) at the top of the list.

The 1994 World Cup in the United States of America is at the top of the list. This tournament featured 24 teams. It established a record of 3.5 million crowd attendance with 68,991 attendance per game, which is still unbroken to this day. Brazil and Italy competed in the finals. Brazil has been crowned champions after defeating Italy 3-2. It was the first time a world cup final was decided by a penalty shoot-out.

The 2014 FIFA World Cup drew the second-highest crowd. It took place in Brazil. The tournament drew 3.4 million spectators, with an average attendance of 53,592 per game. The fans regarded it as the greatest World Cup edition. The tournament featured 32 teams in total. Germany won the tournament after defeating Argentina 1-0 in extra time.

Italy won its fourth world cup title in 2006, defeating France 5-3. This year, 32 teams competed. The total attendance was 3.4 million, with 52,491 people attending each game. It was the most-watched television event in history. The 2006 World Cup was estimated to have been viewed 26.29 billion times by 751 million people worldwide.

South Africa hosted the 2010 FIFA World Cup. The attendance was 3.2 million, with 46,670 people attending each game. The final was contested by Spain and the Netherlands. Spain defeated the Netherlands (who had previously lost in the finals three times) 1-0. It was Spain’s first World Cup victory. In addition, Spain became the eighth country to win a world cup hosted outside of its continent.

This was expected to be the most expensive Football World Cup in history. This tournament cost a total of 14.2 billion dollars. With 47371 spectators per game, the 2018 World Cup drew over 3 million people. Russia hosted the event. France won their second World Cup title with a 4-2 victory over Croatia. Luka Modric, a Croatian player, was voted the best player and received the golden ball.

The host country France won the 1998 World Cup by defeating Brazil 3-0. It was their first world cup championship. The competition drew 2.8 million spectators, with 43,511 people attending each game. The number of teams participating has increased from 24 to 32. The first and final games were held at the Stade de France, a newly constructed stadium. Croatia and the Netherlands took third and fourth place, respectively.

The 2002 FIFA World Cup was held in Japan and South Korea. However, the final was held in Japan, and Brazil won 2-0 after defeating Germany. Brazil is the only team to have won five World Cups. The crowd attendance was estimated to be 2.7 million, with 42,269 people attending each game. The 2002 FIFA World Cup was the first to be held in Asia. Even though it was only their second world cup, Turkey finished third. They also broke the record for the fastest goal in FIFA World Cup history, scoring 10.8 seconds after kickoff. Ronaldo was the tournament’s leading scorer.

In terms of games, the 1990 World Cup is still regarded as the worst ever. It has the lowest goal-scoring average in the league, averaging 2.2 goals per game. It also holds the record for the highest red cards issued to players, as well as the first-ever finals dismissal. However, it drew 2.5 million spectators, with an average of 48,389 per game, and finished in the top ten of this list. West Germany won the competition with a 1-0 victory over Argentina. West Germany won their third FIFA World Cup.

The 1986 FIFA World Cup was held in Mexico. The total attendance was 1.85 million, with 46,039 people attending each game. Argentina won their second FIFA World Cup, defeating West Germany 3-1. Argentina’s captain, 25-year-old Diego Maradona, made a significant contribution to the victory. Diego Maradona scored the goal that became known as the “hand of God.” In the 1986 FIFA World Cup, his other goal was named the goal of the century. He also received the Golden Ball for being the best player in the 1986 World Cup. This tournament is also credited with popularising the Mexican handwave.

The 1982 World Cup in Spain is the final one on our list. The 12th FIFA World Cup drew 1.85 million spectators, with 40,572 people in attendance. Italy won the championship after a 3-1 victory over West Germany. It was Italy’s third FIFA World Cup victory. One of the games resulted in a shootout. It was the first penalty shoot-out since the World Cup began. Poland and France took third and fourth place, respectively.

Learn more about: Most expensive player transfers of the 2022 January window for football’s most valuable clubs.

We hope you enjoyed our article on the ten most crowded FIFA World Cup stadiums in history. Please share your thoughts in the comments section below. This page’s content is subject to change at any time. Our website (www.footballtipmaster.com) makes no guarantees about the information’s accuracy.