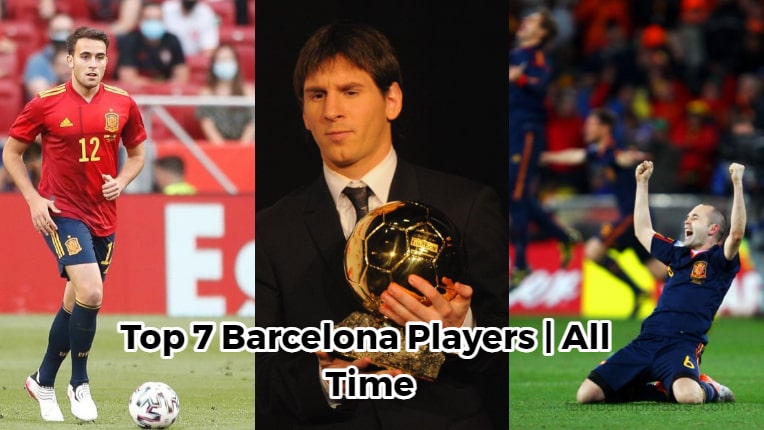 Read this article to get more ideas about the top 7 Barcelona players of all time. The Club, Barcelona has many greatest players of all time in the football game’s history. Barcelona football club also known as Barca was founded on 29th November in the year 1899. The football ground of this football club is called Camp Nou and is situated in Barcelona, Spain. The Barcelona Dream Team under the popular football star, Johan Cruyff made this club more famous and successful. The club members won 4 league titles consecutively, and 1 Champions League.

Lionel Andres Messi was born on 24th June 1987. His place of birth is in Rosario, Santa Fe of Argentina. He plays in the position of a forward for the Ligue 1 club Paris Saint-Germain. When he was 13 years of age, he relocated to Spain for joining Barcelona. He started his senior professional football career in 2003 with Barcelona. He is the captain of the Argentine football team and the leading goalscorer of all time for Argentina’s national team.

Awards won by Lionel Messi and his other accomplishments

At the junior level, he managed to win the 2005 FIFA World Youth Championship. He also won both the Golden Ball and the Golden Shoe. Messi is an Olympic gold medal winner at the Summer Olympics of 2008. His left-footed dribbling style drew comparisons to his fellow countryman Diego Maradona, who defined Messi as his successor.  After making his senior debut in August 2005, Lionel became the youngest Argentine to perform and win in the FIFA World Cup in 2006. Also, he made it to the final of the 2007 Copa América. He got the title of the tournament’s young player in that match.

2. Andres Iniesta (One Of The Top 7 Barcelona Players)

Andres Iniesta was born on 11th May 1984. His place of birth is in Fuentealbilla located in Spain. He assisted Spain in winning the 2008 and 2012 Euro Cup, and also the 2010 World Cup. Indeed, Andres is regarded as one of the greatest midfielders of all time. He began his senior professional soccer career with Barcelona in 2011. In 2012, he clinched the UEFA Best Player in Europe Award. In 2012 and 2013, he also got the title of the IFFHS World’s Best Playmaker. Andres became the runner-up to Messi in the FIFA Ballon d’Or prize of 2010. Also, he accomplished the 3rd position in the year, 2012.

Other achivements of Andres Iniesta

Before actually making his global debut in the year 2006, Iniesta represented Spain at the Under-21, Under-19, and Under-16 levels. He was chosen for Spain’s Team of the Tournament, as he assisted his nation in winning the UEFA Euro 2008. Iniesta was also a prominent player on Spain’s World Cup-winning team in 2010. Andres scored the game-winning goal in the final in opposition to the Netherlands. Thus, he got the title of the Man of the Match. Also, he got selected to the championship’s All-Star Team. Furthermore, Andres led Spain to their 2nd consecutive continental title at UEFA Euro in the year,2012. Therefore, he got the title of the Man of the Match in the finals in opposition to Italy. Moreover, he also received the Player of the Tournament prize.

The date of birth of Luis Alberto Suárez Díaz is on 24th January 1987. His place of birth is Salto located in Uruguay. From 2014 to 2020, he played for the Barcelona club. He made his international senior professional football career debut with the club, Nacional in the year, 2005. From the year, 2020, he is playing in the position of a striker for the football club, Atlético Madrid in Spain. Luis also plays for the Uruguay national squad. At the club level, he was won the UEFA Champions League, and also the Copa America tournament while playing for Uruguay. In total, he has scored more than 500 goals.

4. Ronaldinho(One Of The Top 7 Barcelona Players)

The date of birth of Ronaldo de Assis Moreira is on 21st March 1980. His place of birth is in Porto Alegre, Brazil. He plays in the position of an attacking midfielder and has also played as a winger. Moreira won 2 FIFA World Player of the Year prizes. And, he also won the Ballon d’Or award in the year, 2005. Ronaldinho started his international football career with Gremio. Then he played with the PSG from 2001 to 20003. Also, Ronaldinho played for the Barcelona club from 2003 to 2008.

The date of birth of Ronald Koeman is 21st March 1963. His place of birth is Zaandam in the Netherlands. He played in the position of a defender and midfielder. He was the manager of the La Liga Club, Barcelona from the year 2020 to 2021. Ronald was victorious in the UEFA Euro championship of the year, 2008. He was also the captain of his squad in the FIFA World Cup of 1994.

6. Johan Cruyff (One Of The Top 7 Barcelona Players)

Johan Cruyff was born on 25th April 1947 in Amsterdam, located in the Netherlands. Earlier, he was the Ballon d’Or prize winner 3 times – 1974, 1973, and 1971. Johan was listed in the FIFA 100 World’s greatest living players. Johan played his professional football with the club, Barcelona from 1973 to 1978. While playing with the club Ajax, he won 1 Intercontinental Cup, 8 Eredivisie titles, and 3 European Cups.

Gerard Pique Bernabe was born on 2nd February 1987 in Barcelona, Spain. He plays in the position of a center-back. Presently, he is playing for the La Liga Club, Barcelona. Indeed, Gerard is regarded as one of the best goal-scoring defenders in the football game. He is one among the sportspersons who have won the UEFA Champions League for 2 years consecutively for separate football squads. He made significant contributions to the Spanish squads that won the FIFA World cup in 2010, and the UEFA Euro prize in 2012.

You can also read this article to get knowledge about the Greatest GoalScorers in FA Women’s Super League | All Time.

We hope you enjoyed our article on the top 7 Barcelona Players | All Time. Please drop your thoughts in the comment box. The information for this article is acquired from bleacherreport.com. Since this topic is subject to change, our website (www.footballtipmaster.com) provides no guarantee for the accuracy of the information.