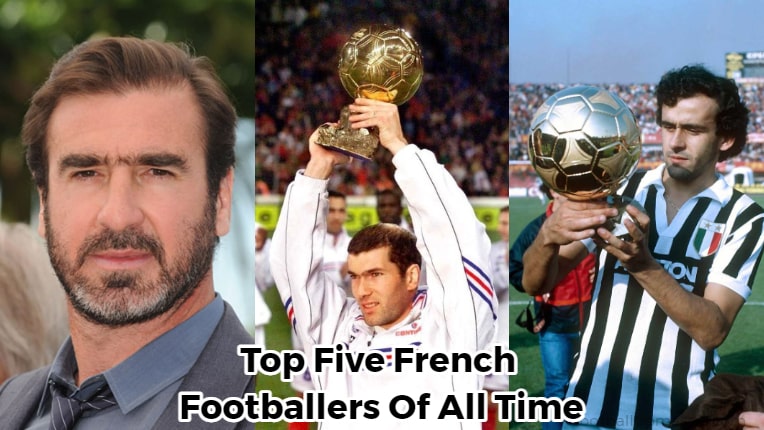 1. Zinedine Zidane (The Best Among The Top Five French Footballers Of All Time)

Zinedine Yazid Zidane’s date of birth is 23rd June 1972. He was born in La Castellane, Marseille, in Southern France. Zidane is fondly known as Zizou. He played the role of an attacking midfielder. Moreover, Zinedine Zidane was the coach of the club of Spain, Real Madrid. He is one of the best football players on the international level. Zidane is also one of the top ten French footballers of all time.

Because of Cantona’s lengthy suspension, Zidane was given his chance in the French team. And, he did not even give them a chance to repent their decision of including him in their team. He helped France to win over Brazil by 3-0 in the 1998 World Cup final, totally outshining his major competitor Ronaldo. Also, he scored the Golden goal in the semifinals of the Euro championship of 2000. Thus, he helped his French national team win.

He won the Ballon d’Or prize in 1998. Zidane also got the title of FIFA World Player of the Year in 2003, 2000, and 1998. He began his career at Cannes. Then, he successfully became one of the best players in the French Ligue 1 and Bordeaux. Indeed, he won the Golden Ball for the Player of the Tournament at the World Cup of 2006. He also received the title of La Liga. Also, he won in the UEFA Champions League. He was victorious in the UEFA Euro 2000. There, he got the title of the Player of the Tournament. He also got the award of the Best FIFA Men’s Coach in the year 2017. He received the Knight of the Legion of Honour in 1998.

2. Michael Platini ( One Of The Top Five French Footballers Of All Time)

Michael Platini’s date of birth is on 21st June 1955. Platini was born in Joeuf of France. He is the sixth President of the UEFA (Union of European Football Associations) from 2015. He is indeed one of the best football players of all time. Furthermore, he won the Ballon d’Or award 3 times – 1983, 1984, and 1985. Owing to his achievements, he even received the title of Chevalier of the Legion of Honor in the year 1985.

Platini was a football sportsperson for the clubs – Saint-Étienne, Juventus, and Nancy. He won the UEFA Player of the Tournament prize in 1984. Indeed, he won the French player of the century award in 1999. Also, he got the honor of the Italian Football Hall of Fame in 2011. Platini played as an attacking midfielder.

3. Raymond Kopa (One Of The Top Five French Footballers Of All Time)

Raymond Kopa’s date of birth is 13th October 1931. Kopa took birth in Nœux-les-Mines of France. He played as an attacking midfielder. Likewise, he was a good footballer in dribbling art. Furthermore, he won the Ballon d’Or prize in 1958. Also, Raymond was the first footballer to get the Legion of Honor in 1970. At a FIFA prize-giving function, Pele referred to him as one of the 125 Greatest Living Footballers. The Kopa Trophy (started in his honor) was given to the best young football player in France annually from  2018. Kylian Mbappé, a French footballer, was the first to receive the award afterward.

Just Louis Fontaine was born on 18th August 1933. His place of birth is Marrakech, in Morocco of France. He is famous for scoring many goals in one FIFA World Cup. Also, he scored 13 goals in 6 tournaments in the year 1958. In a prize-giving ceremony of FIFA, Pele indeed referred to him as one of the 125 Greatest Living Footballers. In the match of 17th December 1953, where France won over Luxembourg 8-0, he had even scored a hat trick there. He received the Golden foot prize in 2003. Also, he won the FIFA World Cup, Golden Boot, in 1958. He played as a forward in all the football matches.

The date of birth of Eric Daniel Pierre Cantona is on 24th May 1966. Eric’s place of birth is in Marseille of France. He won 4 Premier League titles, 2 leagues, and FA Cup doubles. Eric Cantona was fondly known by his football fans as “King Eric”. He was born in Marseille, France. Moreover, he was victorious in the FIFA Beach Soccer World Cup of 2005. He was very much interested in beach soccer. Also, he was a player-manager in the national football squad of France.

Moreover, he was considered in the Premier League Hall of Fame in 2021. Pelé titled him to the FIFA 100 list of the world’s greatest living players in 2004. Also, he won the UEFA President’s Award in 2019. Furthermore, he won the Ballon d’Or prize in 3rd position in 1993. Eric won the Onze d’Or award also in 1996.

We hope you enjoyed our article on the Top Five French Footballers Of All Time | Updates. Please drop your thoughts in the comment box. The information for this article is acquired from bleacherreport.com. Since this topic is subject to change, our website (www.footballtipmaster.com) provides no guarantee for the accuracy of the information.