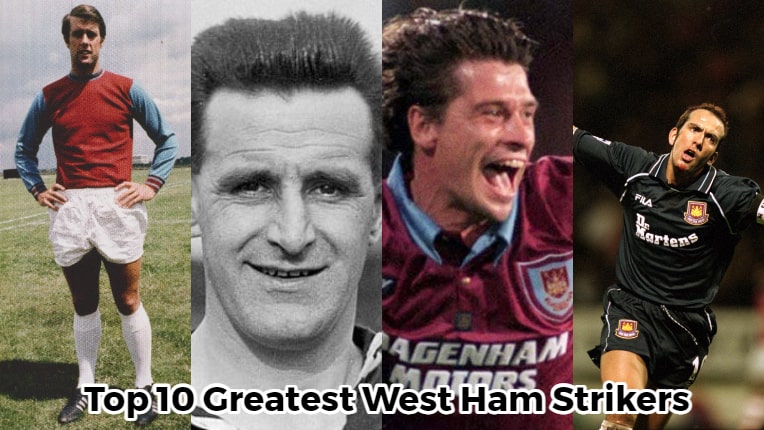 West Ham United F.C. has produced some of the best West Ham strikers over the years. These players have made significant contributions to the team’s success since the club run in all the competitions.

Who is West Ham’s best player?

Billy Bonds holds the record for most games played in West Ham history, which no other player has come close to breaking. His Hammers career began in 1967 when he joined the club from Charlton Athletic. He went on to make 793 first-team appearances for the club, scoring 59 goals along the way.

Despite the difficulties on the field, West Ham’s fanbase is widespread and frequently praised. Although our football is frequently inadequate, West Ham fans are known for their passion and volume. With a long list of top West Ham strikers, we also have our fair share of famous fans. Let us take a look at some of the top ten West Ham strikers of all time in this article.

Sir Geoff Hurst is one of west ham best players ever and the most prolific goal scorer. He is the only player to ever score a hat trick in a World Cup final. Sir Geoffrey Hurst MBE is a former English professional footballer. He is the only man to have scored a hat-trick in a World Cup final when England defeated West Germany 4–2 at Wembley Stadium in 1966. Geoff may be well-known to football fans around the world for his role in England’s World Cup-winning team in 1966, but he is much more to West Ham fans.

He was one of West Ham United’s greatest players, scoring 249 goals for the club. The three-time Hammer of the Year was instrumental in West Ham’s first-ever FA Cup victory in 1964. Sir Geoff Hurst joined West Ham and England heroes Bobby Moore and Martin Peters in the ‘The Champions’ statue outside the Boleyn pub near Upton Park in 2003.

Victor Watson was an English footballer who spent the majority of his career with West Ham United F.C. He played for West Ham from 1920 to 1936 Watson is the club’s all-time leading scorer, with 326 goals in the league and 28 in the FA Cup. From 295 top-flight appearances, he scored 203 league goals. He scored six goals in an 8–2 home win over Leeds on 9 February 1929, four goals on three occasions, and 13 hat-tricks while at West Ham. In 1930, he led the first division in scoring. Vic Watson led West Ham to the FA Cup final in 1923, where they were defeated 2-0 by Bolton in the first-ever game at the old Wembley Stadium. Vic Watson is unquestionably one of the greatest West Ham strikers of all time.

Tony Cottee is a former English football player and manager who now works as a football commentator on television. Cottee, a true Hammer, made his debut at the age of 17 in 1983, scoring against Tottenham. He had two prolific spells with the club, from 1982 to 1988 and 1994 to 1996, scoring 146 goals in 336 appearances. From 1982 to 2001, he was a striker in the English Premier League, most notably for West Ham United, Everton, and Leicester City.

Paolo Di Canio is an Italian former football player and manager. During his playing career, he made more than 500 league appearances and scored over 100 goals as a forward. He was primarily a deep-lying forward, but he could also play as an attacking midfielder or a winger. Di Canio’s explosive yet fun-loving personality is probably the reason he is one of the best West Ham players. He is West Ham’s most modern icon, emulating the style and skill seen throughout football’s modern era of the Premier League. Paolo Di Canio was called Hammer of the Year in 2000. He scored 51 goals in his 141 games for the club.

Pop Robson is a former English footballer who played as a center-forward. He scored 265 goals in 674 league games for Newcastle United, West Ham United, Sunderland, Chelsea, and Carlisle United. Pop Robson joined the Hammers in February 1971 for a club-record £120,000 fee from Newcastle United. Robson played for the Hammers twice, once after his northeast departure after nine years on Tyneside, and once between 1976 and 1979. Robson made 255 appearances for West Ham during his two stints, scoring 104 goals. In 1973, he was named Hammer of the Tear and the League’s leading scorer. He also had one under-23 cap for England.

Johnny Byrne was a striker for the English football team. Because of his constant chattering, he was called “Budgie.” Johnny Byrne, one of West Ham United’s greatest strikers, joined the club from Crystal Palace in 1962. Signed for £65,000 in March 1962, Byrne struggled to translate his prolific form to the First Division, scoring just once in his first eleven appearances, but he settled into life in the top flight during the 1962/63 season. Before signing a professional contract with Crystal Palace in 1956, he played non-league football for Epsom Town and Guildford City Youth. Between 1962 and 1967, he scored 108 goals in 206 appearances. Also, was named Hammer of the Year in 1964.

Trevor Morley is an English football manager, former football player, and pundit. He was a striker who played for Manchester City and West Ham United in the Premier League. Trevor Morley joined the West Ham club from Manchester City and played for them for six seasons between 1989 and 1995. West Ham finished 13th in their first Premier League season, with Morley again leading the way with 16 goals in 49 games. He was named Hammer of the Year in 1994.

Carlos Tevez is an Argentine footballer. He last played for Boca Juniors. Tevez, a quick, tenacious, powerful, hardworking, and dynamic forward in his prime, can play as a striker, winger, supporting forward, or attacking midfielder. Tevez has his dedication to West Ham, without Tevez, West Ham would have stood relegated to the Championship in 2006-07.

He single-handedly saved West Ham from relegation, scoring seven goals in the final stages of the season, including the game-winning goal against Manchester United on the final day of the season. West Ham stunned the football world by signing Argentinians Carlos Tevez and Javier Mascherano from Brazilian club Corinthians for undisclosed fees. Tevez’s place on this list is fully justified when you consider his Hammer of the Year award. He is one of West Ham’s all-time great strikers.

David Cross is a former English footballer. He was a striker who scored 223 goals in 599 Football League and North American Soccer League appearances. Cross was born in the Lancashire town of Heywood. David Cross was a member of the team that defeated Arsenal in the historic 1980 FA Cup Final, and he won the Golden Boot in the 1980-1981 season. David Cross joined the club from West Brom in 1977 for a club-record fee of £180,000. In 227 games, he scored 97 goals for the West Ham club.

Michail Antonio is a Jamaican footballer who plays as a forward for Premier League club West Ham United and the Jamaica national team. When he joined the Hammers for £7 million from Nottingham Forest in 2016, he was clearly defined as a winger.

He has played in a variety of positions since then, including right-back, right midfielder, and winger, before eventually establishing himself as the club’s main striker. Antonio began his career at non-league Tooting & Mitcham United before joining Championship club Reading in 2008. He is one of West Ham’s top Premier League scorers. Antonio was also named Hammer of the Year for his work in 2016-17.

We hope you enjoyed our article on the list of the top ten greatest West Ham United strikers of all time. Please drop your opinions in the comment box. The information for this article is acquired from West Ham United F.C. Since this topic is subject to change, our website provides no guarantee for the accuracy of the information.