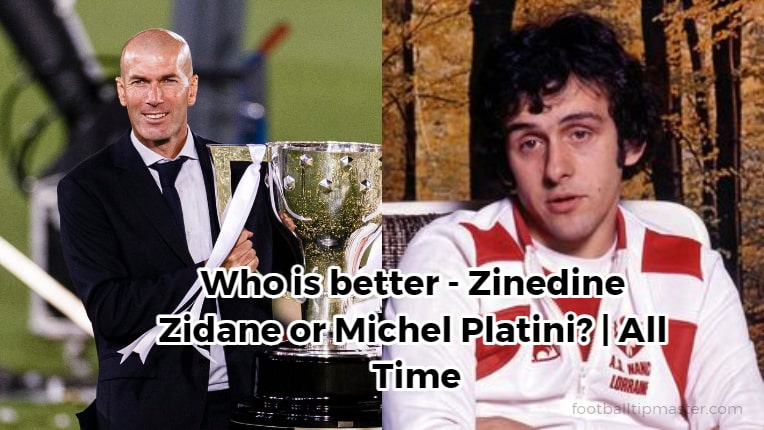 Zinedine Zidane and Michel Platini both are France’s best football players of all time. They are also famous footballers at the international level. Platini won the Ballon d’Or award 3 times in total. And, Zidane got the title of FIFA World Player of the Year 3 times. And, they have also won many other important accolades which have made them popular in football history. Continue reading this article to know more about the achievements of Platini and Zidane. Many football fans might be having the question in their minds, Who is better – Zinedine Zidane or Michel Platini? After reading this article, you will be able to get the answer of how Platini is better than Zidane.

Platini is better than Zidane

Platini is better than Zidane because of the following reasons:

Michel Platini played as a famous attacking midfielder in the soccer world. At the world stage, he led the French national squad to the 1984 European Championship. There he scored nine goals and was received the title of the player of the tournament. Also, he helped them in finishing in 3rd position at the 1982 and 1986 World Cups. Moreover, Platini scored 41 goals in 72 performances for France.

Platini won the Ballon d’Or award 3 times. He won the title of the French Player of The Year 2 times. Michel won the European Cup Winner’s Cup prize in the session of 1983-84. He was victorious in the Intercontinental Cup in 1985. Even, he was awarded the French Player of The Year title in 1976 and 1977. Also, he was inducted into the Italian Football Hall of Fame in 2011.

The fans of Zinedine Yazid Zidane or Zinedine Zidane call him Zizou. His date of birth is on 23rd June 1972. His place of birth is Marseille in France. He was a professional football sportsperson who played for the clubs Cannes, Juventus, Bordeaux, and Real Madrid. He played as an attacking midfielder. Recently, he was the coach of the club of Spain, Real Madrid. Globally, he is famous as one of the best coaches.

Zinedine Zidane began his professional football career with the football club, Cannes. He played with the club from 1989 – to 1992. Even, he became one of the best sportspersons in Bordeaux in the French Ligue 1. Zidane played with the club from 1992 to 1996. Afterward, he played for the club Juventus from 1996 to 2001. He started his football coaching at Real Madrid Castilla. In the year 2017, he got the title of Best FIFA Men’s Coach. Furthermore, between 2001 and 2009, he became the most expensive footballer in the soccer game’s history.

Zidane received many individual awards in his lifetime of a football career. He was given the title of the FIFA World Player of the Year in the years 2003, 2000, and 1998. Moreover, Zidane won the  Ballon d’Or prize in the year, 1998. Also, he won 2 Serie A titles with the Italian club. Then, he joined Real Madrid with one of the highest fees of that time, i.e. €77.5 million in the year, 2001. He played with the Spanish club, Real Madrid from 2001 to 2006. In Spain, he won many accolades with that club. He received the La Liga title. Zidane also won the UEFA Champions League.

The legend won the FIFA World Cup of 1998. Zidane also got the Legion of Honour title in the same year. Even, he was victorious in the UEFA Euro 2000 and got the Player of the Tournament award. Also, he got the Golden Ball for achieving the Player of the Tournament award in the World Cup of the year, 2006. He was referred to the FIFA 100 list of the world’s greatest living football players, in 2004 by Pele. Indeed, Zidane is one of the 8 players who have been victorious in the Champions League, the World Cup, and the Ballon d’ Or.

The French magician began to shine afterward in his career. His first big moment came when he was in his 20s, playing for France in the 1998 World Cup in his nation. In that game, he scored a memorable goal in the finals, giving his squad their first World Cup victory ever. Zidane had the chance to be regarded as the greatest player in history, or at least in comparison with Pele, Maradona, Ronaldo, or Messi. But, in the 2006 final against Italy, he made an infamous headbutt to Marco Materazzi. After this, the championship trophy was proficiently handed over to the Italian team after he was sent off. Irrespective of this gaffe, the French continue to consider Zidane as the greatest sportsperson they have ever had.

Michel Platini is better than Zidane

Michel Platini was famous in his time before Zidane. Earlier, he had a golden period with Italian club Juventus and had won many significant individual awards. But his most incredible time came in the European Championship of the year 1984. As he won for France, thus rapidly he got elevated to the designation of France’s most revered player. Likewise, Platini proved to be the best football superstar until Zizou entered the discussion. But, he is still France’s most lauded soccer player of all time. Therefore, we can say that Platini is better than Zidane.

Go through this article if you would like to get knowledge about the top ten most iconic football stadiums around the world.

We hope you enjoyed our article on who is better – Zinedine Zidane or Michel Platini? | All Time. Please drop your thoughts in the comment box. The information for this article is acquired from bigsoccer.com. Since this topic is subject to change, our website (www.footballtipmaster.com) provides no guarantee for the accuracy of the information.