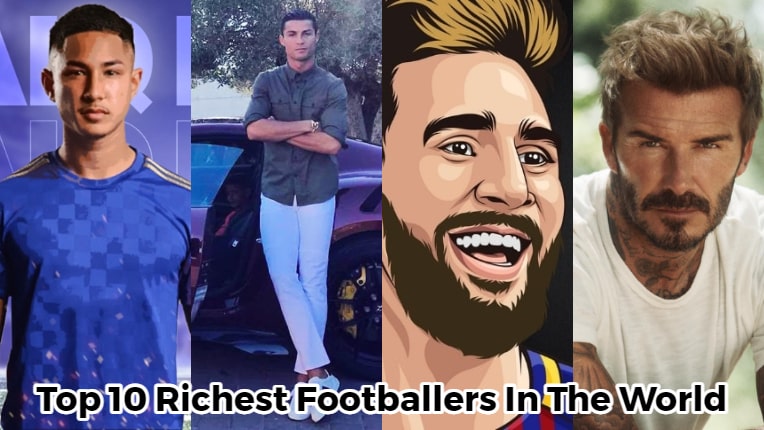 Richest footballers in the world in 2022-23: Football (soccer) is a lucrative sport that is played in over 200 countries around the world. Football players aren’t overpaid. They earn high wages as a result of market forces such as supply and demand.

Furthermore, the matches they participate in generate millions and billions of pounds each year. They are fairly compensated for the uniqueness of their abilities and the amount of revenue they generate. DEALS ON ENDORSEMENTS: This is one of the main reasons why male footballers are paid more than female footballers. Soccer clubs tend to attract more sponsorship deals from male outfits than female outfits, and this trend has been consistent across almost every club in every country.

Soccer is one of the most-watched sports in the world, with over 250 million people participating. Given its popularity, it’s no surprise that many footballers were able to land multi-million dollar/euros contracts with prestigious sports associations and teams. As you read this, you’re probably thinking about who are the richest footballers in the world right now in 2022-23.

1. Faiq Bolkiah Is The Richest Footballer In The World With a US$20.15 billion Net Worth

Faiq Bolkiah spent a large portion of his youth career at academies of well-known clubs. His first taste of English football came through AFC Newbury’s youth academy. From 2008 to 2009, he worked at the club. Bolkiah then transferred to Southampton FC, where he stayed from 2009 to 2011. He then had trials with Arsenal FC in 2013 and Chelsea FC between 2014 and 2015.

Bolkiah’s most well-known stint in English football was with Leicester City FC, where he joined in 2016. This is when the football world became aware of the world’s richest footballer. He spent four years with the Foxes, causing quite a stir in the English football community. When it was revealed that Bolkiah is the world’s wealthiest player, it came as quite a surprise. However, it is not his footballing ability or stature in the game that has earned him his fortune. Unlike most football players, who become extremely wealthy as a result of prize money, lucrative employment contracts, and sponsorship deals.

Faiq Jefri Bolkiah is a member of the Brunei Royal Family. He is the captain of the Brunei national football team and a striker for Thailand’s Chonburi club. He has represented Chelsea Youth and U18 teams, Leicester U18 and U23 teams, Southampton ACA, Newbury Youth, Maritimo B, and Maritimo. The market value of the Bolkiah is €200,000. Yes, Faiq’s father is the mega-rich Prince Jefri Bolkiah, the Sultan of Brunei’s younger brother. A man described in a 2011 Vanity Fair profile as a “notorious playboy” who had “probably gone through more cash than any other human being on the planet.” He is worth $20.15 billion in 2022.

Cristiano Ronaldo is a Portuguese footballer who is widely regarded as the world’s second-richest footballer, with an estimated net worth of $650 million by the year 2022. He also has a transfer market value of €30 million ($31.70 million) and numerous lucrative sponsorship deals with Nike, ZTE, KFC, Samsung, and other brands. Ronaldo’s contract with Nike is said to be worth $1 billion throughout his career. Cars are one of Ronaldo’s favorite pastimes. Cristiano Ronaldo has a long list of accomplishments. He has five Ballon d’Or awards, numerous UEFA and FIFA Best Players awards, four Golden Boot titles, and other prestigious awards.

He is the world’s most skilled footballer and the former captain of the Barcelona national team. Messi has a net worth of $600 million and a market value of €50 million ($52.94 million). Lionel Messi recently relocated to PSG after his contract at Barcelona expired. Messi earns an estimated €3,375,000 per month at PSG, which works out to €40.5 million per year and nearly €779k per week, according to L’Equipe. In 2022, the king of football will be the third richest but highest-paid soccer player in the world. He signed a contract with Barcelona that pays him a base salary of $168 million in 2017 and an annual salary of $40 million from endorsements (including a lifetime endorsement deal with Adidas). Messi and the French club (PSG) agreed to a two-year contract extension through June 2023, with a third-year option.

As of 2022, David Beckham is ranks fourth as the richest player in the world list. A legendary English soccer player who achieved international acclaim for both his on-field performance and his highly publicized personal life. Beckham’s net worth is estimated to be around 450 million dollars, which is not surprising given his reputation both on and off the field. David Beckham’s sponsorship deals with Pepsi, Samsung, H&M, Haig, and Adidas. Many of these deals have been expertly framed to ensure that he earns more.

The Brazilian footballer plays for the Brazilian National Team as well as Paris Saint-Germain. He has also represented two prestigious clubs, Barcelona and Santos FC. What is Neymar’s estimated net worth in 2022? Neymar, the Brazilian football star, is expected to have a net worth of around 220 million dollars in 2022. Neymar is one of the world’s highest-paid footballers. In 2017, he agreed to a five-year contract with Paris Saint-Germain worth €222 million. He also makes between $35 to $40 million per year from endorsement deals with Nike, Panasonic, Ambev, Lupo, Unilever, and Volkswagen. Neymar’s net worth is $220 million, scoring 100 goals and helping the club win four Ligue 1 titles.

Wayne Rooney has had an incredible career since breaking onto the scene as a 16-year-old in 2002, breaking records with Manchester United and England. A nearly two-decade career in the Premier League, including a trophy-laden 13-year stint at Old Trafford, combined with a stint in Major League Soccer has ensured the striker a rewarding lifestyle. Wayne Rooney holds the record for both the England national team and Manchester United. Wayne Rooney’s net worth is estimated to be $170 million as of 2022, making him the world’s 7th richest soccer player.