Skip to content
Home » Do you know why soccer (football) is the most popular sport in the world? 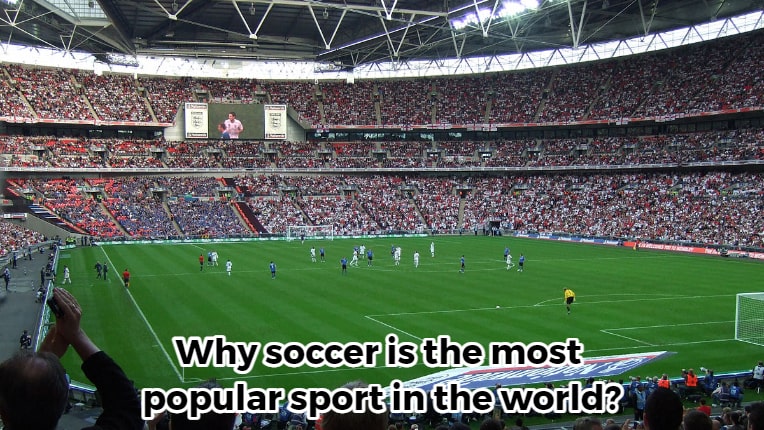 If you want to know why soccer is the most popular sport in the world, you’ve reached the right place. Yes, soccer is one of the most popular sports in the world, and as a result, many people enjoy participating in it. It is one of the games that requires equal amounts of upper and lower body strength. Furthermore, playing at an elite level necessitates a wide range of wellness.

More than four out of ten people consider themselves Football/Soccer fans, making the sport the most popular in the world. Having multiple leagues in multiple countries allows for international club competitions such as the EPL (English Premier League), La Liga, Ligue 1, and UEFA Champions League, which pits soccer clubs from various countries against one another. Soccer is so popular because it attempts to decentralize competitiveness and promotes the realization of international competitions.

So, what makes soccer the most popular sport in the world with a huge fanbase? There are multiple factors to consider, but the most important is soccer’s decentralization, which means that it is played globally rather than just in one region. Other factors, such as its low cost of entry and simplicity, contribute significantly to its growing popularity.

Let’s take a look at a few main reasons- What makes soccer so popular? Everything you need to know about football, & why is soccer the most popular sport in the world?

Soccer is played by over 250 million people in over 200 countries, according to Bundesliga.com. It is most popular in Europe, Central and South America, and Africa, but it is gaining traction in North America and Asia. According to a survey, professional soccer, also known as football in the rest of the world, is truly an international sport.

According to estimates, there are over 240 million registered soccer players worldwide, with billions of fans participating. Soccer, which originated in twelfth-century England, is the world’s most-watched sporting event. People are now obsessed with famous soccer leagues, and FIFA World Cups, and it has become a part of their daily lives. Soccer has successfully captured the attention of the global audience and brought the world together as one.

What makes soccer the most popular sport in the world?

No one knows when soccer was invented, but the earliest versions can be traced back around 2,000 years or more. Soccer is the most popular sport in the world with billions of supporters. Soccer originated in England around the mid-nineteenth century, when several clubs formed the Football Association. It’s incredible how people all over the world treat soccer as if it were a religion.

Soccer is the only sport capable of paralyzing entire cities and countries for a single game. In the end, what makes soccer so unique is its ability to bring people from all walks of life together and create a universally positive experience. The international game excels at this, and some of the world’s famous clubs are not far behind.

The more people who participate, the more competitive it becomes. People are drawn to play and especially to watch sports because of competition. Most World Cup and Champions League games are very close, and teams will do whatever it takes to win, making the game very entertaining to watch.

Can soccer be played anywhere?

Soccer has a significant advantage over other sports because it is played outside. But what’s even better is that soccer is one of the few sports that can be played both outdoors and indoors, which means it can be played almost anywhere. Soccer can be played on fields, streets, courts, and almost any other surface.

Where do they play soccer?

Soccer is played on a rectangular field called a pitch, with goals at either end. For international adult category clubs and international matches, the pitch can be 110-120 yards long and 70-80 yards wide.

Is soccer easy or hard?

Soccer is a relatively easy sport to learn. The intent of kicking the ball into a goal is simple, the rules are simple, and the scoring system is simple, making it an ideal game for children of all ages. To make a game as popular as possible, anyone who hasn’t seen it before must understand the basics of it the first time they see it.

A person who has never watched a game before, especially basketball, baseball, or football, will not understand why soccer is the most popular sport in the world and easy to play. Some will know how to run the bases correctly, or what an inning or an out is. Soccer is a physically and mentally taxing sport that requires players to make their own decisions while in the heat of battle. Unlike many other sports, there are no timeouts to regroup and adjust what is and is not working. Some people who have never played soccer believe it will be a difficult game to learn. Some soccer positions do not demand a high level of skill.

The basics of a soccer game are simple: Every player has 90 minutes to make the ball go into the opponent’s goal as many times as they can while not using their hands. A goal is worth one point, and the team who has the most goals wins. Anyone can easily understand this soccer rule. Someone who has never played soccer before can quickly learn the game’s more complex rules, such as assisting, forward, striker, wingers, center-back, goalkeeper, midfielders, penalties, yellow card or red cards, and much more.

Read also- The central midfielder, the centre-back, and the goalkeeper are the most important positions in soccer

Focus in Soccer: Why is focus important in soccer?

Soccer players must have superior technique, which includes ball mastery and control. They must be physically fit, with sufficient endurance and strength. A soccer player’s greatest strength, however, is mental. High-level soccer players have exceptional mental fortitude. Soccer, in comparison to other sports, is a soccer game that is more player-focused. In a soccer game, people can rely on individual plays from a single player more than in other team sports. It allows the players to shine, which is extremely satisfying for anyone.

In comparison, some of the best soccer players, such as Cristiano Ronaldo, Lionel Messi, and Neymar, are the most popular. The coach directs the game, calling every move that the team will make, and the players must obey all of his instructions. In soccer, players must also follow their coach’s instructions, but if the team’s strategy isn’t working. One better player can always change the game with individual play. Football allows you to play the game with fewer restrictions and allows you to shine more on the individual side. Something that every soccer player would enjoy.

History Of Soccer: How did soccer begin?

Soccer goes back more than 2,000 years to ancient China, according to records. Although Greece, Rome, and parts of Central America claim to have invented the sport, it was England who transformed soccer, or what the British and many other people around the world call “football or soccer” into the game we know today.

Soccer is one of the oldest sports still rehearsed today. According to FIFA, “ball games” similar to soccer were played in the United Kingdom as early as 206 B.C. The game has evolved significantly since then, and it wasn’t until 1857 that Sheffield F.C, England’s first soccer club, was founded. The FA Cup, which was first played in 1871, is the oldest soccer competition still being played today. The first official associated soccer game between two nations was played on November 30, 1872, between England and Scotland. Everything escalated quickly, and the first World Cup was held in Uruguay in 1930.

One of the reasons soccer and the World Cup are so popular is that they are a pleasure to watch. These events have contributed to the development of soccer culture and tradition.

Read also- The Greatest French Football Players Of All Time

Why soccer is so passionate and so emotional about soccer?

People are drawn to sports by their passion. People enjoy watching soccer because the sport plants in them a sense of passion. So, what causes this? Because of a variety of factors, the most important of which is the pride and affection that fans and players have for their soccer clubs and teams.

Soccer fans, on the other hand, become so attached emotionally to their teams. Soccer fans experience hormonal surges and other physiological changes while watching games, much like athletes. People become so engrossed in it all that they feel every high and every low that their favorite team goes through, resulting in mood swings throughout each game. A University of Georgia study discovered that “testosterone levels in male fans rise markedly after a victory and drop just as sharply after a defeat.” The same pattern has been observed in male animals fighting for a mate.” That is some serious science.

Short Time: How long does it take to watch a soccer game?

A soccer game lasts 90 minutes and is divided into two 45-minute halves. You could spend up to two hours watching a soccer game. The duration of professional football matches is 90 minutes plus 5-10 minutes extra. In comparison to other sports, this is a very short period. According to research, simply watching others play soccer, or any other activity can improve your playing skills.

When a sporting event lasts too long, the mind becomes tired and bored of watching it. I hope you are familiar with that example. Test cricket matches are five days long (30 playing hours). The chances of completely watching a soccer game are higher than in other sports. Aside from being shorter in time, the game is also faster and more active. This helps soccer become a more popular sport in the world because people don’t have to devote as much time to watching.

Loyal Fans: Why soccer has so many fans? or Why are football fans so loyal?

Tradition and devoted fans are two of the reasons soccer is so popular in the world. Football fans are extremely loyal to their team, just as our ancestors kin groups would have been. Identity fusion refers to the intense sense of belonging that a person feels when they are one with their group.

What are the most popular sports in the world?
Soccer is the most popular sport in the world, followed by cricket, and basketball. The FIFA World Cup is the most-watched sporting event, with approximately 4 billion viewers. According to audience data for official broadcast coverage of the 2018 FIFA World Cup, 3.572 billion viewers more than half of the global population aged four and up – tuned in to world football’s ultimate competition. The UEFA Champions League, however, is the most-watched event each year.